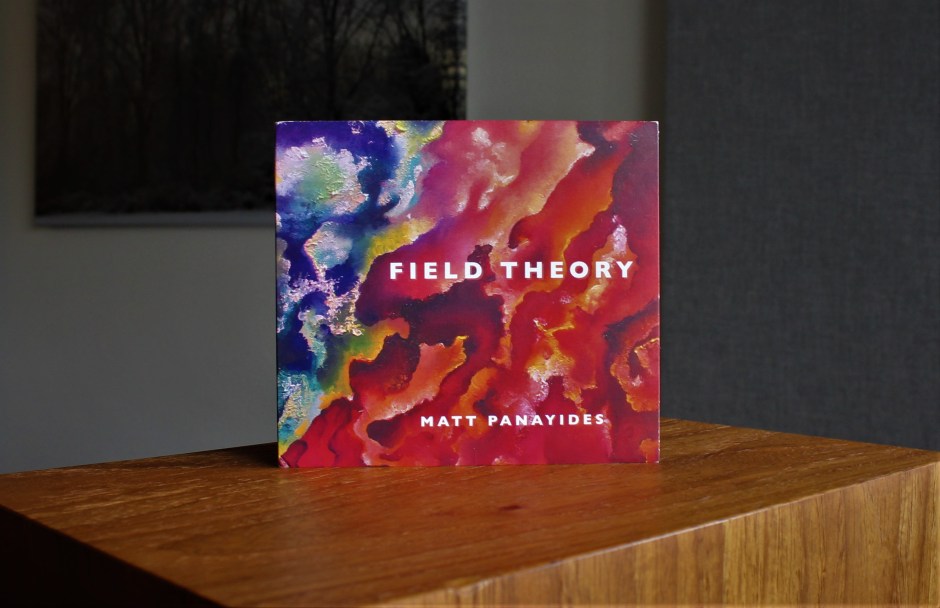 Contemporary jazz, by design, can be easily divided into things you’ve heard before and things you haven’t heard before. If that sounds like oversimplifying, and maybe it is, then think of a jazz album that isn’t either a tribute to past traditions and compositions or a venture out into the unknown. That latter group, the one that drives the momentum of jazz, can be problematic for casual listeners (think of free or experimental jazz genres), but there are times when it came be merely original, as is the case with guitarist Matt Panayides and his new album Field Theory.

Matt Panayides isn’t so far out there that you’ll wonder if he’ll ever come back, but he is making jazz that defies description. It isn’t outwardly strange or different music, but his quintet (Rich Perry on tenor sax, Robert Sabin on bass, Mark Ferber on drums and–here’s a twist–Matt Vashlishan on wind synth) is full of ideas, ones that escort you into a neighborhood where all of the houses look just a tad different than normal, a collection of shapes and light that inform you of your sudden departure from familiarity.

This is the third album for Matt Panayides, but his first two releases were a bit more traditional, falling under the vague heading of “acoustic modern jazz.” Field Theory mixes electric and acoustic sounds, prompted by Panayides’ interest in guitar peddles and effects and further encouraged by Vashlishan’s contributions on an Akai electric wind instrument (EWI). These two, who have played together for years, started laying the foundation for the music on this album using the inspiration from this partnership.

The equation for this album is described in the liner notes as “tightly structured arrangements with dissonant harmonizations with ample space for improvisations,” and while that seems to describe much of contemporary jazz, it is also an accurate tag. Matt Panayides and his crew come to you as friends, friendly guides who want to show you what they’ve discovered, and the strangeness comes after they have earned your trust. Field Theory isn’t wild or uncontrolled, but it is thoughtful and weird and yes, completely original, something that becomes more and more rare and difficult in jazz as the years pass by.

The Jeff Rowland Design Group Capri S2-SC preamplifier and Model 125 amplifier are soooooo tiny. How tiny are they? When the boxes arrived at my front door, I said “This can’t be right. These boxes […]

This isn’t the first time in the last few months where I had to explain my reasoning behind reviewing a certain component. Take this new Sumiko Amethyst cartridge, a moving-magnet cartridge that retails for a […]