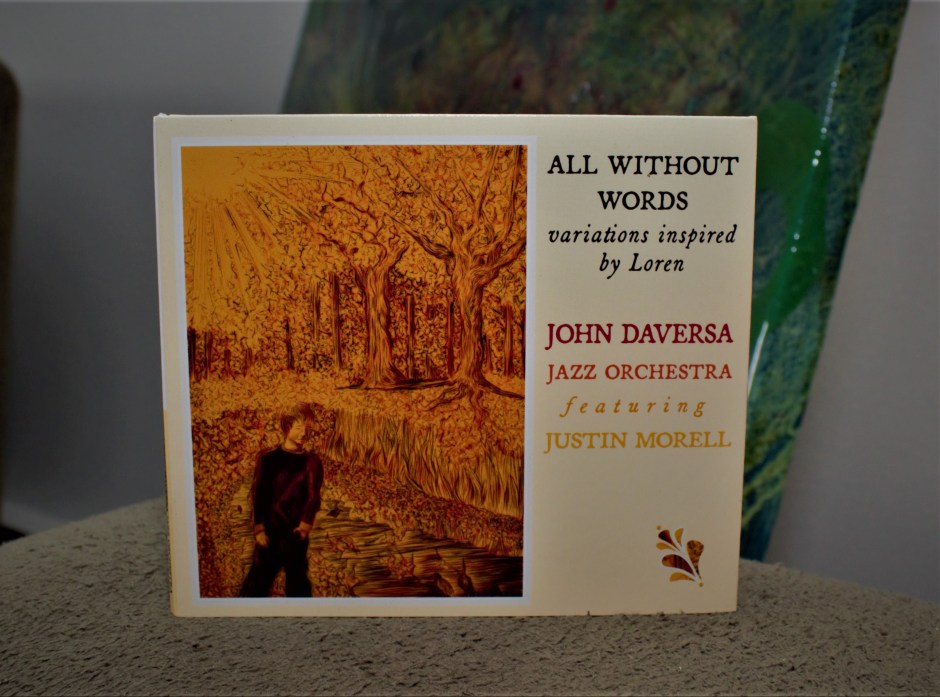 The John Daversa Jazz Orchestra (website) is certainly on a roll. Last year there was a Grammy amid a string of beautiful recordings with socially-conscious themes such as DACA Dreamers, and quarantining with your family and strengthening those bonds. Many of these albums have featured vocalists and/or spoken-word performers, so it’s striking that the latest album is named All Without Words.

It’s exactly like it sounds, a rich jazz orchestra, led by a master trumpeter, performing ambitious instrumentals that sound like they could be part of a movie soundtrack. We’re not talking just any soundtrack, but something special and distinctive like Bernard Herrmann’s score for Taxi Driver, something that tells stories without words. Another surprising element is the choir that accompanies the John Daversa Jazz Orchestra–again, performing without words, but soaring just as high as the musicians.

That story, however, is fascinating here. Justin Morell, a guitarist, composer and longtime friend of the John Daversa Jazz Orchestra, composed All Without Words: Variations Inspired by Loren as a trumpet concerto about the “trials, tribulations, successes, and heart-warming moments of raising a 16-year-old non-verbal son.” Morell’s son Loren lost his ability to speak at age three, so this music speaks for him in more way than one–the melodies here were inspired by some of the “singing” sounds Loren makes, and Morrell captured them on his cell phone and started composing from there.

The John Daversa Jazz Orchestra certainly treats this composition with the sensitivity it deserves, but Daversa goes one step further. His trumpet here has a little more intensity than in the past recordings I’ve heard, and there’s subtle shadings–despair, frustration, introspection–that give this dynamic music and intense and consistent mood, one more layer to the meanings. That suggests the genius of John Daversa and Justin Morell, and how they created a piece of music that is so vivid and perhaps even loquacious that it doesn’t need words.

From the moment I heard the news that John DeVore, of DeVore Fidelity, was going to expand his Orangutan line on the entry-level side of things, I knew I needed a listen ASAP. I’ve been […]

This isn’t the first time in the last few months where I had to explain my reasoning behind reviewing a certain component. Take this new Sumiko Amethyst cartridge, a moving-magnet cartridge that retails for a […]