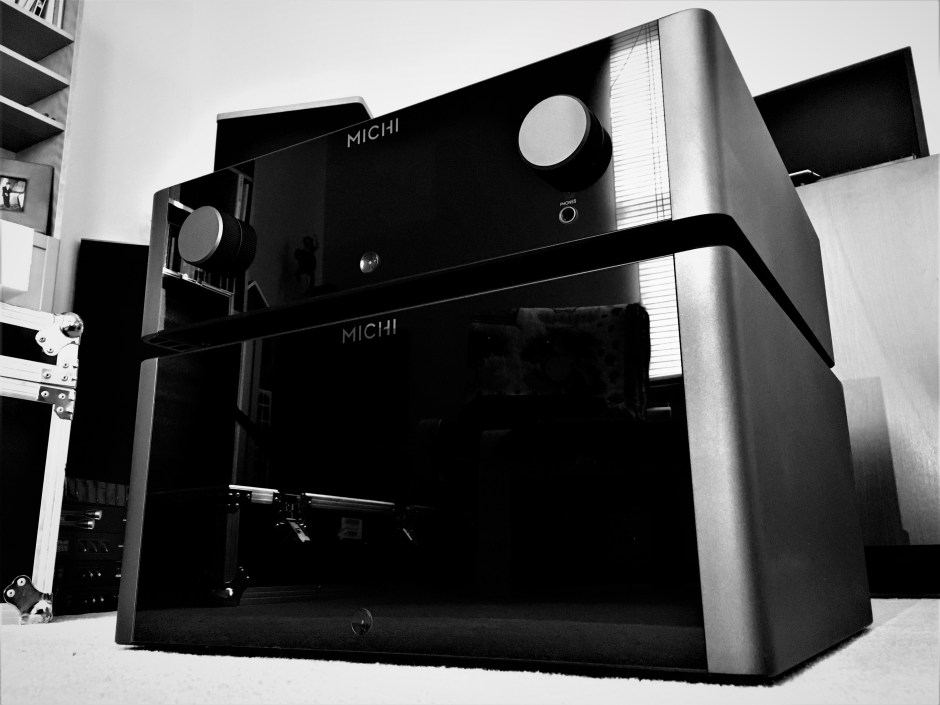 Harkening from the Land of the Rising Sun, the Rotel Michi P5 Preamplifier and Rotel Michi S5 Stereo Amplifier presented an imposing pair in my listening room. Weighing in at a hefty 50 lbs. for the P5 and 132 lbs. for the S5, these units are as daunting as a sumo wrestler, but as stately looking as a Gundam battlesuit.

When Julia Lescarbeau from The McIntosh Group asked if Part-Time Audiophile was interested in some Rotel, I quickly raised my hand. Marc Phillips had favorably reviewed the Rotel A14 integrated not too long ago and I was interested in what Rotel had to offer as I haven’t heard them in quite some time. (I know this is a recurring theme, but with COVID-19 the opportunity to get to dealers and shows is limiting my ability to get out and hear gear.)

Little did I know that Ms. Lescarbeau was sending me a 324 lb. freight delivery! Once I unpacked the pallet of gear, I put on my weight belt to lug the huge Rotel Michi S5 out of the box and set it up in my listening room.

Everything about the Michi equipment oozes class. The black glass on black chassis with matte black/grey heat sinks looks very noir, but also makes a lifestyle statement. I’ll get into more details of the Michi’s looks and functionality below, but Michi is not your run-of-the-mill Rotel.

Michi is the culmination of nearly 60 years of Rotel design, engineering and manufacturing expertise of high-performance, high-quality audio and video products. The new Michi series is much more than a simple product evolution. Michi is a true revolution in acoustic performance at an exceptional price-point ensuring audiophiles, music lovers and casual listeners alike will enjoy countless hours of entertainment. 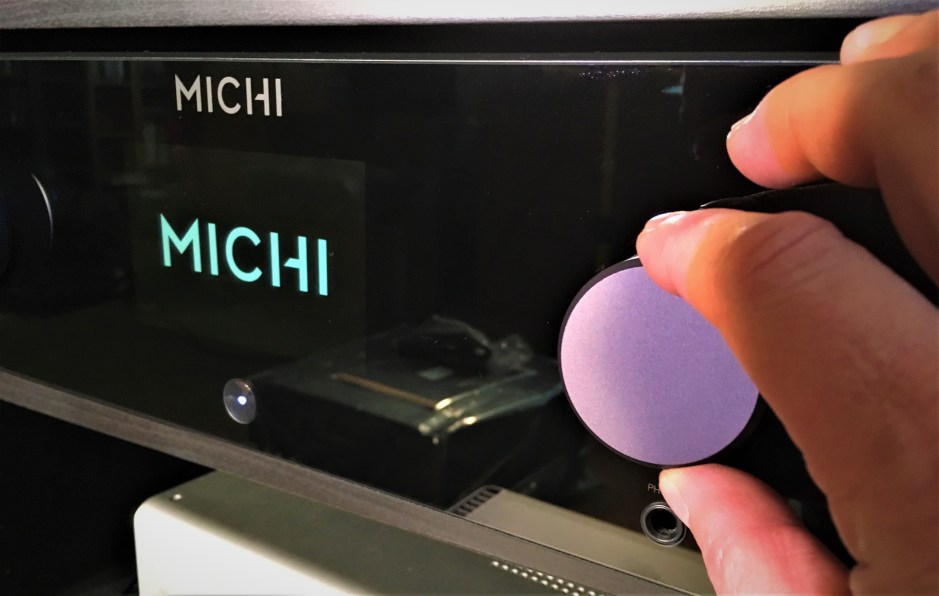 What’s in a name?

Rotel introduced the original Michi line in the mid 1990’s. Rotel’s flagship line has recently being re-released after a hiatus.

Michi, translated from Japanese, means “road” or “path.” Rotel took a new design philosophy with this iteration of the Michi line. Rotel allowed their engineers and designers a no-compromise approach to the Michi line with no specific design schedule or cost/budget requirements, which resulted in three years of product development. Pushing the design team to the point of potential failure was the goal of upper management, and they felt that Michi accomplished the rigorous
specifications they developed for themselves.

As a martial artist I am familiar with the concept of Michi. In martial arts we usually use the term do, which also translates as “way” or “path.” In either case it points at the lofty and unachievable goal of perfection. The journey and the sincere attempt at reaching perfection is the philosophical point of the exercise. Americans would likely translate this as “be the best you can be.” I completely understand the choice of Rotel’s flagship moniker and associated design philosophy. 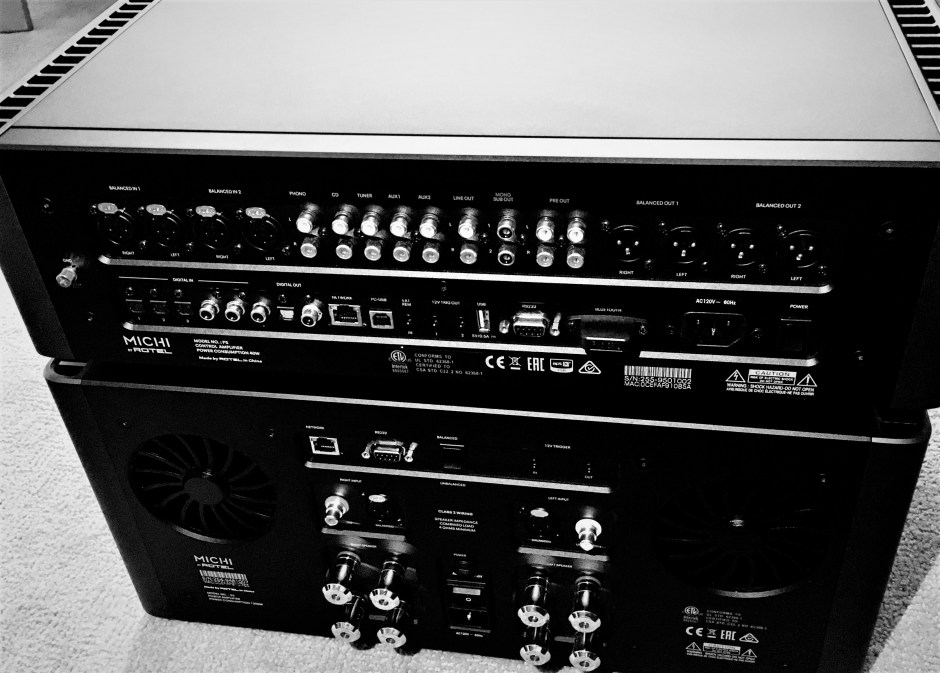 Looking at the Rotel Michi P5 Preamplifier, you’ll notice that it has two large knobs on the front, which has a glass plate with a black backing. Once powered on, the P5 has a video screen in the center that shows a variety of functions as they are selected. The left knob controls source inputs and the right is volume. Like everything else about the Michi gear the knobs are large, solid, and authoritative. The P5 screen displays source, volume, and when asked a variety of other user adjustable settings like tone controls and balance. All of these functions are accessible via the remote control.

The Rotel Michi S5 Stereo Amplifier is a beast, as I said before. Inside the belly of this sumo warrior are two toroidal transformers, hefty capacitors, and other Class AB solidstate gear pumping out a massive 500W in 8Ω and 800W into 4Ω. The amplifier is not recommended to drive loads under 4Ω.

The S5 also has a black glass face with a digital display. The display shows a variety of information not normally seen on amplifiers. I especially liked the right and left channel frequency meter and level. Besides the blinky-lights charm you can see the frequency and level of the music, which can be helpful as well as mesmerizing! For example, I was seeing serious low bass content on some music but could not hear any of it on one of the speaker systems I was using, the excellent but short of subterranean Living Voice loudspeakers. It also gave me insight into my personal hearing, when I saw the 10kHz bar pop up I wanted to make sure that I was hearing that signal (I’m getting older and am curious how high a frequency my ears can hear).

Both units use either single ended (RCA) or balanced (XLR) inputs and outputs. I used both to great effect. The P5 has a plethora of input and output options including Bluetooth, a built-in DAC, phono stage, and several additional source inputs.

Using Rotel Michi electronics was very easy. The remote control is nice, but a bit thin for my hands as I found myself trying to select the volume control and inadvertently pressing buttons higher up the remote. The remote is functional and well thought out but I wish the volume controls were a little closer to the other buttons. The remote is an essential part of
the P5 operation as trying to navigate through everything with only the knob on the preamplifier is possible, but not the most efficient way to do things. 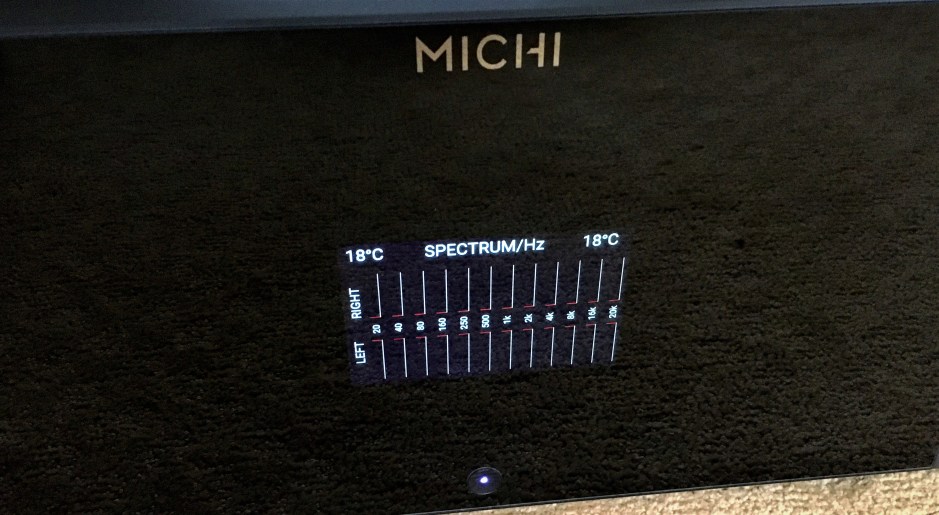 The Rotel Michi gear strikes me as a lifestyle product. What I mean is I can see this gear in a hi-end system appreciated as much for its striking looks, elegance, and technology as it is for the hi-fi audiophile qualities it brings to the mix.

For example, straight out of the box I connected my phone to the Bluetooth and was playing music in literally less than a minute. I know most of our purist readers will scoff at the Bluetooth, but it sounded pretty darn good. Firing up a music server or putting on an LP will take far longer than walking into the room, hitting the power button and saying “Hey AI bot of choice, play music” and bang, the Michi is pumping out the bass via Bluetooth. 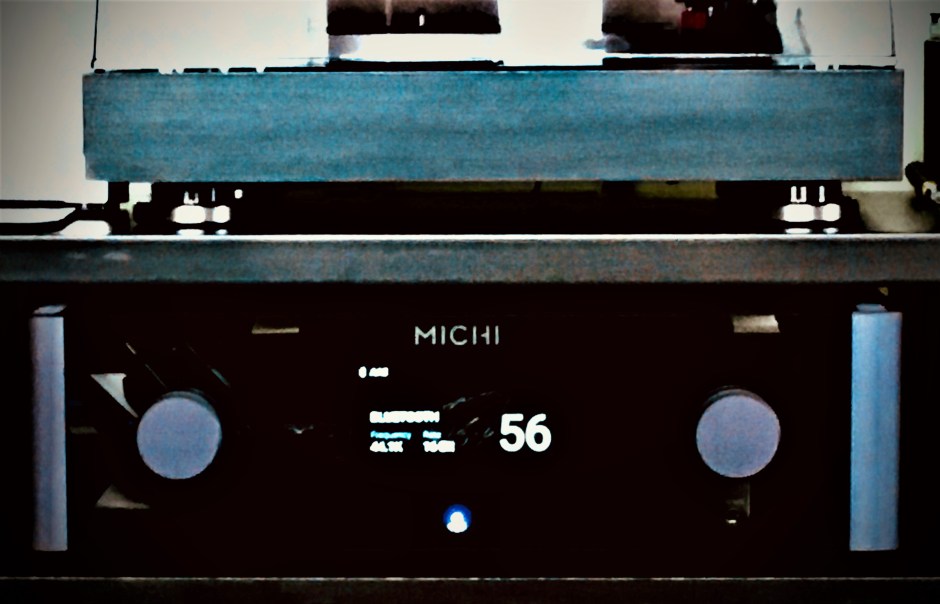 Thank You Ma’am, May I Have Another!

Speaking of bass, the Rotel Michi S5 Stereo Amplifier generated the most prolific bass of any amplifier I’ve had in my setup. Bass was voluminous, deep, and authoritative. I checked the tone controls more than once thinking “There has to be an EQ somewhere in this menu that is turned up!”

Looking at the damping factor of 350 didn’t reveal any insight into why the S5 is such a bass monster, but I don’t care. I don’t care if it’s flat or colored. I will eat my full plate of bass, with bass falling off the sides, and come back to take a second helping – that’s the kind of bass that the Rotel Michi S5 delivers.

Not every speaker will appreciate or sing with the S5. The very good Living Voice OBX-4RW sounded fine with the P5/S5, but the efficiency of the speaker lends itself to lower powered tube amplification. Now the Vandersteen Model 3, a relatively inefficient speaker, loved the Rotel Michi S5 and thump, thump, thumped it up. The midrange wasn’t as clear as other amplifiers, especially some of the recent tube gear I’ve had, but the music was lively and engaging with the super deep bass foundation.

The Rotel Michi S5 and P5 combination was the most fun I’ve ever had with my Vandersteen Model 3s. Music was engaging with great body and fullness. Soundstage and imaging were good, not the greatest I’ve heard, but the Michi equipment had a groove thing that it did that made you not care if the music was accurate or if the soundstage was a palpable as some other gear. For those of you who want to bob your head, tap your toes, and get up and dance – this is for you. 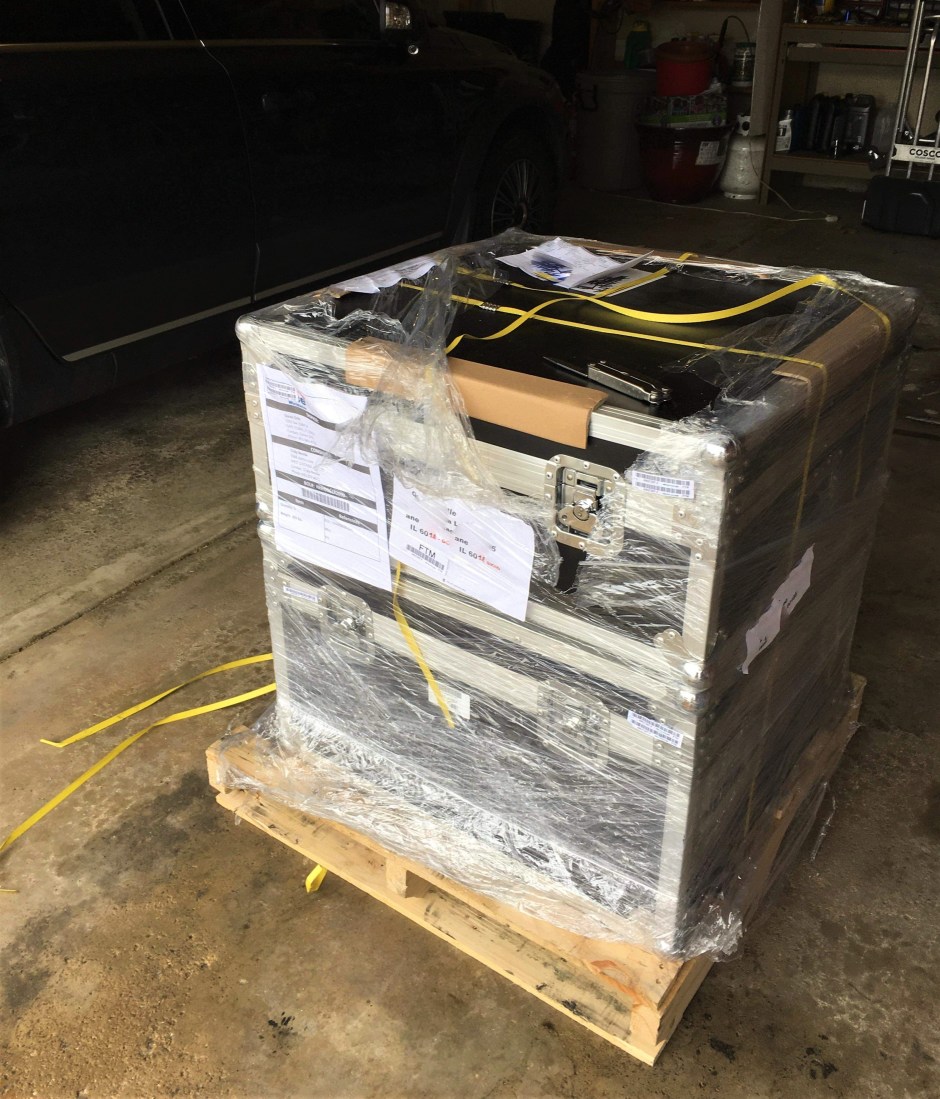 All for One and One for All

Digging deeper into the technical aspects of the P5, the DAC is quite good. It isn’t on the same level as my Schiit Audio Yggdrasil DAC, but it is close enough that I don’t mind. The Yggdrasil had a presence and body around the instruments that the P5 DAC couldn’t match, but for an all in one system with Bluetooth and a plethora of digital inputs the DAC was quite good and I can’t imagine too many folks having any complaints.

The phono stage on the P5 was fine. It was slightly better than my inexpensive reference phono preamp, the Schiit Audio Mani, but for hard core vinyl lovers you will probably want something a bit better. If you just want to spin some LPs and follow the vintage band wagon the Rotel Michi is probably not your jam.

In my opinion, the Michi P5 is really setup for digital and has great functionality. Music is clean, energetic, and toe-tapping. As I mentioned before the P5/S5 combo has monster bass and grooves, but it is not an imaging or soundstage revelation. With that in mind I think the Michi definitely caters to a certain clientele with big inefficient floor standing speakers that needs lots of current to move crazy amounts of air. The Michi in this configuration is not a petite ballerina, but a powerful sumo wrestler. 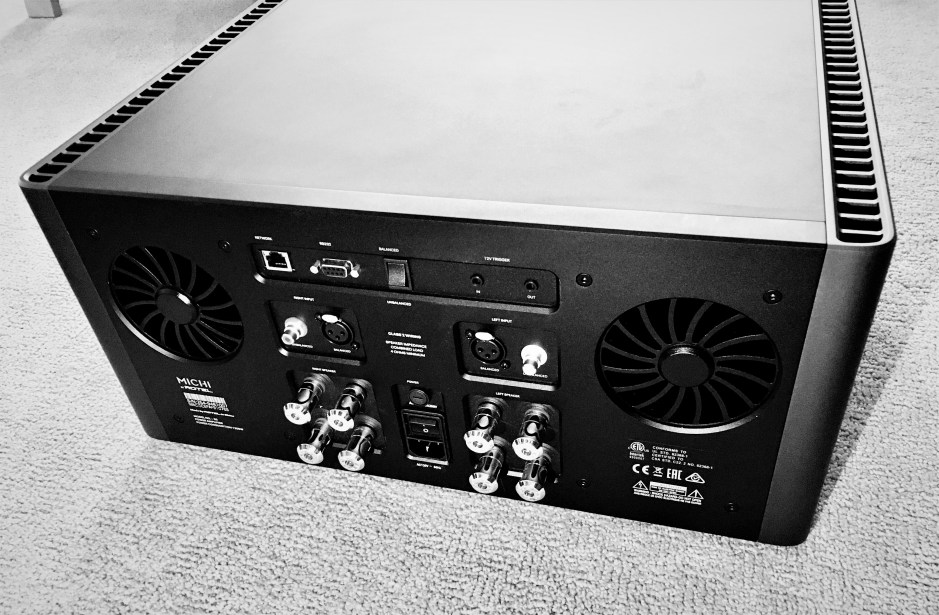 I did try a different amplifier, the recently reviewed Parasound Halo JC 5 Stereo Amplifier, as a comparison to the Rotel Michi S5 routed through the P5 Preamplifier. The JC 5 definitely had a more accurate presentation with more soundstage and imaging, while the S5 sounded more powerful and had far more bass presence and groove. 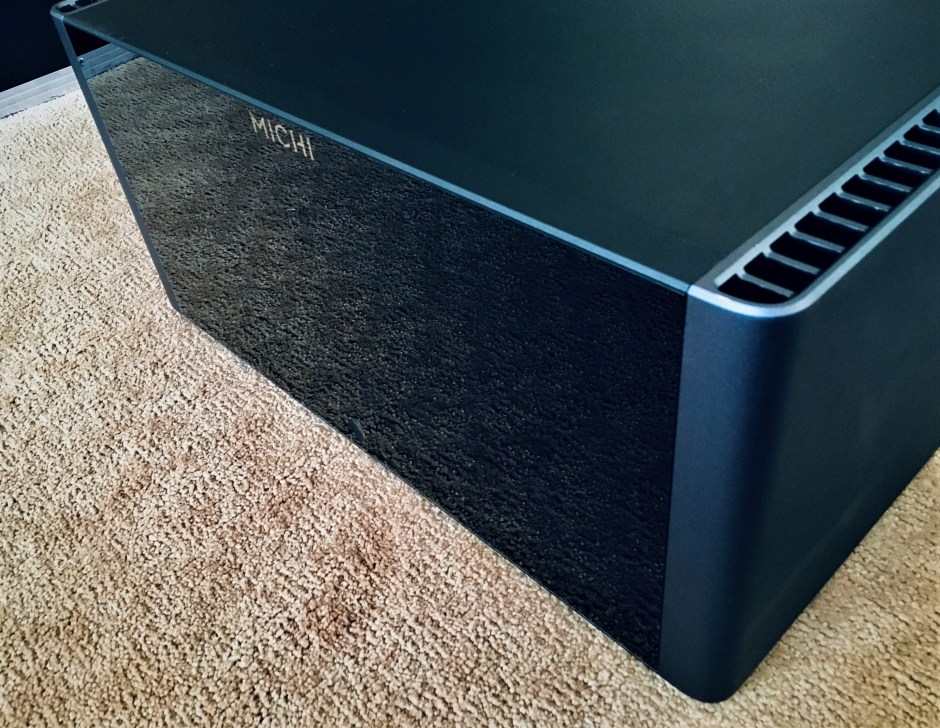 Sad Face Moment, Brought to You By Rotel Michi S5 and P5

The Rotel Michi P5 Preamplifier weighs in at $3,999.99, and the Rotel Michi S5 Power Amplifier’s MSRP is $6,999.99. For the sonics and features you get, this is in my opinion a reasonable price point for those looking for a lifestyle type of system to build around. I think the design team, that combines Japanese engineers and UK industrial designers has built something worthy of the Michi philosophy.

In the right conditions, the Rotel Michi can be a vibrant and enjoyable experience that bass heads will love. If you are looking for a high current, beautiful, and physically imposing, mostly digital system, driving large power-hungry speakers, the Rotel Michi S5 and P5 combination is a great choice that I can heartily recommend. 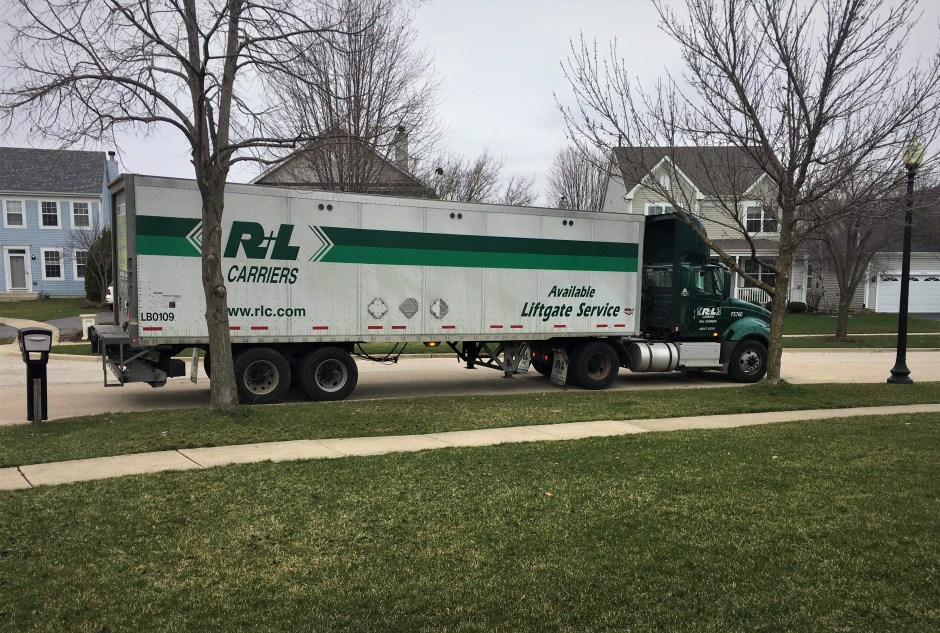 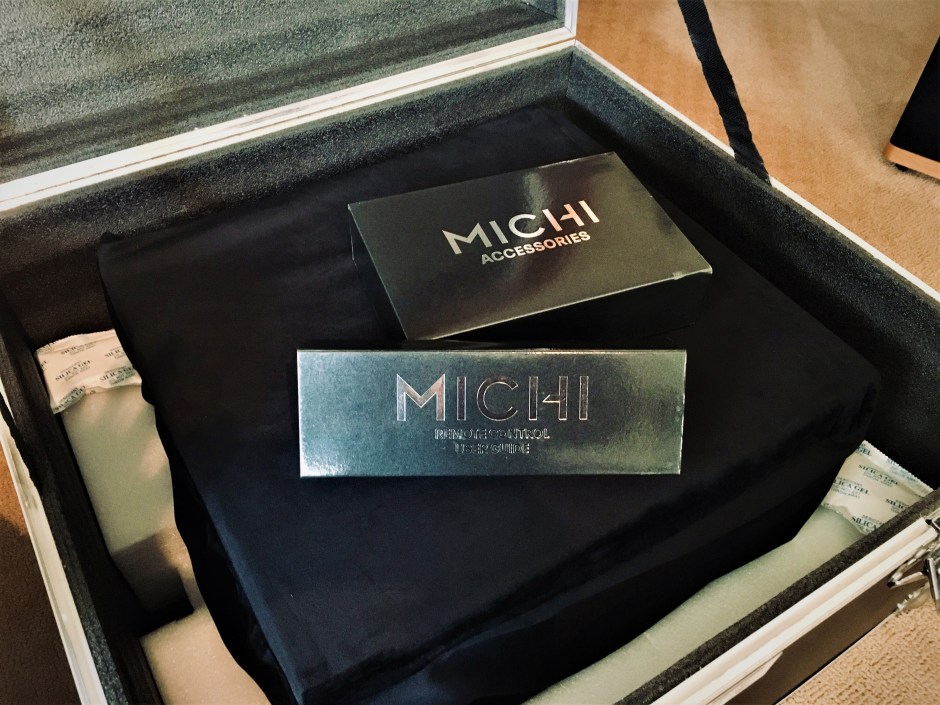 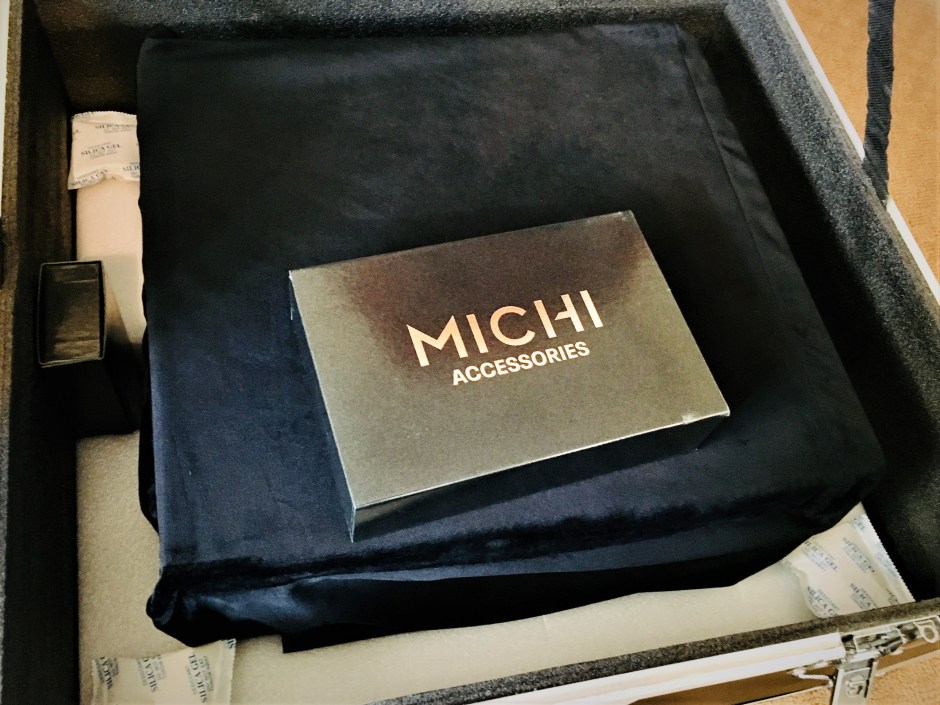 So I’m reviewing these Luminous Audio Technology Prestige III loudspeaker cables, ready to write down my impressions, and suddenly I remember that in my Raven Audio Soniquil cable review I spent all this time admonishing […]

Do I really need a music server like the Innuos Zen Mini Mk. 3 at this point in my life? I’m still pretty old school when it comes to physical media. I have large CD […]

Market and Value High-End Audio, as a market segment, is a weird and fickle beast. It’s not really even a single market at all, but rather an odd agglomeration of (not unrelated) segments, including consumer […]