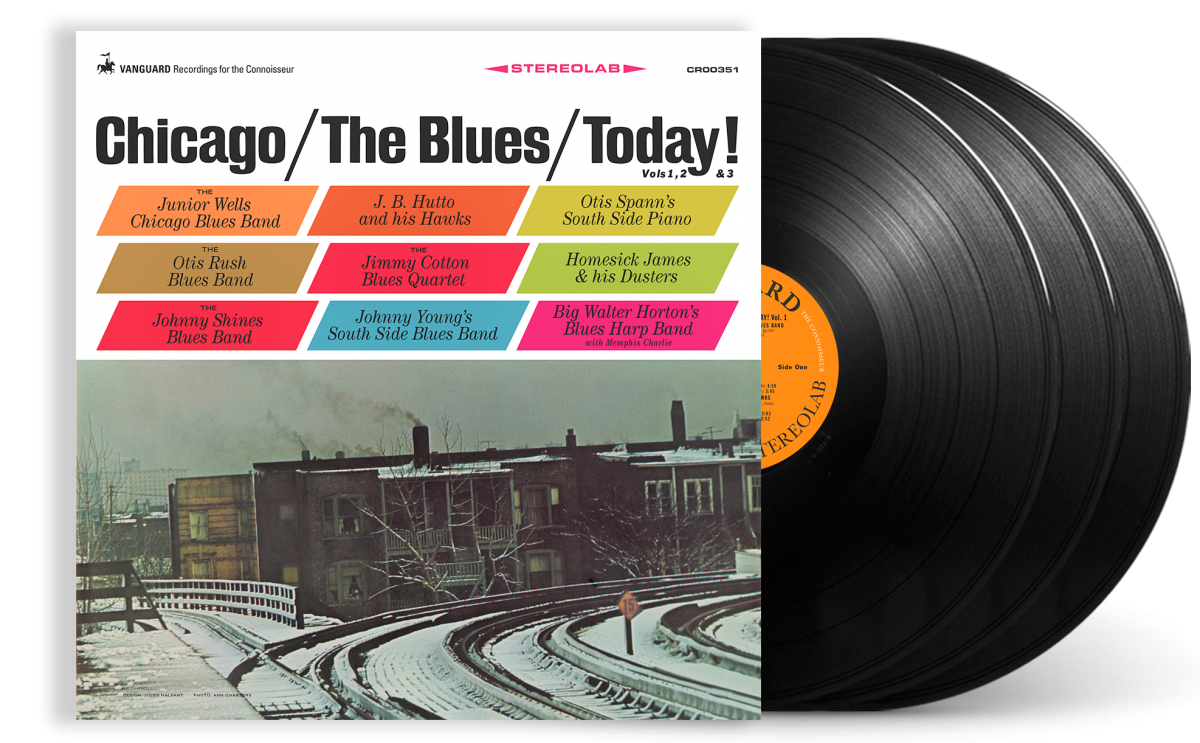 Every generation of music lovers should listen beyond the popular music of the day. If you don’t do the enjoyable, deep listening required to appreciate classical, blues, Brazilian, as well as other, more esoteric styles of music–think Klezmer, Sephardic folk, gamelan drumming, Bulgarian vocal choirs, pygmy water music–you’re only cheating yourself! Chronologically, the reverse also holds true: FKA Twigs, Flying Lotus, Terrace Martin, and other contemporary artists have much to offer. As the blues is one of America’s only original musical art forms, along with jazz and hip-hop, I believe we should shatter our 21st century preconceptions and dive deep into the musical and life truths found only in the blues. Craft’s recent RSD vinyl three-fer: Chicago/The Blues/Today! is a fine place to kick-start your journey.

Originally released as three separate LPs by Vanguard in 1966, these slices of then contemporary Chicago blues are impassioned, human, joyful, worrisome, and low down, then as now. There’s something loose, magical, shambolic, and undecipherable about the music of these master Chicago bluesmen. Theirs is rebellious music, waged by expressive, earthy musicians in throe to and expressing their passions. No click tracks, Pro Tools, software effects, or Autotune in sight, just raw groove, emotion, and yes, fun.

The modern ear might be taken aback by the relaxed time feels heard on Chicago/The Blues/Today!, accustomed as we are to unwavering, bloodless, computer time, which couldn’t be further from ideal time. That groove is constituted in the flesh and blood locomotion generated by the music of Muddy Waters, Son House, and Jimi Hendrix, to John Coltrane, Charles Mingus, and Miles Davis. Bruno Mars is not the blues.

Only the future knows what a generation raised on Artificial Intelligence-generated beats will contribute of their own musical passions. Music ultimately comes from the heart, not a whirring hard disc or software emulation. If the machines serve us, all well and good, but once the machines become sentient?

“In 1965 Samuel Charters at Vanguard Records asked nine different blues artists to come into the studio and record several songs each, so that he could produce a sampler of Chicago blues music,” states Wikipedia. “The albums made a significant impression on some now-well-known American and English rock musicians, who at the time had not had much exposure to electric blues.”

The electric Chicago blues was the bedrock of every ‘60s rock band from Led Zeppelin to the YardBirds, Cream, Rolling Stones, Deep Purple, on to Greta Van Fleet and the Black Keys. Imagine, if you will, the recording studios: relatively low wattage amplifiers, minimal micing setups, plate echoes, reel-to-reel tape machines. Lacking banks of effects to alter the music, what you hear on Chicago/The Blues/Today! is punchy urban blues as you would’ve heard at a local Chicago blues club, circa 1963. Chicago/The Blues/Today! is truly electric, joyous, communicative blues power.

The RSD release was produced by all analog mastering from the original stereo tapes by Kevin Gray at Cohearant Audio for a limited, 3000 worldwide vinyl run pressed at France’s MPO. The sound of Chicago/The Blues/Today! is visceral, nearly chewy. 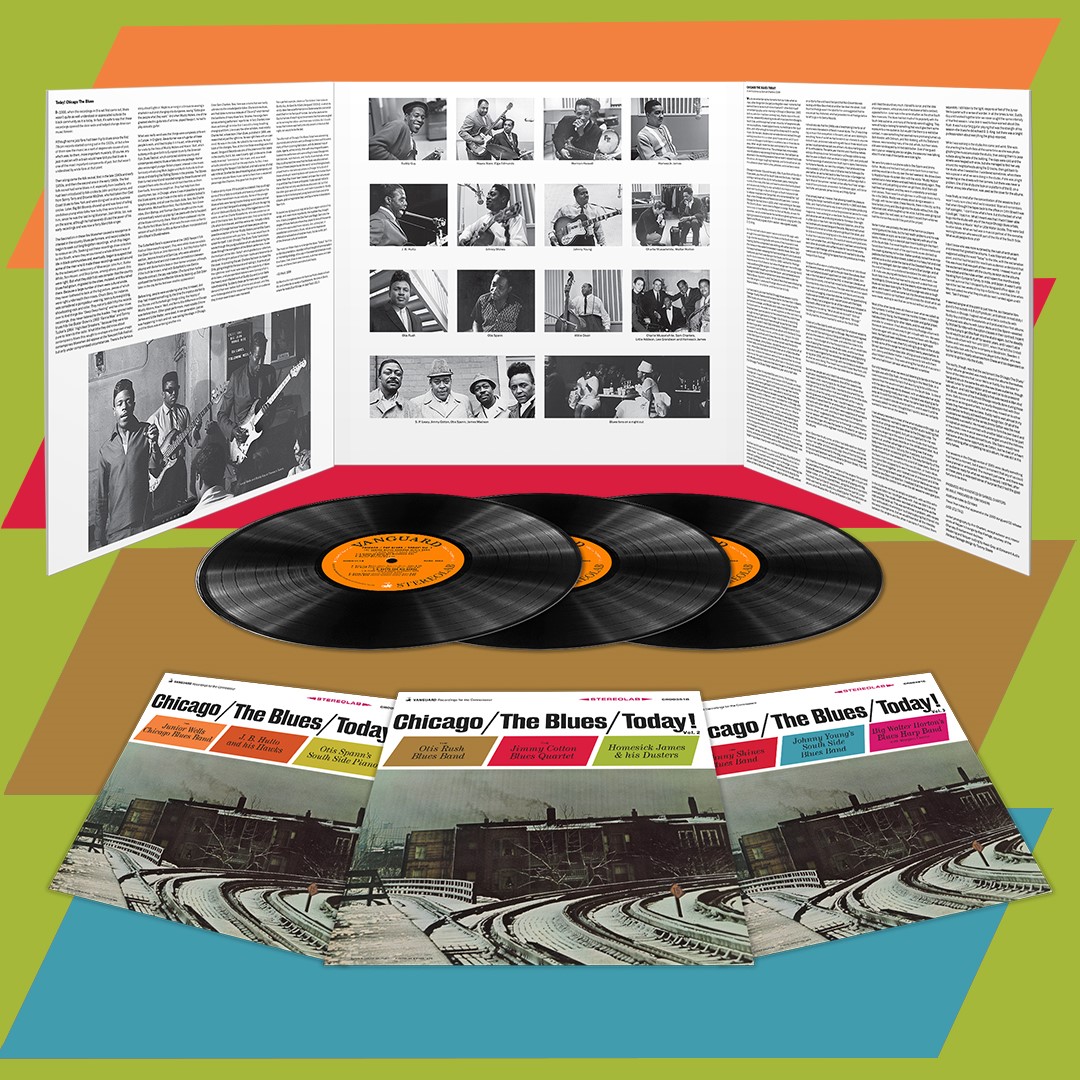 The Jimmy Cotton Blues Quartet proclaims “I ain’t gonna raise no more cotton” on the introductory blast of “Cotton Crop Blues” to open disc two of Chicago/The Blues/Today!. The deep spiritual mojo that fueled the original Allman Brothers Band motors Cotton’s band, which shuffles, burns, pounds and quakes through five tracks of fire-breathing blues. Their “The Blues Keep Falling” is slow and lazy, like the hot days of summer. Drummer S.P. Leary drives Cotton’s quartet like a man leading a funeral: slow, unhurried, the opposite of “slap happy.” The sound quality of the entire set is good, but the Cotton tracks are particularly fine and very transparent. Bass drum booms, Cotton’s voice is palpable, and the instruments sound as if they were recorded yesterday.

Guitarist Otis Rush, another major blues voice, brings a funky feeling and slinky guitar to “Everything’s Going to Turn Out Alright”; sweet, shuffling kinetic electricity to “It’s A Mean Old World”; and a big band feeling akin to Bobby Blue Bland’s on the hard-swinging “I Can’t Quit You Baby.”

Johnny Shines Blues Band recalls Memphis blues, with a beat. Shines’ quavering, yodeling vocal and brusque guitar are primordial and plaintive–half blues, half country. Big Walter Horton’s Blues Harp band with Memphis Charlie features harmonica great Charlie Musselwhite. Theirs is light, dancing, swinging music that seems untethered from earthly concerns. This blues is airy and propulsive, blues for driving and dancing before the drink has a chance to slow the blood.

A day spent enjoying Chicago/The Blues/Today! will realign your DNA, recharge your heart and soul, keep your legs shaking and your senses filled as you swing to its electric, bluesy brew.

We’d like to welcome Ken Micallef back to Part-Time Audiophile. Ken used to contribute the Vinyl Grouch column to PTA, and now he returns with a new take on music, called Jazz Files.

Many years ago, an audiophile buddy of mine said that the difference between an audiophile and a music lover is that the audiophile won’t truly appreciate mono recordings, especially those that are considered historically important […]