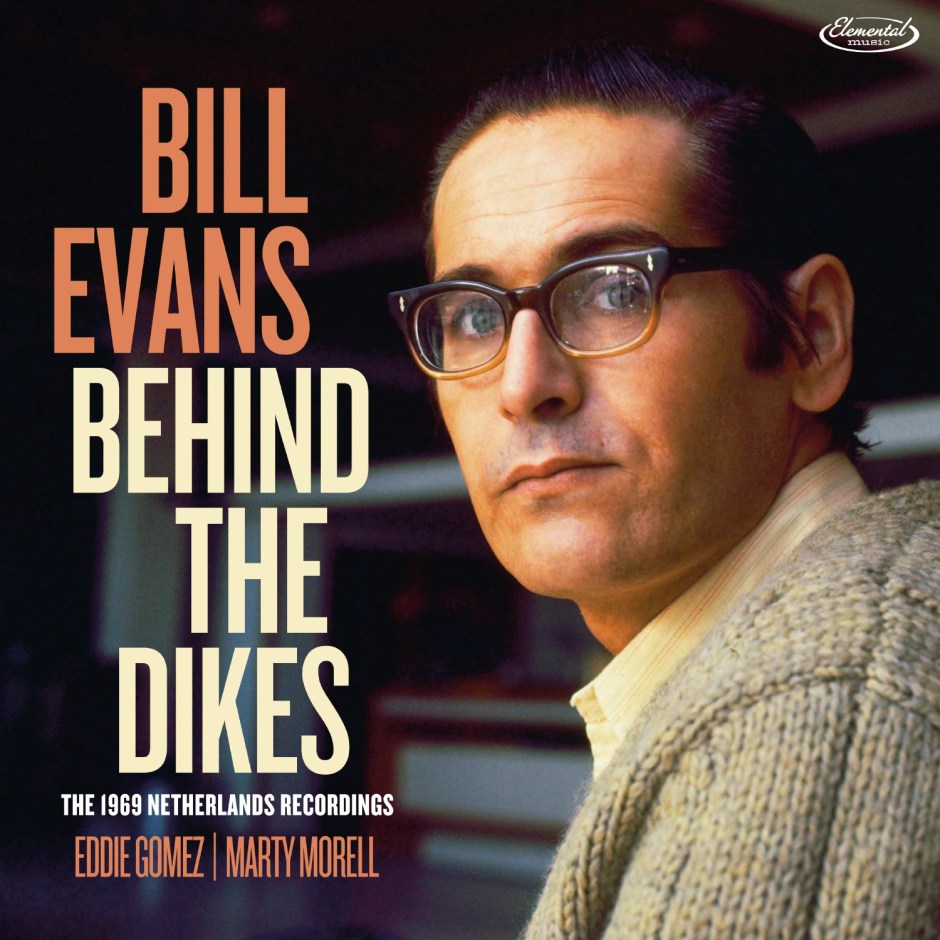 To paraphrase one of his album titles, why does everybody dig Bill Evans? Something special happened every time Bill Evans played the piano. Time stood still or seemed to suspend and disappear. When he flew into one of his memorable introductory flourishes, every lover you’ve lost, every heartache, and emotional scar you thought you’d forgotten suddenly rushed to your consciousness. Bill Evans was a shapeshifter, a poet, a spiritual musician of the highest order.

Words and Photos by Ken Micallef

Evans was also a master of bittersweet melodic splendor, lyricism, wistfulness, and of course, deep swing feeling. His technical gifts, which to him were as natural as breathing, his deeply introspective and lyrical melodies, his touch, and his ability resonate intently with listeners, marked him as perhaps the greatest jazz pianist ever. Evans’ technique didn’t match Art Tatum or Oscar Peterson, his personality was no match for Errol Garner, and he lacked the urban catharsis of Herbie Hancock or Andrew Hill. But fans line up for Bill Evans’ seemingly endless RSD releases for one reason: beauty. 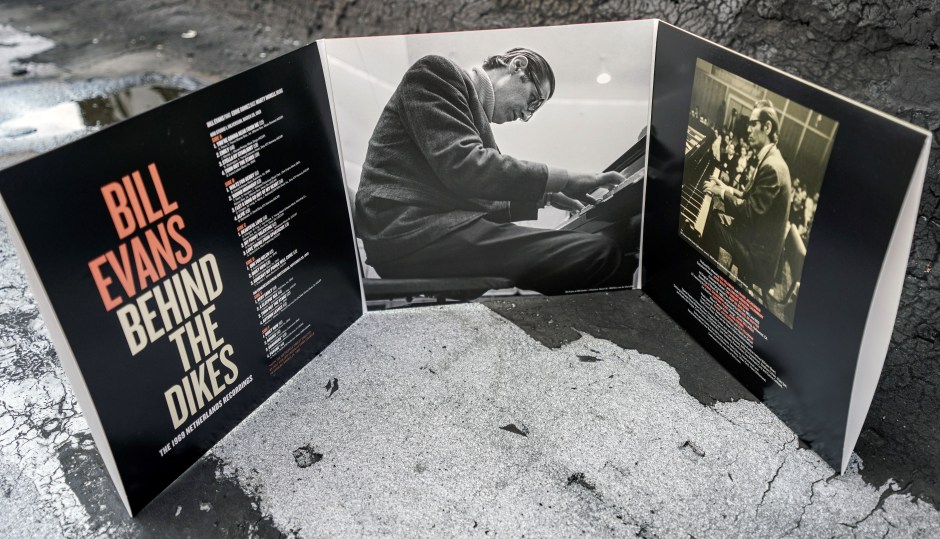 The latest of at least six RSD releases, including Evans in England, Some Other Time, Top of the Gate, Live at Ronnie Scotts, and Another Time, Behind the Dikes – The 1969 Netherlands Recordings, is a triple set LP limited to 3500 pressings, currently peaking at eBay for $169.99. (At my weekend gig at NYC’s Jazz Record Center, our ten copies sold out at $89.00 apiece). Vinyl mastered by Bernie Grundman, pressed at Canada’s Standard Vinyl.

“Behind the Dikes: The 1969 Netherlands Recordings is the first official release of pianist Bill Evans with Eddie Gomez and Marty Morell captured live in Hilversum and Amsterdam in 1969,” states the PR blurb.

“The Hilversum recordings feature Evans’ only version of Duke Ellington’s ‘I Let a Song Go Out of My
Heart’ known to exist, plus two rare tracks of the trio backed by the world’s leading pop and jazz
orchestra, the Metropole Orchestra.

“Remastered from the original tape reels housed at the Nederlands Jazz Archief, and in cooperation with
the Bill Evans Estate, this set includes a booklet with never-before-published photos; essays, and new
interviews with Eddie Gomez, Marty Morell and more.”

Fidelity is good if not great (but thankfully lacks the distortion which marred sections of Live At Ronnie Scott’s). Bill Evans occupies the left channel, Gomez too loud in the center, and Morrell well represented in the right channel. Around Side B, the track listing goes off, so what’s stated on the album’s backside doesn’t match the song order noted on each LP. My LPs were dead quiet. 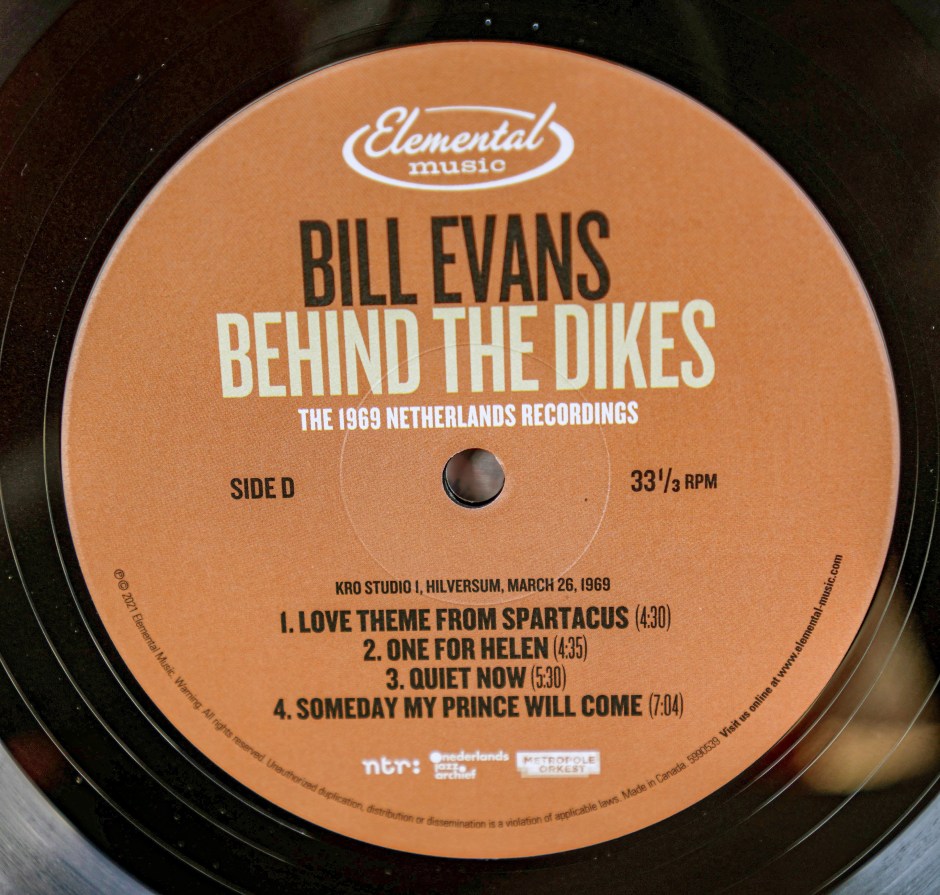 First thoughts: Evans doesn’t play enough, Gomez overplays and plays too much, and the grandly swinging Morrell gets only one set of “trading 4s” and not a single solo over three LPs. Each song opens with a glimpse of Bill Evans erupting in beautiful cascades of piano before settling into the tune, followed by an all too brief Evans’ solo, then the hustling Gomez charging forward to emit a flurry of solo notes, the dutiful Morrell laying behind, providing immaculate, swinging accompaniment throughout. But when we’re allowed to bathe in the brief sunlight of Evans’ genius, the records’ fidelity, the bassist’s endless bluster, it doesn’t matter. Evans’ sense of beauty, lyricism, swing, and flow are so all-encompassing, we’re like beggars outside the castle walls, waiting for a sliver, and the brief happiness it brings.

Culled from performances at KRO Studio I, Hilversum, March 26, 1969, and RAI Congrescentrum Amsterdam, November 29, 1969, highlights include an energetic, sparkling “Emily,” an uptempo “Stella by Starlight” with a blazing Evans’ solo, an open and very swinging “Waltz for Debby,” stately versions of “Alfie” and “My Funny Valentine,” Evans’ beautiful recitation of “Love Theme from Spartacus,” and a lightly pulsing “Someday My Prince Will Come.”

Bill Evans had a gift for turning sentimental melodies into deep wells of sorrow, beauty, and memory, a regular occurrence on this release. And this trio swings hard.

“Granadas” and “Pavane,” by Granados and Faure, respectively, performed with The Metropole Orkest (Vara Studio B, Hilversum, March 25,1969), are an absolute delight. Recalling the strings of Frank Sinatra’s September of My Years, but with a far lighter touch, the Orkest encircles the trio (Evans now placed dead center in the soundspace) like gentle sirens, Evans weaving a spell throughout. Should you buy Behind the Dikes? If you have any of the previous RSD Evans’ releases, how can you not? It’s yet another layer in the mystery and beauty that is Bill Evans. – Ken Micallef 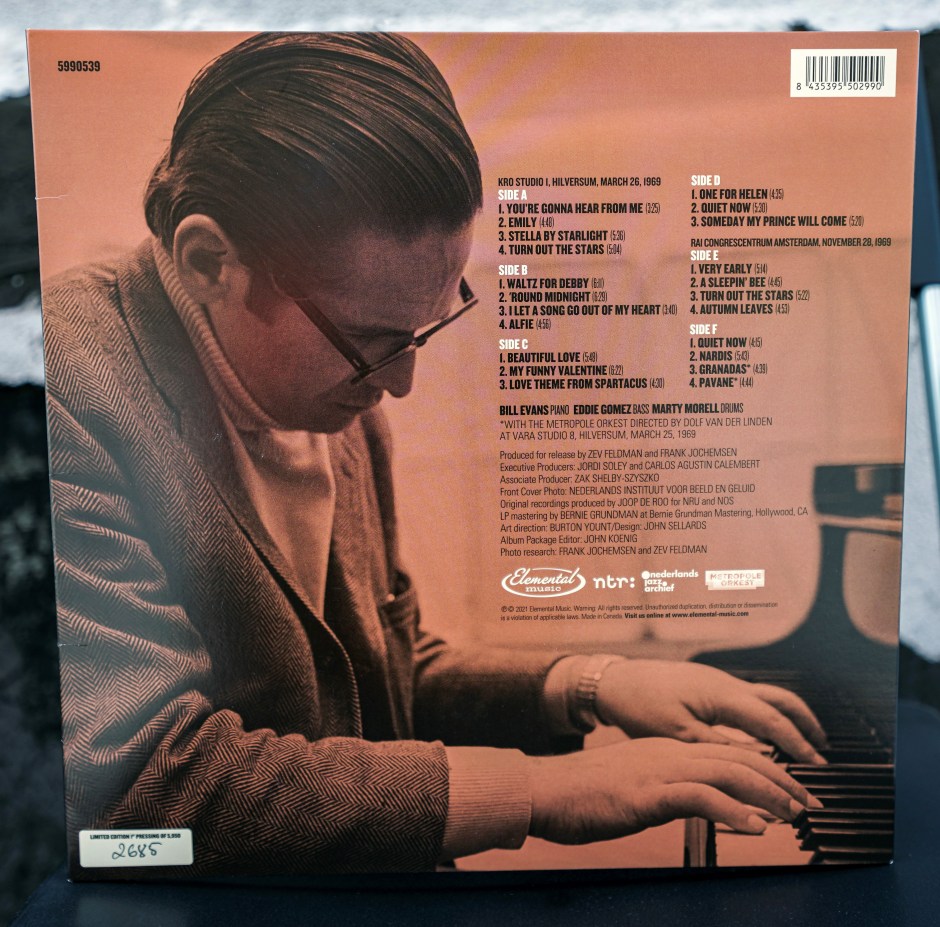 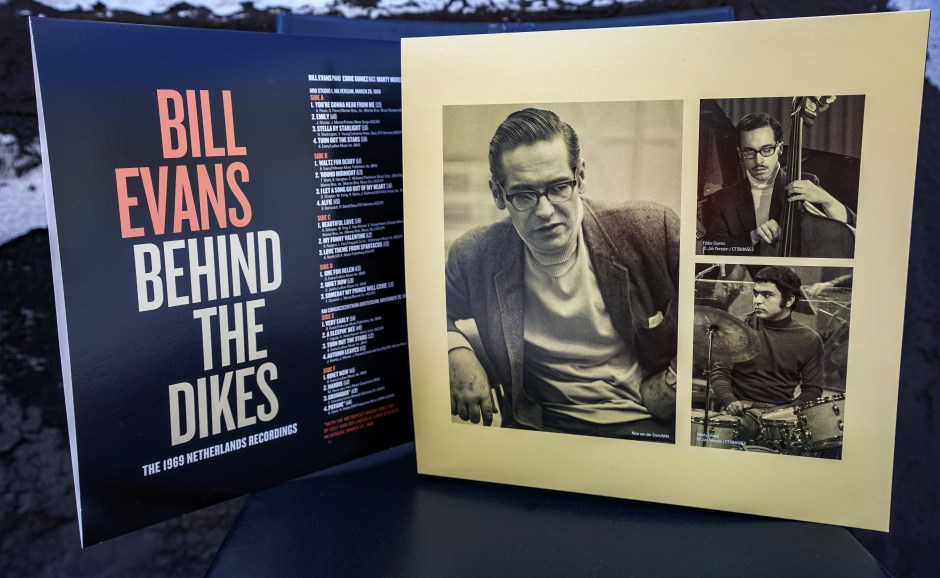 I shouldn’t have to convince jazz lovers that four CDs’ worth of previously unavailable live Bill Evans on Resonance Records is something special they want to own, but these two new releases are quite special–not […]