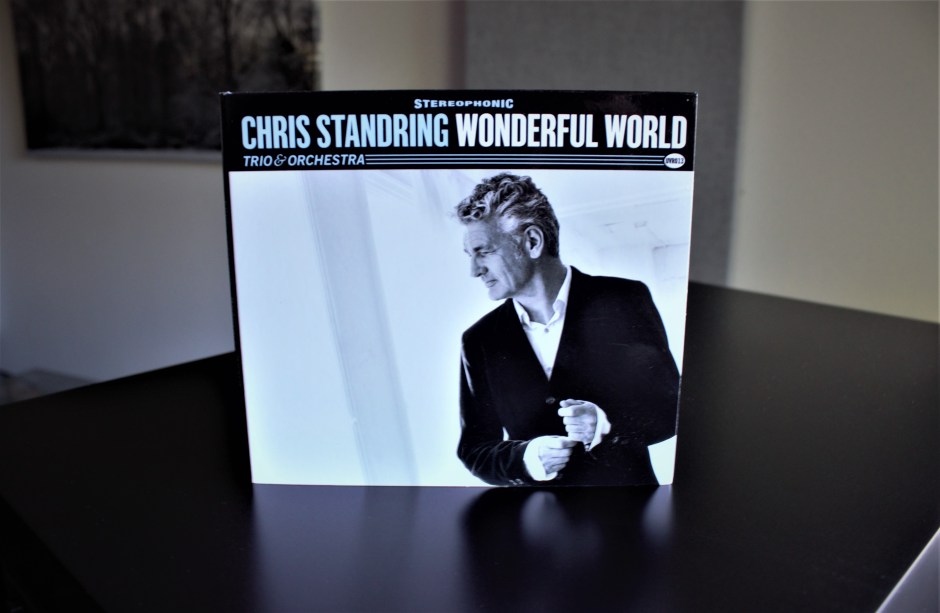 UK guitarist Chris Standring and his new album Wonderful World have helped me to confront my secret, unspoken love for a certain kind of music, a nebulous genre known by various names such as exotica, tiki or lounge. I get goose bumps whenever this type of music appears in movies, such as Henry Mancini’s “Lujan” in Sexy Beast or Carolyn Burnham playing “Bali Hai” during dinner in American Beauty. It’s that South Pacific-inspired juxtaposition of jazzier themes against a lush orchestra, where you can smell the salt and hear the waves in the distance and feel the breeze against your face. It’s the early ’60s, even though Martin Denny got the ball rolling a few years before. Let’s say 1964. I was a toddler then, but I still feel something familiar and comforting in the music. That’s what the world sounded like back then, doused with a bit more glamour.

Chris Standring is known primarily for his work as a jazz guitarist and for his compositions and arrangements, but Wonderful World is a new direction for him. He takes that idea of a jazz trio, with a rotating cast for a rhythm section, and sets it up against a superb orchestra led by Geoff Gascoyne and recorded at Abbey Road. He doesn’t necessarily stick with that exotica feel, although bonds remain to Latin jazz through the compelling choices in percussion. Cha-cha-cha.

While the focus often remains on Chris Standring and his swinging yet heartfelt approach to both acoustic and electric guitars, the giddy flourishes in the orchestra are what create those lovely and relaxed portraits of beaches where the sand is black and the coconuts are falling from the trees. We’re talking about harps and flugelhorns swimming effortlessly through the sound of massed strings, adding to the liveliness. You will be swept away by this music. It’s designed to do so.

In lesser hands, this album might be more about kitsch, about celebrating a time that seems much more innocent than now. But Chris Standring know better. He plays it straight and takes these standards–“Night & Day,” “What a Wonderful World” and “Green Dolphin Street”–very seriously. Maybe he knows that there are people like me out there who still wouldn’t mind decompressing after a long day to music like this. I remember my dad coming home from work and turning on the radio and listening to “beautiful music” stations with call letters like KOST and KBIG and while I thought it was dorky at the time, I find myself needing this music now. Honestly, I think a lot of people do.

When I first moved to Texas back in 2009, I was more than a little concerned about the music situation there. I know, I lived outside of Austin and shouldn’t have worried one bit–but this […]

Linda Purl, Taking a Chance on Love | The Vinyl Anachronist

Just a few weeks ago I had to come clean about a former Hollywood crush, Gloria Reuben, when she released her surprisingly beautiful album For All We Know. Now I’m going much further into my […]

I’ve been talking and thinking about this darned Børresen M1 loudspeaker so much the last few weeks, it didn’t even occur to me that they hadn’t been officially announced until now. If you haven’t been […]