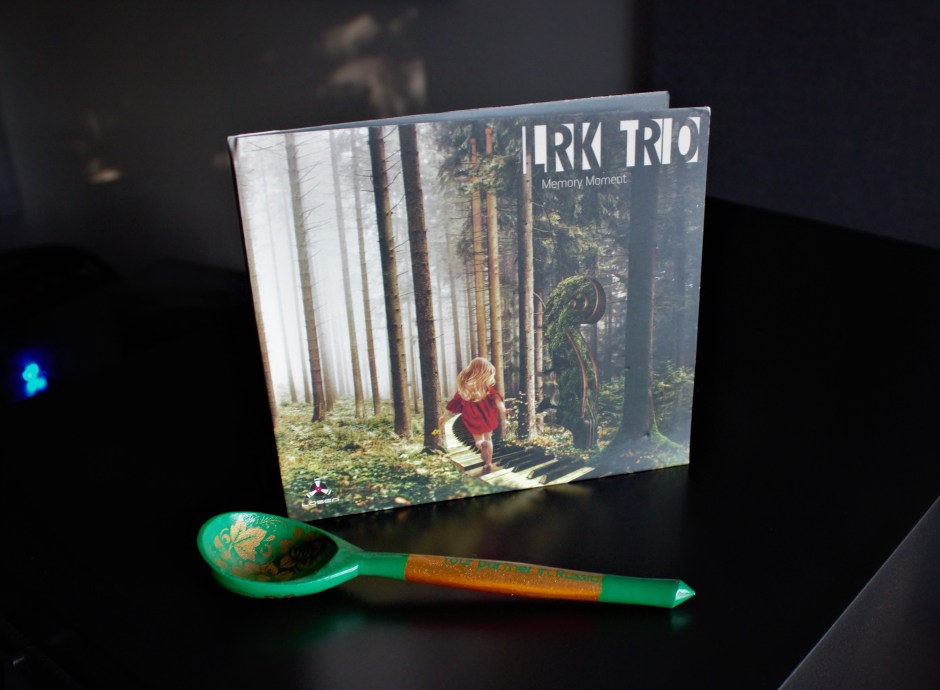 I’ve mentioned the influx of European jazz that’s suddenly arriving in the mail, especially from Switzerland, but here’s a CD from Russia that made quite a surreptitious entrance. I saw the little customs labels all over the mailer, and I also felt a strangely shaped object sliding against the jewel case. It turned out to be a little wooden spoon, painted green, and it said “your partner in Russia.” It felt ominous at first, as if I’d instantly forged a permanent bond with a perfect stranger from halfway around the word, a bond that could now never be broken, but then I read the handwritten note from the members of LRK Trio that asked me if I could take a listen to their new album, Memory Moment.

That was an odd introduction to a jazz trio album that, in the subsequent weeks, became a favorite in the rotation, a dynamic and lyrical jazz that is, again, a little bit different from the more traditional American subgenres. LRK Trio consists of keyboardist Evgeny Lebedev, bassist Anton Revnyuk and percussionist Ignat Kravtsov, and they’ve built their reputation on several intriguing album that focus on the natural acoustic interactions between the three performers, perhaps more so than you’ll find with the average piano trio.

Memory Moment, from the first few notes, lets you know this is jazz that sounds very different because possibly familiar ideas are being viewed from a completely different angle. I’m not talking geography, though–let’s give credit to the imaginations of the LRK Trio. At their core, these original compositions are pure jazz, Lebedev’s dazzling piano runs leading the way. But each musician here steps away from jazz conventions in his own unique way, with synthesizers and programming and even a metallophone.

This is done without gimmickry, by the way, and moves this music toward a tighter and more universal sound, one that borrows from unlikely sources such as prog rock. At several points along the way, I felt the LRK Trio sounded like a jazz piano trio version of Pink Floyd, especially in the moments where Lebedev switches to a Hammond B-3. We’re talking simple yet unexpected chord progressions that are touching and thoughtful and, surprisingly enough, danceable at times.

LRK Trio, from their recording studio in Moscow, have created the kind of album that says “this is what’s happening right now. This is jazz in 2021.” That makes me happy. Highly recommended.

Jeff Williams and his new album Bloom makes me rethink all of those reviews where I discuss the idea of the drummer-as-leader in jazz, and how that individual coaxes performances from the others on stage […]