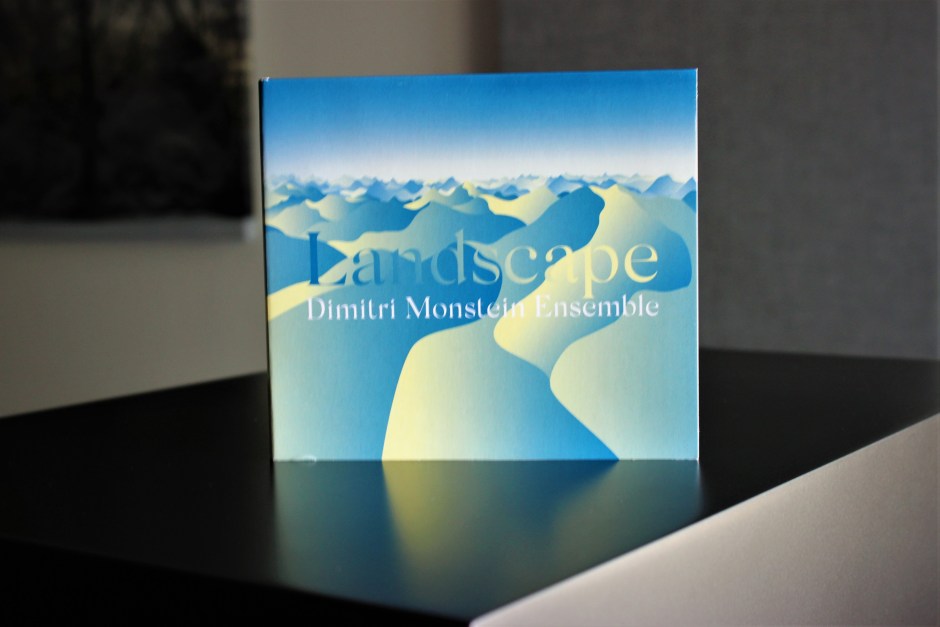 I can’t pick out a specific genre for the music played on Dimitri Monstein Ensemble’s Landscape, and yet it’s so familiar, like something I used to hear all over the place many years ago. Monstein, a Swiss drummer making his debut as a leader and a producer, calls it a straight mixture of jazz and classical. That sort of implies the idea of a jazz orchestra, which is far from a rare breed on the contemporary scene. But this music is different from that music, and I can only describe it as the kind of small orchestra music employed for films and TV many decades ago. You know, jazzy when it needs to be, rock and pop when it dares, but perhaps rooted in traditional forms of jazz.

The Dimitri Monstein Ensemble’s Landscape is yet another of these fantastic Swiss jazz albums I’ve been receiving in the mail. I want to say that they’re arriving out of the blue, but now I recall getting an e-mail from someone, either a publicist in Switzerland or a record company PR exec, and I blithely stated sure, send me what you have. What I’ve been getting, on a very consistent basis, are stunning contemporary jazz albums, stunning in sound quality and stunning in originality. Each of these artists include a handwritten thank you note with their CD or LP–more than one has included a phone number (interviews?) and they’re all incredibly charming.

Then I listen and I think wow, these nice musicians in Switzerland are composing, arranging and playing some wildly imaginative takes of American jazz, sometimes completely turning their back on the things Americans hold dear (like electronic sampling and exotic instrumentation). Dimitri Monstein hasn’t gone around those jazz tropes, but he has taken a deep plunge right to the middle, the idea of original scores and how they can tell stories even when there is no dialogue or action on screen. That’s why I feel like I know this music, but not in this way.

Plus, we have that unique drummer-as-leader dynamic in this ensemble, and Dimitri Monstein is a jazz monster. His solos here are full of energy, and he never runs out of ideas. Drummer-leaders often lay low to push the others along, but there are plenty of times when Monstein lets loose and levels the club.

Dimitri Monstein couldn’t achieve this flexibility without a varied orchestra, so this ensemble combines a piano trio (with two rotating pianists) and a string quartet. The moods arise out of the counterpoint of these two forces, and these themes flow and create visuals from movies you wish they’d make. Landscape can sound deceptively familiar, but there’s always another layer to uncover, one that suggests this type of music might actually lead somewhere we haven’t been before.

“All the world’s a stage.” The blending of jazz and William Shakespeare’s prose seems both logical and a little daft, especially when you think of all those cool jazz tropes that are based on a […]

John Daversa Jazz Orchestra, All Without Words | The Vinyl Anachronist

The John Daversa Jazz Orchestra (website) is certainly on a roll. Last year there was a Grammy amid a string of beautiful recordings with socially-conscious themes such as DACA Dreamers, and quarantining with your family […]

I toyed with the idea of resting and relaxing until after the first of the year, but then there’s this, Ronny Whyte‘s latest album, and it’s the perfect New Year’s Eve album. Ronny Whyte is […]