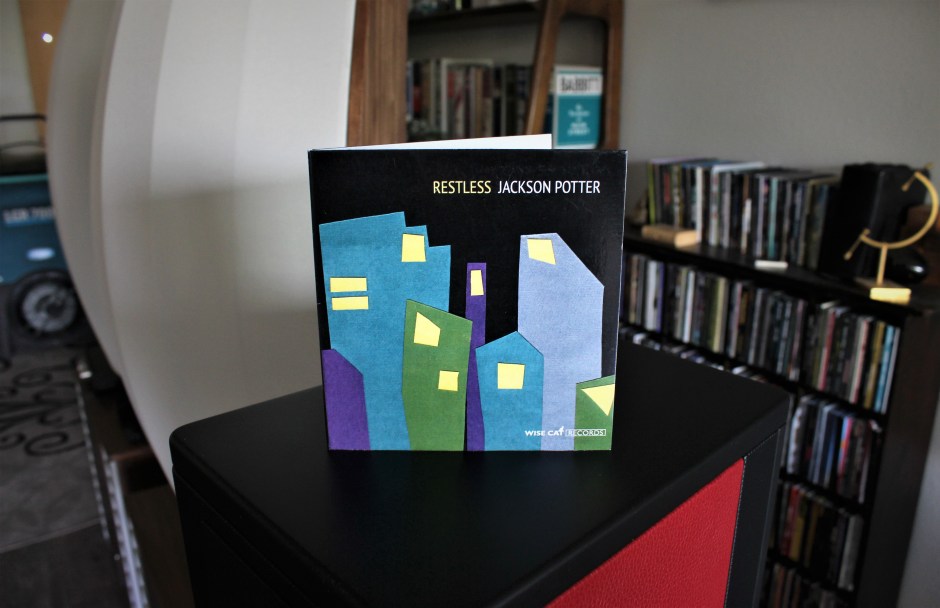 Jazz guitarist Jackson Potter certainly has that young Chet Baker, who’s-the-kid vibe, and his debut album Restless is certainly is one of those calling cards where the performer gets a chance to play a little everything to show off that talent to the world. Subsequent albums zero in, go off on tangents and define where these performers are in respect to their lives and goals. This album is the former, the survey of all the forms, but Potter is simply amazing in terms of checking all the boxes so early in his career.

First of all, these are mostly original compositions from Jackson Potter and they immediately capture an assigned essence of sorts, a feeling of “this is how it’s supposed to be and I know this because I’ve been around forever.” He obviously can’t be that omniscient, but it’s scary how right his guitar is. He knows when to take chances, even adding a little fuzz here and there, but he also knows when to sit back as opposed to sitting out while the others on stage are in the midst of a solo. No, he’s still there, quietly adding shades of sound, never stepping forward but always being heard. That’s a mature approach to leading a jazz ensemble.

Here’s another wise move from Jackson Potter–he knew to surround himself with a stellar outfit, billed as “Miami’s finest players”–drummer Gibb Mandish, bassist Patrick Leavy and pianist Leo Folsom comprising the core, and an assortment of guest performers in the horn section. This is more than everyone getting a fair share of the spotlight, this is a baton of creativity that gets passed around constantly. Pick a random moment in Restless, and you will hear someone in the middle of a shining moment.

Best of all, Jackson Potter has provided an album of real jazz as his calling card, and it has the same inventive drive as anything from the so-called golden years of jazz. Perhaps this is the real strength of youth, of still surrendering to your instincts because they are usually right, at least until everyone comes in to tell you how to be better. Keep an eye on this young man–he’s an old soul with the energy of a young man, and the result is superb.

Florian Arbenz and Greg Osby, Reflection of the Eternal Line | The Vinyl Anachronist

I’ve mentioned that I love getting review requests directly from performers, usually because I see the passion in their appeal. It’s direct and unfiltered. This isn’t a swipe at record label PR or publicists–those people […]

The Grun Earthing System from Atlas Cables is the third product I’ve reviewed in the last year that addresses grounding in your high-end audio system. The first two products, of course, were the Nordost QKORE […]

In the Luxman and Magico room at AXPONA 2022, I drooled a lot. Luxman’s story over the last few years has been a treat for audiophiles all over the world–a legendary Japanese hi-fi marque re-invents […]