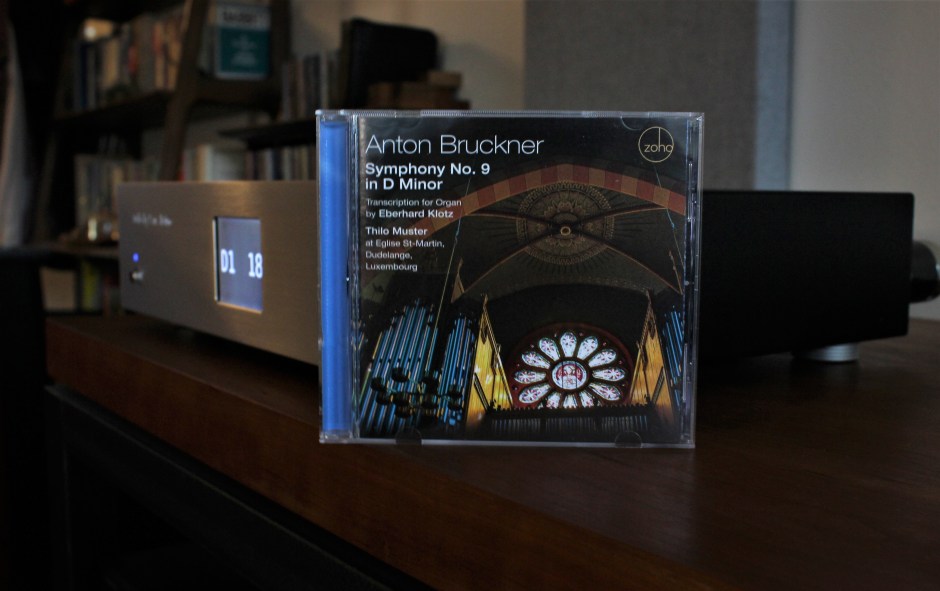 This new recording of Symphony No. 9 in D Minor from Anton Bruckner is interesting to me on several levels. First of all, it comes from the Zoho Music label, which I associate with jazz–South American jazz in particular. Okay, Zoho is expanding their vision, which is okay with me. I’ve covered Zoho recordings for years and I find they’re thematically rich, like 2L Recordings, and the recordings sound really nice. Not 2L nice, which is a mountain that few can climb. I’m talking dynamic and natural recordings that I find fascinating.

Need another intriguing level of this Anton Bruckner performance? This is Eberhard Klotz’s transcription for the pipe organ, which I haven’t heard until now. (Zoho specializes in bringing listeners to places they’ve never been before.) Performed by Thilo Muster at Eglise St. Martin in Luxembourg, this is a guttural and turbulent performance that creates a tremendous amount of energy in the low frequencies–I mean, why else play this piece on pipe organ? Muster, however, goes beyond the usual bombast by creating subtle momentums in the music, and conveying so much expression in those deepest notes.

Here’s what I found most satisfying. I know Anton Bruckner, and I know this piece, but I’ve only heard it performed by a symphony orchestra. What happens on this recording goes a step beyond the usual issues with transcriptions, because the arrangement is tied so closely to the musical instrument(s) themselves. That creates a brilliant sonic weave in the music where you fall in and out of the old familiar Bruckner and discover a new side to the man.

Much of the credit goes to Klotz, a German organist who knew the primary reason for such a transcription would require a somewhat radical approach. “It’s not intended as a ‘substitute’ for the orchestral version, but rather as a ‘new’ organ symphony especially written for the organ and its tonal possibilities,” it explains in the liner notes. That makes perfect sense. This is the premiere recording of this version, which is a typically momentous occasion for Zoho, and Anton Bruckner fans should immediately check it out and compare this Symphony No. 9 to others. It’s time well spent.

Last May, when I attended High End 2022 in Munich, I walked into the Göbel High End room and was so knocked out by the system that I awarded this German company Best of Show. […]

For a long time I’ve admired the sound of jazz duos that consist of just an acoustic and a electric guitar player. The overall sound is smooth and relaxing, but there’s always a manner in […]