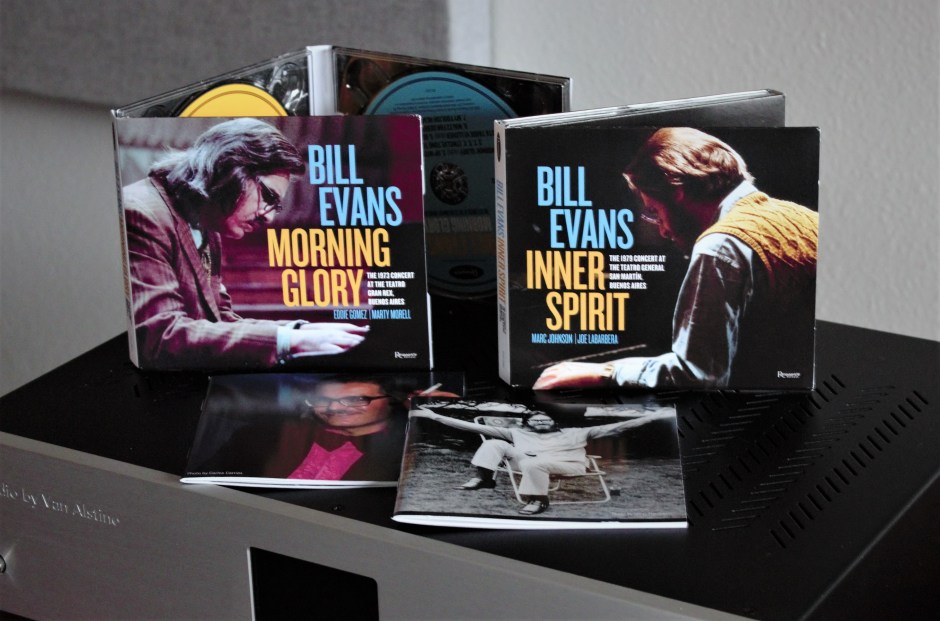 I shouldn’t have to convince jazz lovers that four CDs’ worth of previously unavailable live Bill Evans on Resonance Records is something special they want to own, but these two new releases are quite special–not just another excuse to gussy up some lost tapes that probably haven’t seen the light of day for a very good reason. Morning Glory captures Bill Evans and his 1973 performance at the Teatro Gran Rex in Buenos Aires, and Inner Spirit was recorded in 1979 at the exact same venue.

These recordings of Bill Evans on Resonance have become somewhat legendary, at least in Argentina. The older recording was captured in an unstable time in Argentina’s history, when Juan Peron returned from his exile in Europe and there was “violence in the streets.” Morning Glory featured Bill Evans and his most enduring rhythm section, bassist Eddie Gomez and drummer Marty Morell. By the time Inner Spirit was recorded, six years later with bassist Marc Johnson and drummer Joe LaBarbera, Argentina had plunged into deeper turmoil–the Dirty War and its death squads were unleashed, focused on followers of Peron.

Despite all that turmoil, these were exciting performances for Bill Evans. The audiences were ecstatic and grateful to Evans for performing in their country at a time of “shadows, fear and unease.” These two recordings were mic’d close to Evans, so much so that you could be sitting in his lap–it’s all right there, up close and personal. (I knew, in advance, that Bill Evans on Resonance would leave much of the historical artifacts intact.) As a result, the audience sounds very small and distant, almost canned in comparison to some of Bill Evans’ other live albums. But that was a compromise that needed to be made, for one reason or another.

Despite that curious shift in perspective, this is all such classic Bill Evans and worthwhile on every level. Resonance usually does an excellent job with these reissue/lost tapes kind of albums, and I’ve reviewed several. But this one is particularly worthwhile because it’s from one of my favorite jazz pianists of all times, so beloved to me that I find it difficult to talk about contemporary jazz pianists without invoking Evans’ name. It’s all here, four hours of Bill Evans on Resonance, and it’s as satisfying as it sounds.

Morning Glory and Inner Spirit won’t be out until April, so you might want to write a note for yourself. Bill Evans on Resonance Records is very good news indeed.

Massimo Biolcati and his new CD Incontre is my first review for 2020, and over the holidays I had at least a couple of light-hearted conversations about which jazz genre would take over from Tangorama […]

For some of the Part-Time Audiophile staff, including yours truly, AXPONA 2022 in Chicago will be the first high-end audio show we’ve attended for over two years. We’ve had a couple of shows recently, including […]

Nat King Cole will always be special to me because his music reminds me of my parents, who are still doing well in Colorado at age 86 and 88. He was among the first “common […]