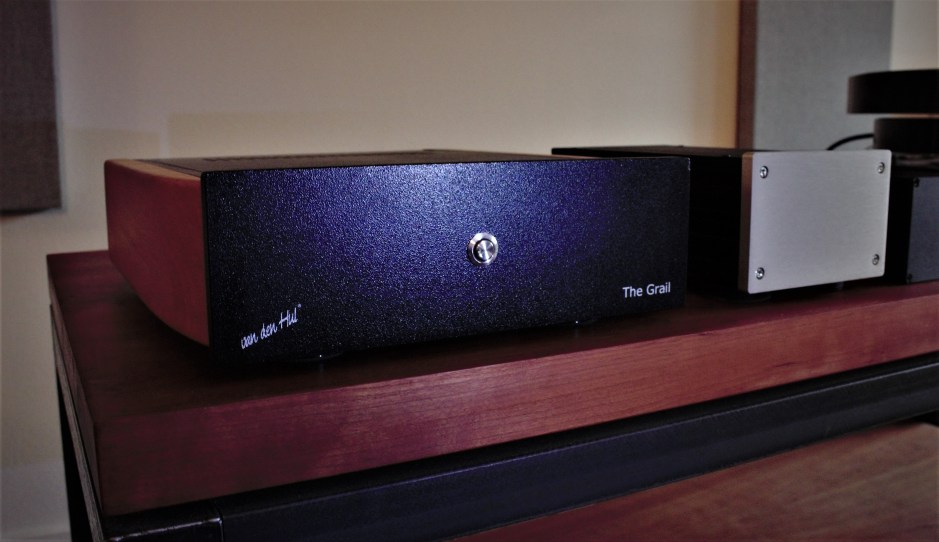 Van den Hul? I finally get to review some Van den Hul? Honestly, I’m not entirely sure I’ve even heard a Van den Hul product before. Maybe at a high-end audio show or in a showroom, but I can’t remember sitting down to listen to a system and thinking yeah, Van den Hul! Finally!

I am an audio geek, it’s true. But that’s one of the many awesome things about my job—sometimes I get paid to fill in the gaps in my audio-life experiences. Eric Franklin Shook met with Van den Hul’s US distributor, John McGurk from AudioShield, and then asked me if I wanted to review anything from the legendary A. J. Van den Hul. I replied, “Yeah, all the cartridges!” I have a few friends in the industry who think the world of Van den Hul’s world-class phono cartridges, and I know one highly respected individual who is on his second Grasshopper.

The Grail, even in its most basic guise, is still a beast designed for performance. The timing of its arrival was fortuitous—I had just spent months with the Brinkmann Taurus turntable and Brinkmann Edison Mk. II and I had become a bit spoiled, as you might imagine. Still, I was able to use the Edison with other turntables, most notably with the Technics SL-1200G and SL-1210GAE, and I felt it was necessary to hear the Taurus with something other than the Edison. The Grail certainly fit the bill.

Please don’t expect me to compare the Van den Hul with the Edison, or the Pass Labs XP-27, or any other phono stage I’ve had in here that costs five figures. At this point, it’s going to be a matter of personal preferences, and I’m malleable enough and can be persuaded to fall in love with a new sound as long as I connect with it on some level. I made peace with the fact that the Edison and the XP-27 didn’t quite sound alike, but I could easily live with either sound for a long time. One True Sound is for the birds, as I’ve mentioned once or twice in the past. 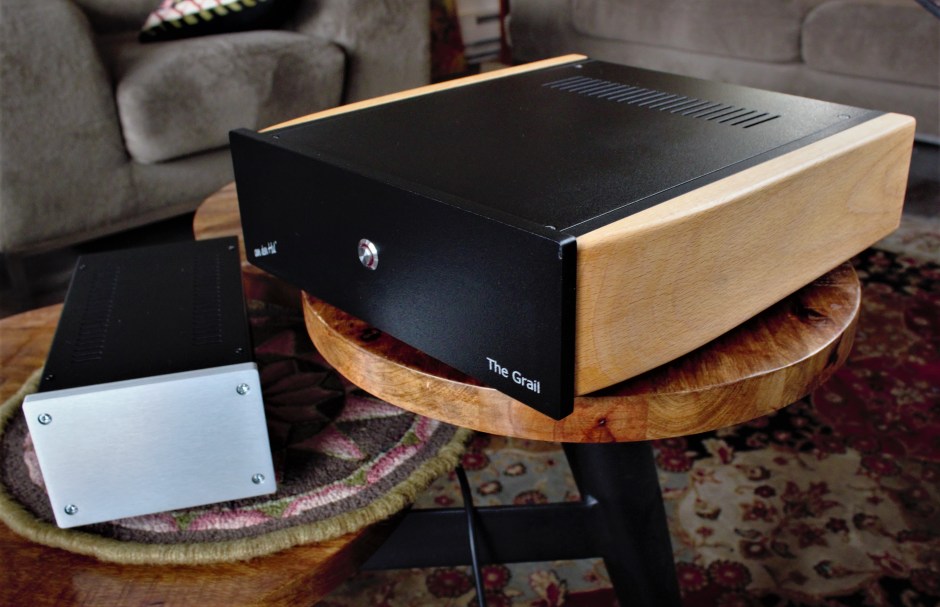 Inside the Van den Hul The Grail

The Grail, from Van den Hul, looks serious the second you remove its case from the packing box. Yes, I said case. When you get to this level of high-end audio, you should expect more than cardboard and styrofoam. The Grail comes in a strong protective case, similar to AVM’s flight cases, with the dense foam cut out precisely for all of the individual parts (which includes a beefy, well-made outboard power supply).

The Grail is relatively compact but still heavy—heavier than you expect for a phono stage. The solid wood side pieces on The Grail are an unexpectedly beautiful touch to the clean metal surfaces—they’re rounded enough to give this box a curvy and somewhat sexy appearance.

Inside, The Grail from Van den Hul is one of those remarkable designs where you know every cubic millimeter was carefully considered and tested. Van den Hul has paid attention, like many other high-end manufacturers, to the importance of acoustic isolation of the PC boards. But the company has gone further by designing the seating which helps to control microphonics, and gold conductive paths have been integrated into the PCB material.

Other Van den Hul features include RIAA equalization that uses coils instead of caps, an automatic adapting input MC stage that eliminates the need for matching resistors in the signal path, and a shielded transformer that is isolated in a second, smaller box and connected with an umbilical. For many users, that automatic adapting input will be the most amazing feature—a phono preamplifier that automatically adapts impedance loading to the cartridge. This is known as a current mode input, which results in a more direct signal path. It’s the coolest new tech I’ve seen in phono stages since the first time I first loaded impedance via remote control more than a dozen years ago.

The Grail has two MC inputs. To add more flexibility, van den Hul offers users the chance to adjust the sensitivity level of individual cartridges. Much of The Grail’s technical approach is focused on the reduction of noise, as it should be. If I’ve learned anything about analog rigs over the last year, it’s that quiet is everything. 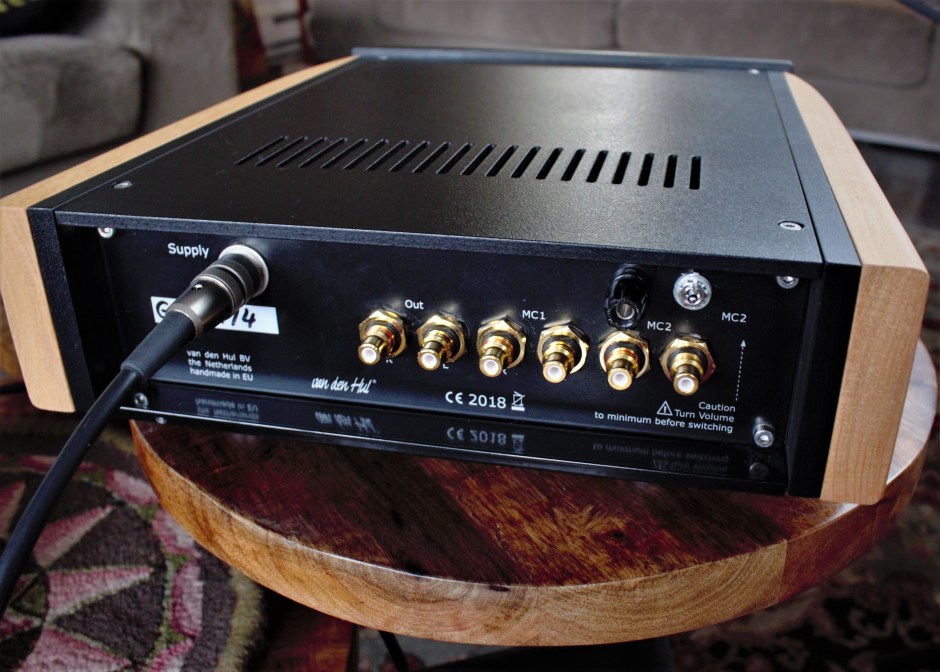 As I’ve mentioned, I used The Grail from Van den Hul exclusively with the Brinkmann Taurus, along with the Brinkmann 12.1 tonearm. Tonearm cable was Atlas Cables Mavros. I used two cartridges with The Grail—the ZYX Ultimate Airy X, and the Koetsu Black Urushi. I usually refer both cartridges loaded at around 100 ohms, but thanks to that automatic impedance matching I didn’t have to worry about a thing.

Gain settings with the MC input are 56, 64 and 72 dB, and I went with 64 dB most of the way, generally depending upon the preamp used. That ranged from my Pureaudio Control preamp, which sometimes needs a little extra juice, and integrated amps such as the AVM Ovation CS 6.3 all-in-one and the Naim SuperNAIT 3. Quite honestly, I was most impressed with the ease of The Grail installation—while you can certainly futz if you wanna, I had this tremendous sense of having everything sound great on the very first try. 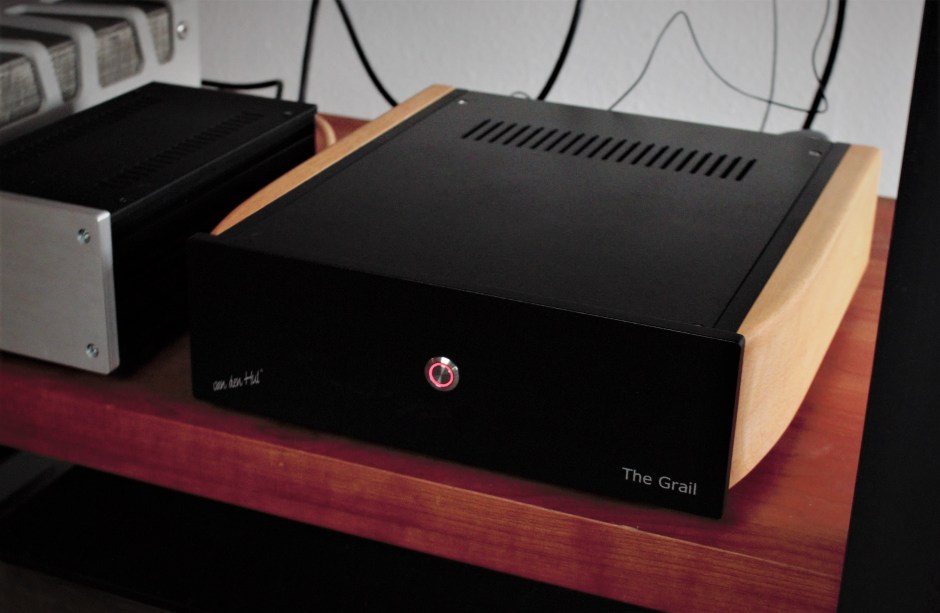 Once broken in, The Grail had an exciting and energetic swagger, one that could reveal an incredible amount of detail while never coming close to sounding bright or edgy. The other phono stages I’ve reviewed in its class have that supreme sense of quiet, those bottomless depths of blackness between the notes, but the Van den Hul created a better sense of the electricity in the air—the figurative kind, of course, the kind you feel when you’re watching a live performance that’s busting from its seams.

It’s still superbly quiet, of course, but I often felt anticipation while listening to my favorite reference LPs, especially if I knew something big was about to happen like a sudden crescendo or a complex drum fill delivered with a crisp certainty. I’d get chills knowing that something cool was coming down the pike, and then I’d get another round of chills because it would be even better than I suspected.

After a while, I recognized this overall sound as a sort of clean delivery of dynamic contrasts, a wow factor that doesn’t happen as often as it used to since I tend not to crank the volume these days. But if you have something that specializes in both macro-dynamics and micro-dynamics at the same time, you don’t need to crank the volume.

My usual test of sheer dynamics is usually that Athena LP pressing I have of Rachmaninoff’s Symphonic Dances from Donald Johanos and the Dallas Symphony. It’s an overused audiophile reference to be sure, but I love it because it’s a fairly small orchestra that’s quite forward so when they hit those loud passages it knocks your head back into your Eames. It’s a fun roller coaster of an album, but the Van den Hul actually had my heart racing in a couple of spots. This is, again, an album I’ve listened to a zillion times. I’ll remember this occasion from now on.

Of course I had to implement the Yulunga Test with an analog components that’s this exuberant. I’m referring, of course, to that single first strike of a huge bass drum on the opening track of Dead Can Dance’s Into the Labyrinth, which should be both soft and yet relentlessly deep and full of layered textures. With speakers such as the Nola Champ3, which reach far down into the low frequencies, lower than I thought possible in my listening space, The Grail had its place in the sun and wound up pulling out extra details that weren’t exactly new to me—but I felt I understood their relationship with the rest of the music with more clarity than ever before. 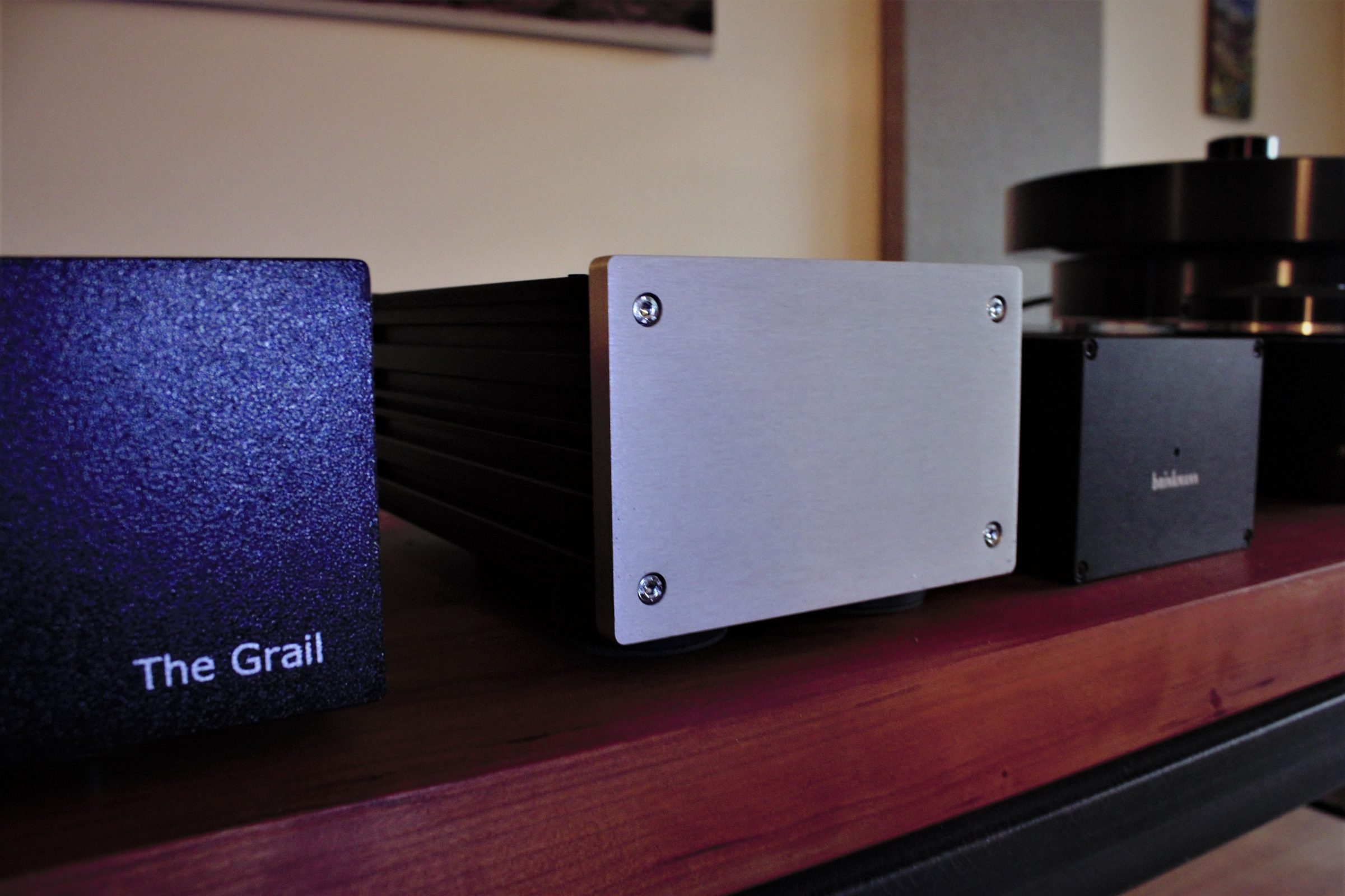 I’m bringing this up because I used two extraordinary Japanese cartridges with the Van den Hul, the ZYX and the Koetsu, with this Dutch phono stage, and I felt that The Grail pushed the two cartridges slight toward the European way of looking at things. The one exception, unsurprisingly, was the Koetsu which sounded basically the same as it did with the Brinkmann Edison Mk. II just a couple of months ago.

This suggests, of course, that The Grail with a Van den Hul cartridge might be the most successful way to achieve what A. J. van den Hul envisioned, but at the same time I enjoyed the superb and slightly unique combination of the two approaches. I had plenty of moments with the Van den Hul that were truly special and will stay with me for a long time. 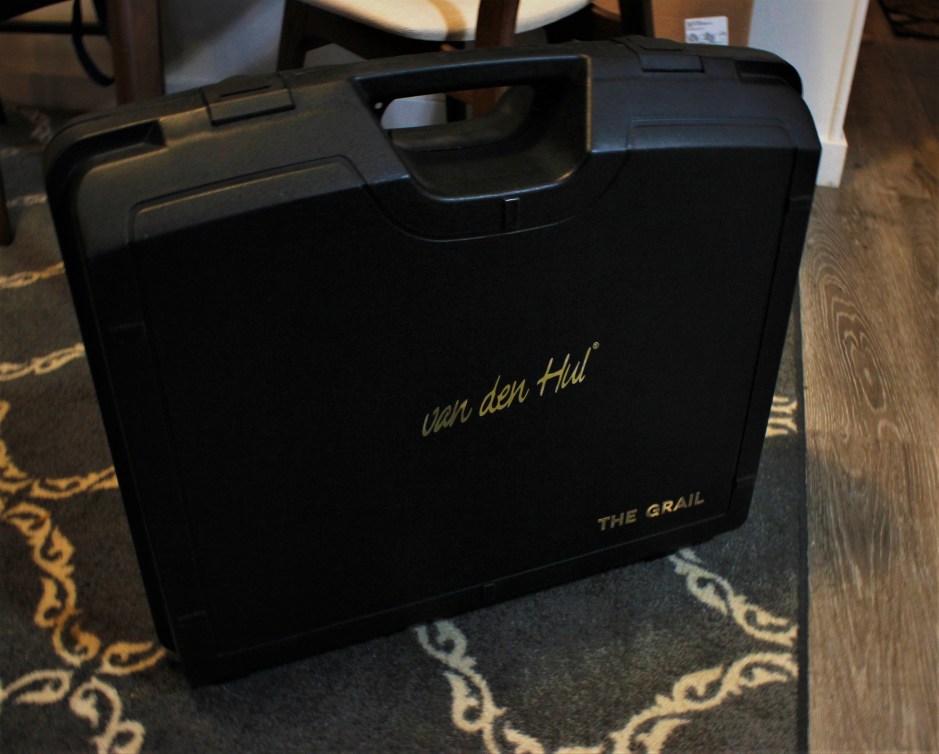 I know what you’re thinking when I describe a sound as having extra energy or clarity. Maybe it’s a polite euphemism that I use when I really want to it was a bit too bright or analytical for my tastes, which skew toward the mildly warm and admittedly colored. But that’s not what I’m saying, because the Van den Hul also sounded completely natural and real, qualities I’ve generally ascribed to vinyl and tubes and Class A and whatever else you got. It’s a new direction I’m exploring, first sprung on me while reviewing the Audio by Van Alstine DVA digital preamplifier. I’m hearing an enormous jump in clarity, one that reveals all the detail without sensory overload since it all makes so much sense. I felt this way about The Grail as well, that that extra bit of energy at the top made the music seem more vivid and memorable.

Also, you have to take into account that I used two high-quality MC phono cartridges that are known more for their musicality than their ability to extract every bit of information possible. The ZYX Airy Ultimate Z possesses a rare balance of everything I need from a cartridge and it never lets me down, and the Koetsu Urushi Black might be the finest cartridge I’ve ever had in my home. (The Urushi is twice as expensive as the ZYX on its own.)

Would The Grail from Van den Hul slip to the bright side with more linear cartridges from the likes of Lyra, Clearaudio or Benz-Micro? That I don’t know. In addition, I’d know more if I had the chance to hear The Grail with Van den Hul cartridges—hint, hint—I’d discover the same synergy as with the Urushi Black, which just made more sense overall. In addition, The Grail might add a touch more immediacy to big, open and relaxed cartridges such as the Sumiko Celebration 40 or the Hana Umami Red.

The Grail from Van den Hul is such a luxurious product to own and use, it’s surprising that it’s only the “basic model.” As you move up through the line, you get extra power supplies and inputs and additional mechanical isolation within and by the time you get to the top-of-the-line SE+, you’re looking at about $23,995. The Grail, however, is just $8,995, which makes it an incredible value for the serious vinyl lover. Highly recommended. 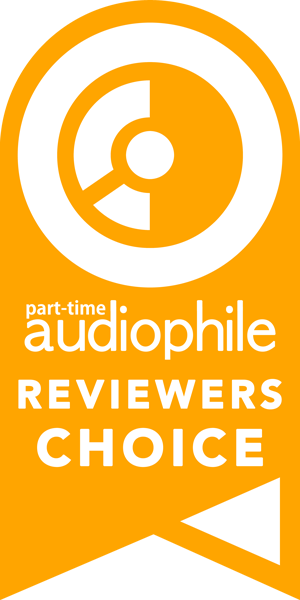 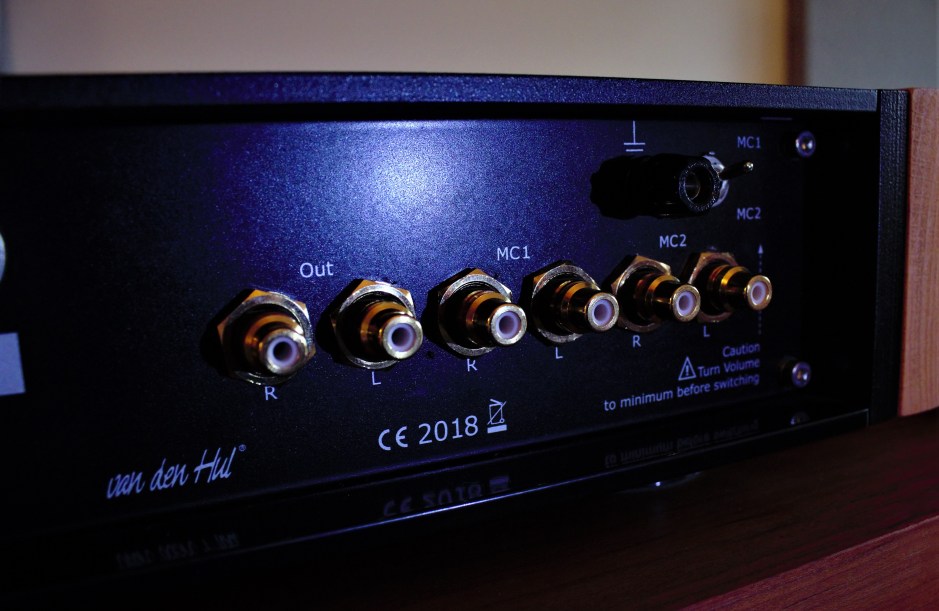 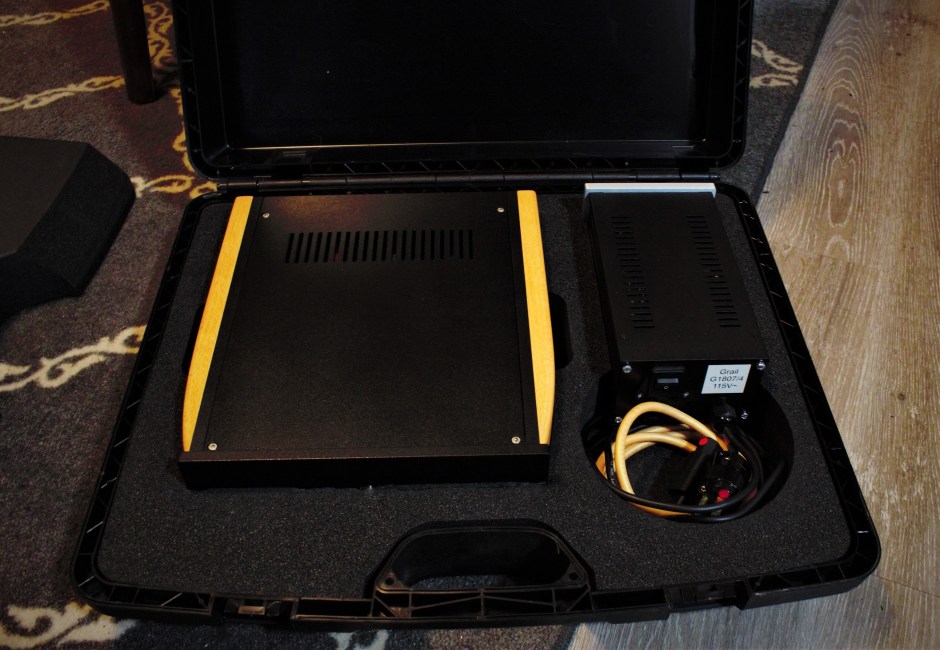 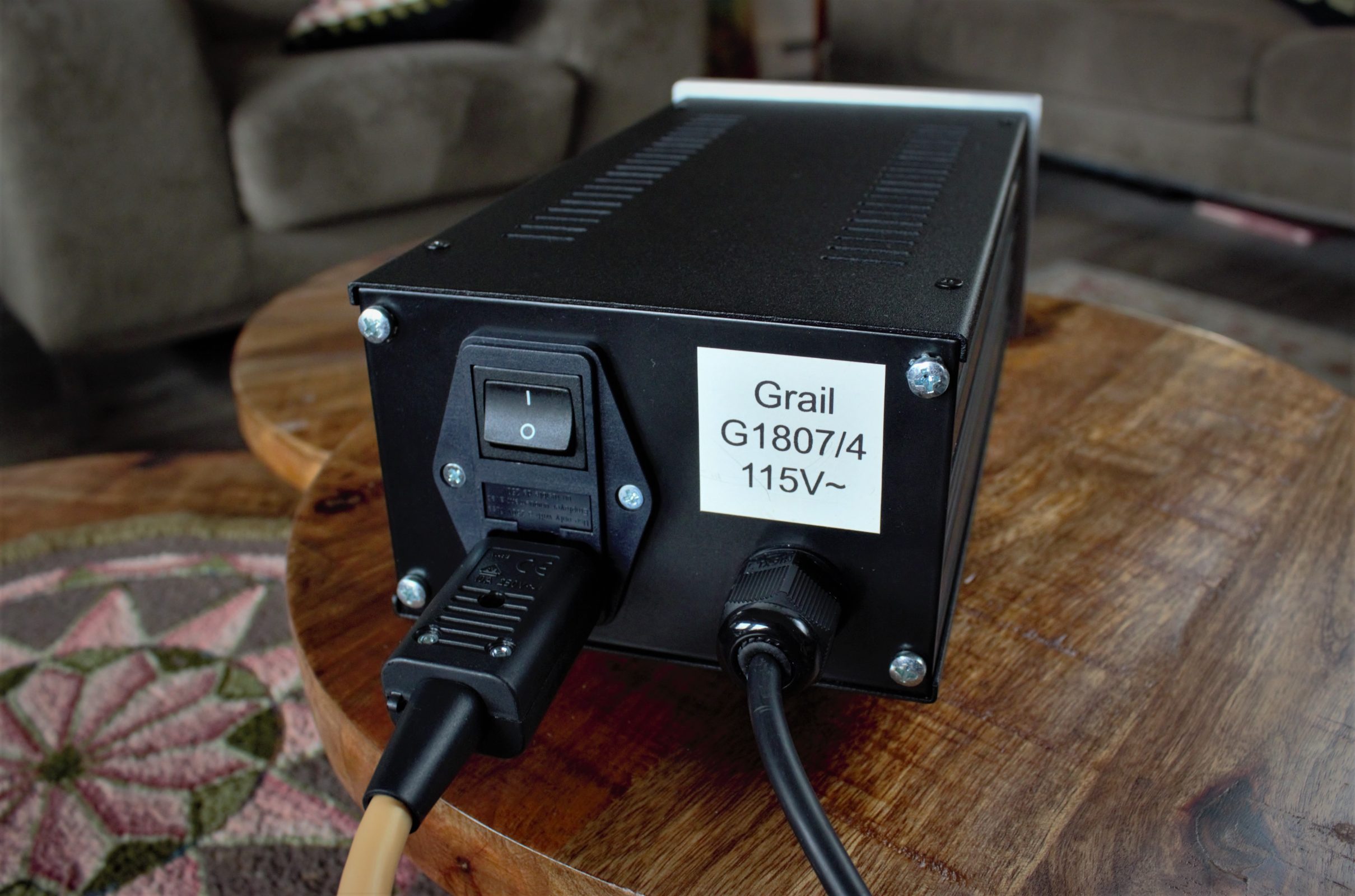 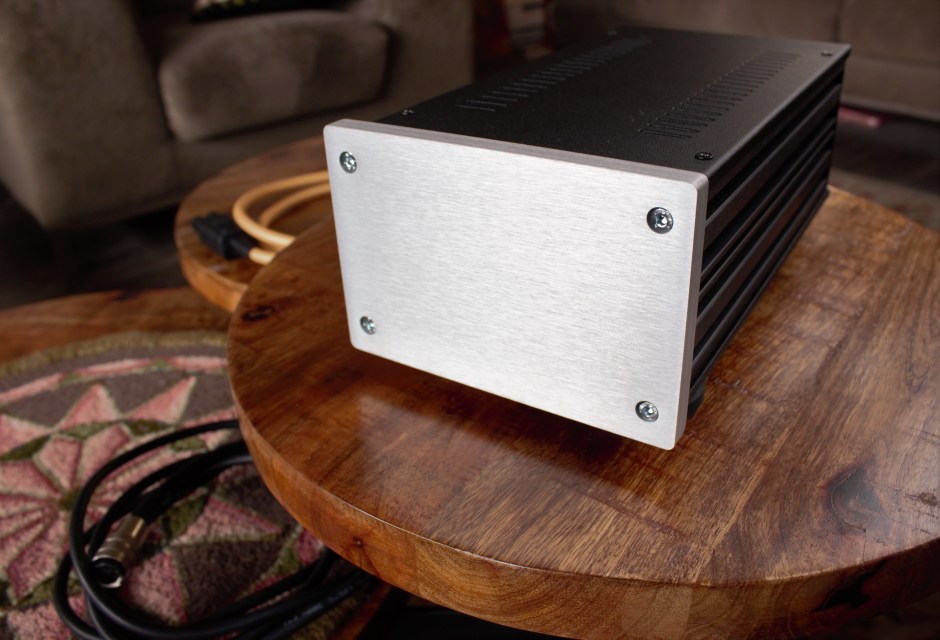 It’s that time of year for me, time to evaluate all these holiday jazz albums that have made their way to me over the past few weeks. Year after year I tell myself that I’m […]