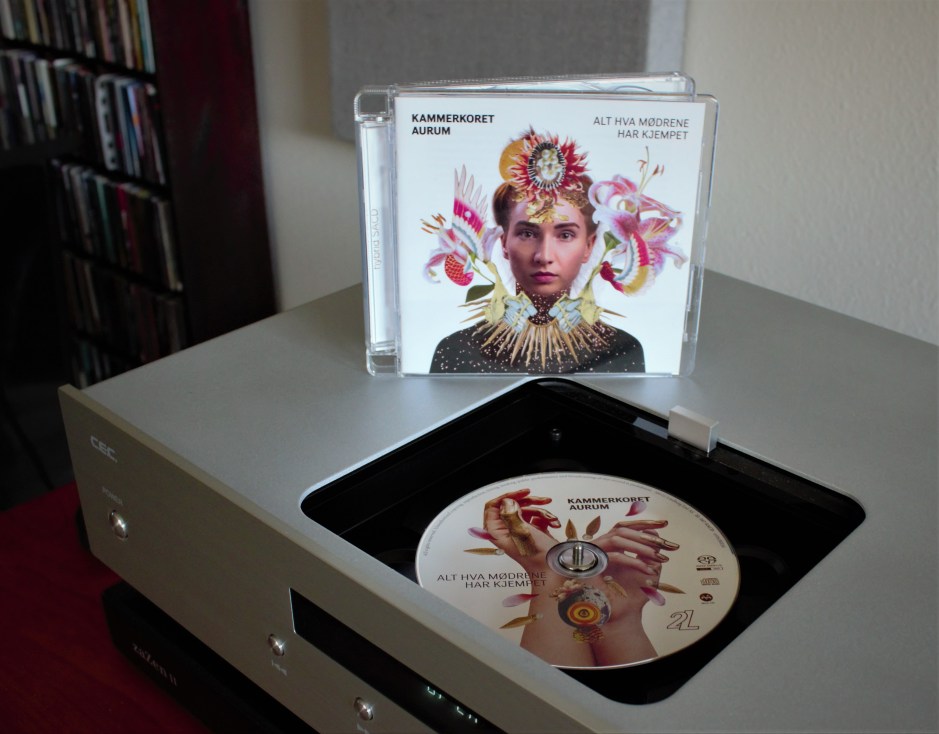 The last time I covered a 2L Recordings release, the MQA-CD sampler, it caused an uproar because the MQA technology is so controversial and the camps are so clearly entrenched and the comment section instantly turned into a battlefield. My take was that the sampler contained so much beautiful music that I didn’t want to bother with the A/B comparisons between formats. It didn’t matter–I was still called out for both failing to do the comparisons and even mentioning the letters M, Q and A in the first place.

One of the most exciting reasons to listen to the new Kammerkoret Aurum album, however, does have to do with new digital technologies and formats. Much of that excitement comes from the CEC DA5 DAC and TL-5 transport from Japan, which gives me an easy way to evaluate MQA as well as handle DXD 24-bit 352.8kHz sampling rates. I’d still love to listen to my entire 2L collection with the surround mixes, too, but the CEC gear can’t do everything. But it does make it easier to dig into 2L’s formidable array of recording tech.

But with Alt Hva Modrene Har Kjempet (“All That Our Mothers Have Fought”) from Kammerkoret Aurum, I still came to that fork in the road, where I could explore the different formats or just succumb to another amazing recording from Morten Lindberg. This is, after all, my favorite type of 2L release, a chorus recorded in a big Norwegian church, just layer after layer of sound. I can to only one MQA-based conclusion from the first few listens–I felt this recording had just a bit less warmth in MQA, but more detail. The warmth, as you might expect, is something I desire, but there’s such a wealth of detail here that I enjoyed the very physical sensation of singers moving around, making so many beautiful noises in very specific spaces.

Alt Hva Modrene Har Kjempet  is a selection of pieces from contemporary Norwegian composers such as Eva Holm Foosnaes, the director of Kammerkoret Aurum, as well as Tone Ase, Trond Kverno, Ellen Lindquist and more. The theme here is “choral works portraying strong women,” despite the fact that men’s voices are often heard as counterpoints. This recording is superb because it does so much more than capture a group of singers performing in a big church. No, this is something more human, full of distant voices, whispering, whistling, letting go of both the playful and the tragic. (You’ve never heard lamentations sound so melodic and haunting as with the third movement of Ase’s titular composition.)

Alt Hva Modrene Har Kjempet from Kammerkoret Aurum is full of unusual but heartfelt music, superbly varied and pushing the boundaries of what a chorus should and shouldn’t do. That’s the real reason to listen, to be swept away by voices rather than dissenting opinions on the internet.

It’s not often that you learn one of a jazz musician’s past gigs was as a pianist at Walt Disney World from 1999 to 2020. Chris Rottmayer can–and does–put that on his resume, but that […]

Contemporary jazz, by design, can be easily divided into things you’ve heard before and things you haven’t heard before. If that sounds like oversimplifying, and maybe it is, then think of a jazz album that […]