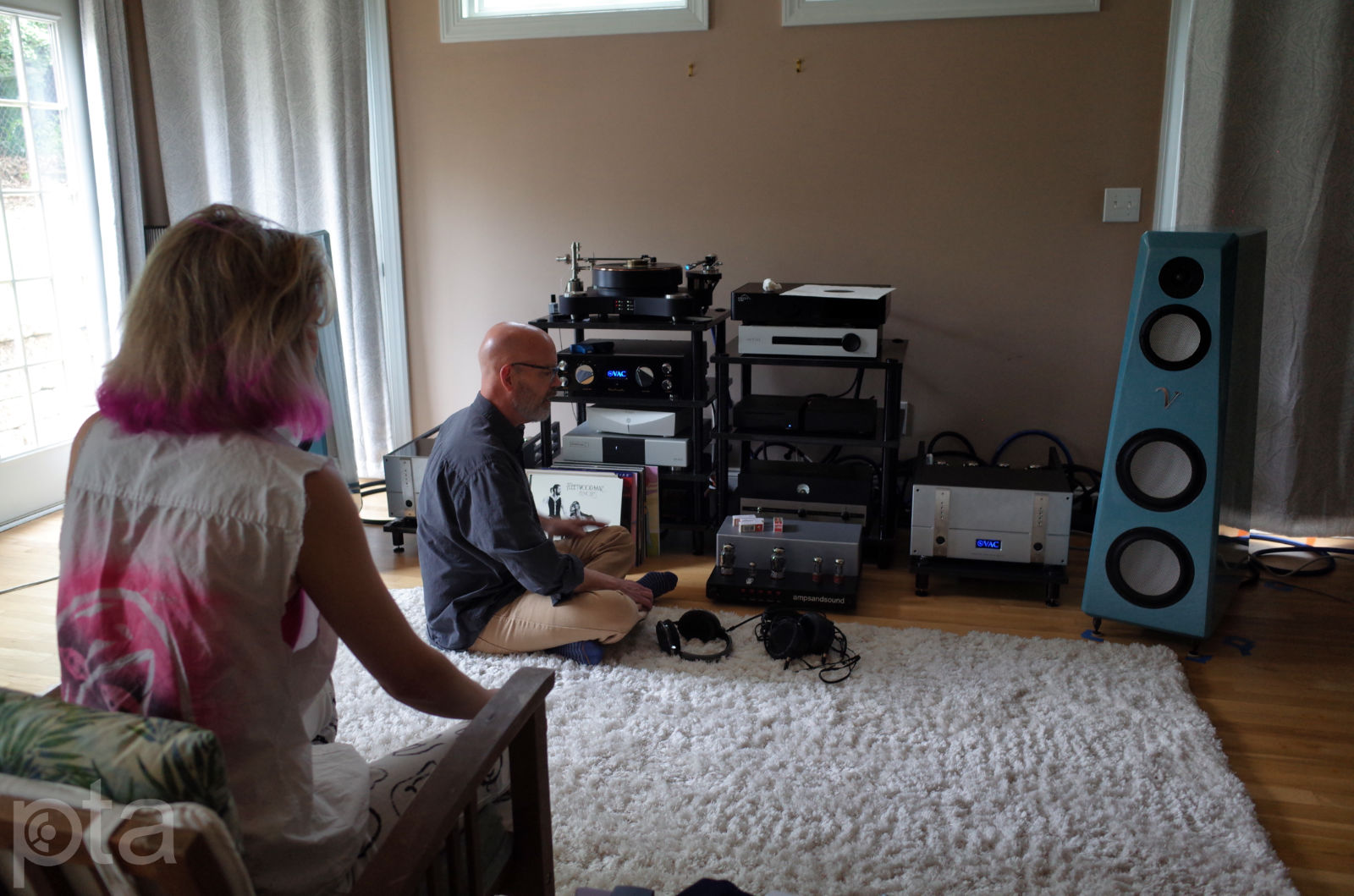 Editor’s Note: Before we dive into Hubcon 2022 coverage, let’s take care of the elephant in the room—what the hell is Hubcon? Hubcon is a gathering of Part-Time Audiophile writers and editors. During our planning of this strategic-social event several exotic locations were discussed: those included Toronto, Hawaii, and Cartagena. Alas, we decided on something closer to home for our initial outing—the state of North Carolina. Home to both Dave McNair and Eric Franklin Shook, and within reach of Grover Neville, Graig Neville, and Jameson Mourafetis. Including our special guest McKenzie Van Oss. In short, Hubcon is where love and audiophilia meet and shake hands.

Dave McNair and myself are quite keen on bringing people who do not identify as audiophiles into the fold. Urging them to come and see what we love, and listen to what moves us. The fact that Dave and I were also born normal human beings and more socially gifted than most audiophiles doesn’t hurt either. When we engage those who are not audiophiles, we present the goods, but let the system do most of the talking.

McKenzie Van Oss is a professional ballerina by trade, a soloist with the Carolina Ballet Company, and also a rising pop-star in her own right: writing, composing, and recording her own brand of pop music, on her own label Stereo To Heaven. Music and movement are her life, and with a life so adjacent to what moves us audiophiles it had to be tested. Would it fit? 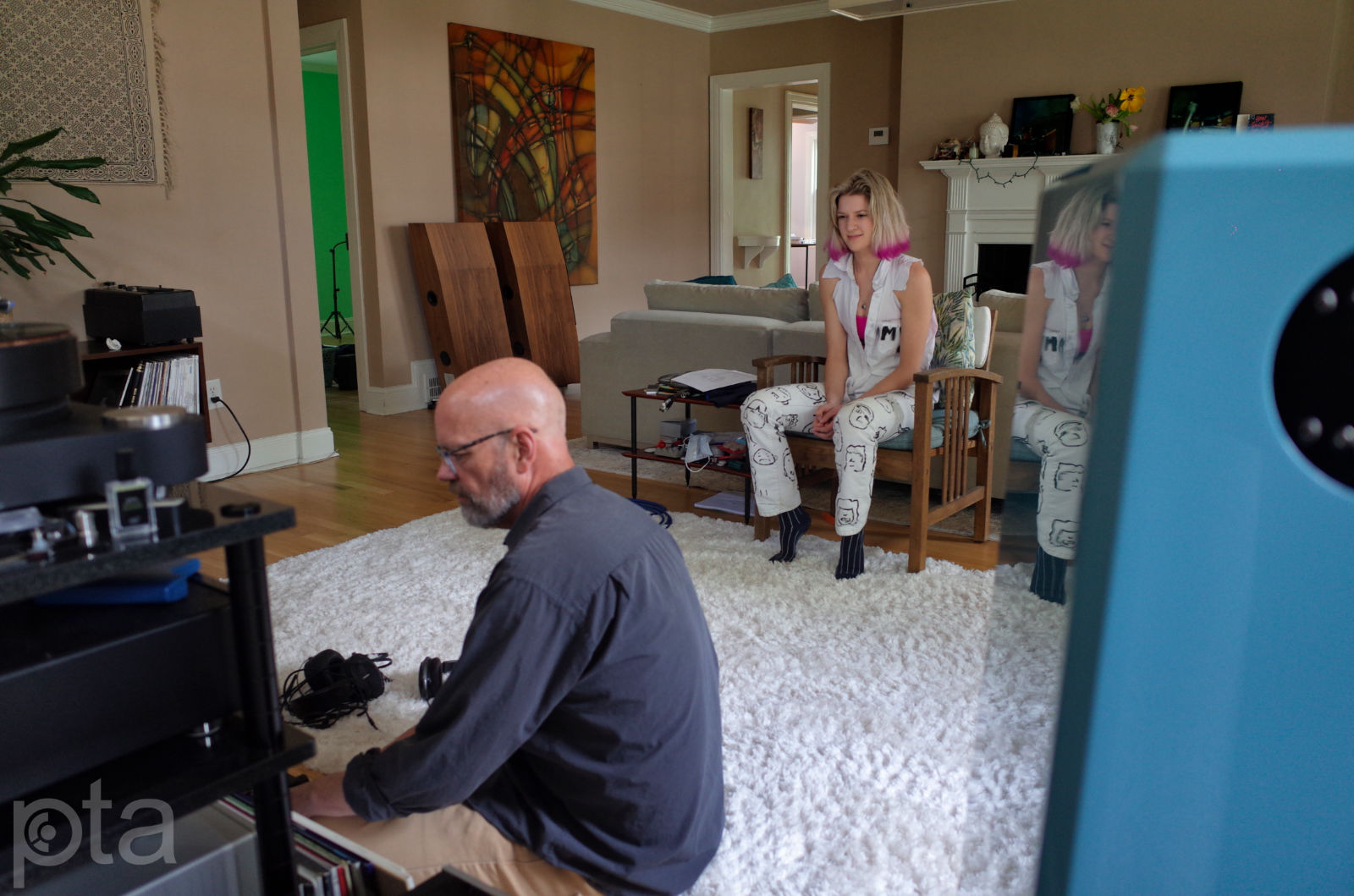 The Stereo to Heaven

In the picture above you can see McKenzie’s first reaction to music being played back on Dave’s current review system components. Von Schweikert Ultra 55 speakers (reviewed here), VAC electronics throughout, with a TW Acustic Raven derivative handing the grooves.

The track we played first was Long Distance Love by Little Feat (on Qobuz here) and its warm, rich opening played back on such a capable system is always enough to put a “stink-face” on a seasoned audiophile. Much more so the freshly initiated (see again the photo above). It’s these reactions that Dave and I live for.

After returning home, I asked McKenzie if she’d like to borrow a hi-fi system for a week, and it was an instant and profound “YES!” 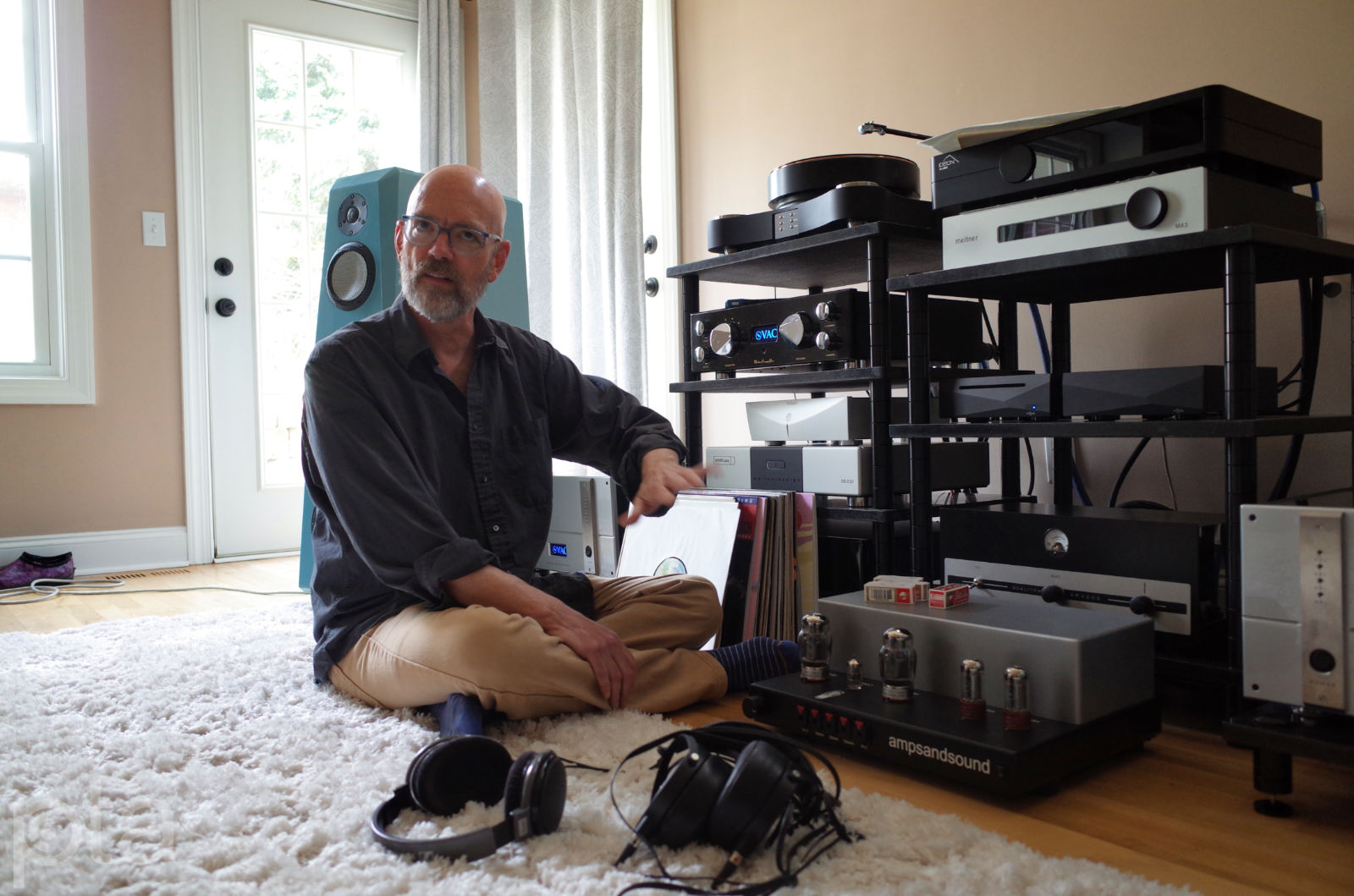 As many longtime readers will know, Dave McNair is a thirteen time Grammy winning mastering engineer, but what you may not know is that he’s worked in the music industry as a recording engineer and producer as well. Dave is an industry giant. He’s worked with big-time names like Bob Dylan, David Bowie, Prince, Bruce Springsteen, Stevie Ray Vaughan, Patti Smith, Los Lobos, Willie Nelson, Rod Stewart, Maroon Five, The Doobie Brothers, The Police, Philip Glass, Beck, Cindy Lauper, and Miles Davis.

And that’s just to name the few that I can remember.

Back to the spinning of records. From there, we dove into the first two records by Fleetwood Mac. Dave recounts the recording process and history behind the making of each album. McKenzie and I are entranced by the tales, and dazzled by the insight. McKenzie is in the middle of recording her latest album, so these tales of pop culture history from an industry insider are worth their weight in gold.

Soon thereafter, out comes the classical music and we’re off into a land hugely familiar to a professional ballerina.

Listeners like McKenzie Van Oss, though a musician, are not audiophiles (yet) and can inform us members of the press or just audiophile community members as to what’s really happening with what we hear in our systems.

McKenzie’s hearing is exceptional and her vernacular on the topic of audio and sound is astute as any we’ve met. So in many senses, she was confirming for us some of the things we claim to be sure of, but wouldn’t risk our lives trying to answer without phoning a friend. 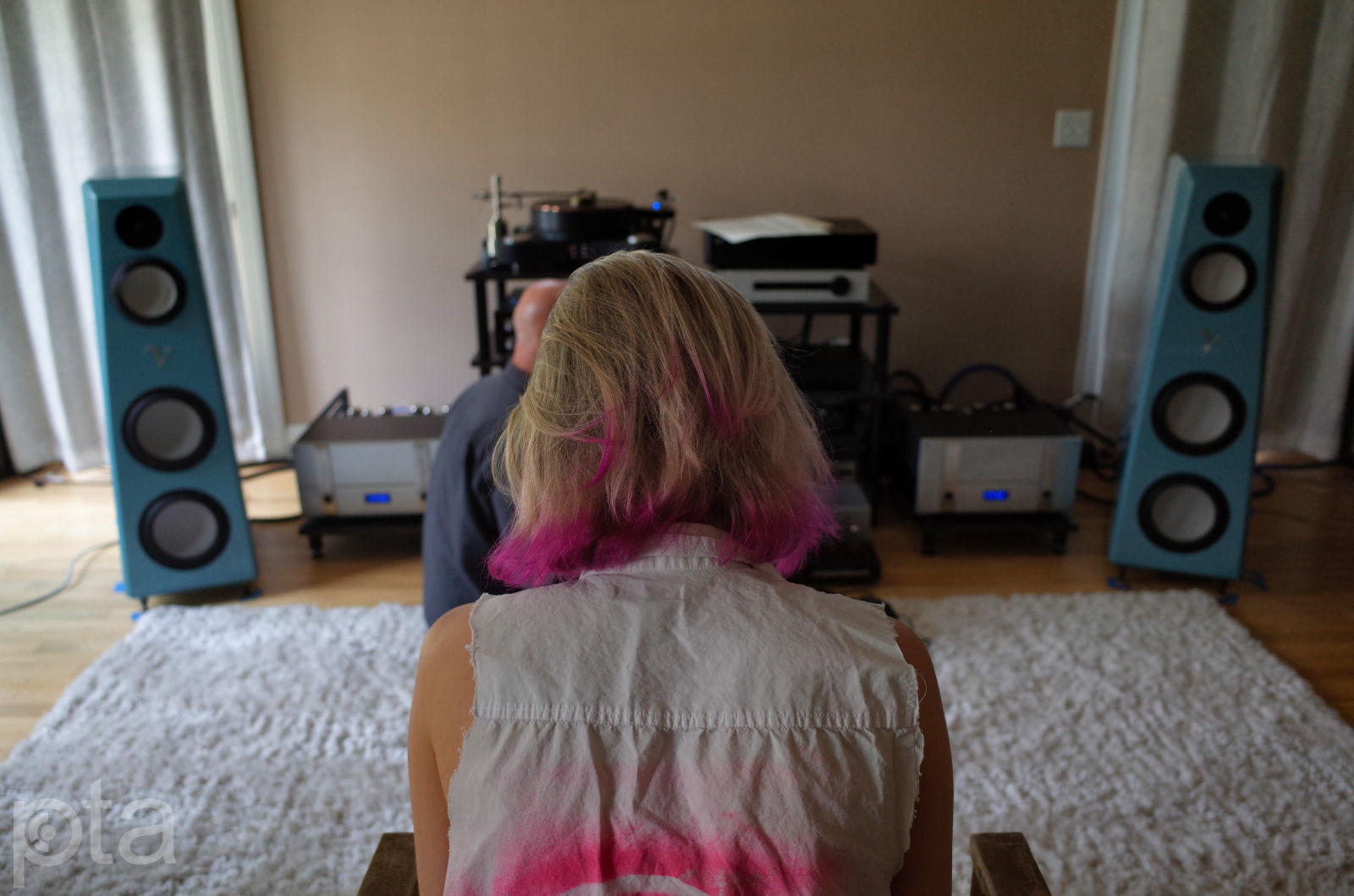 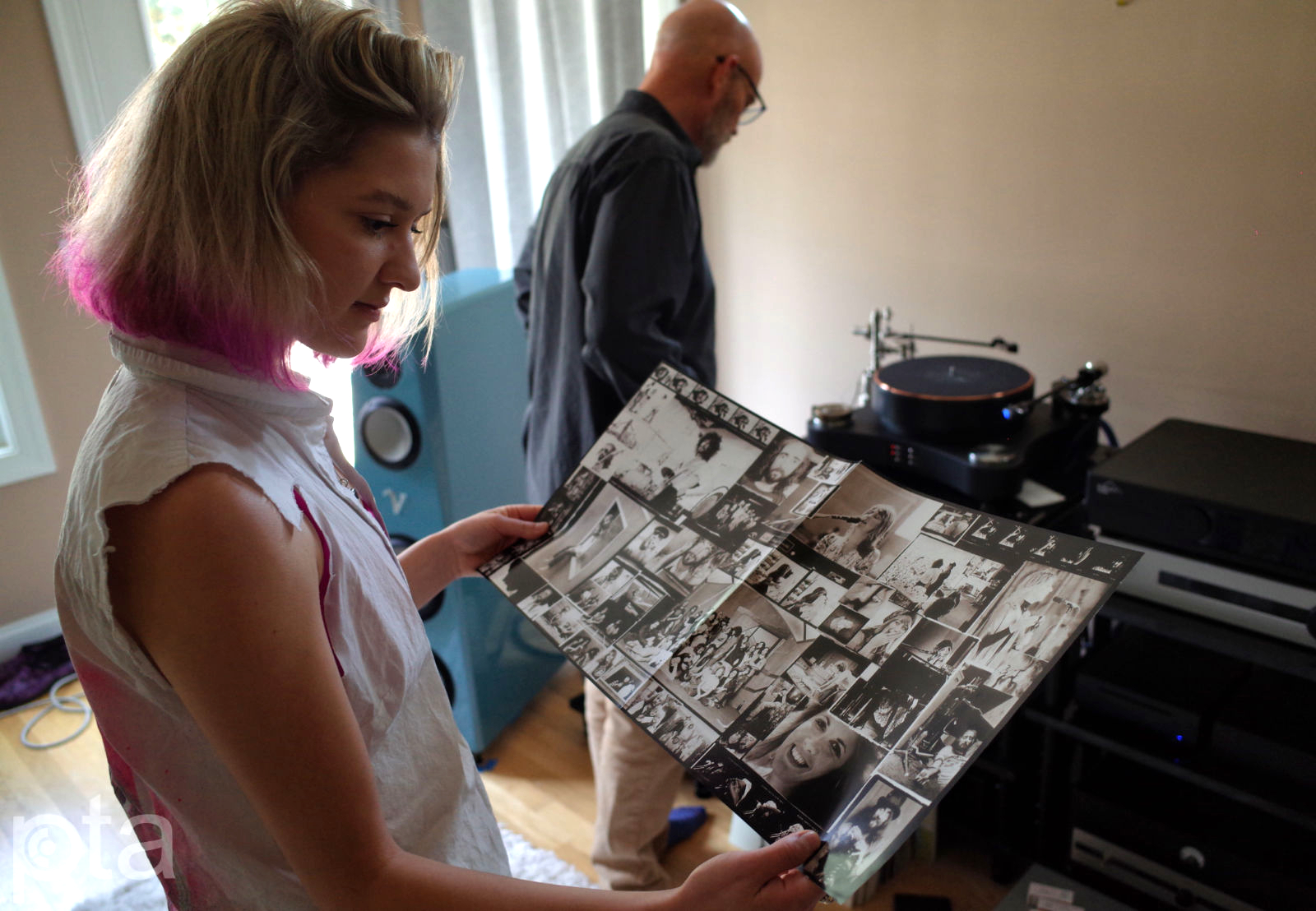 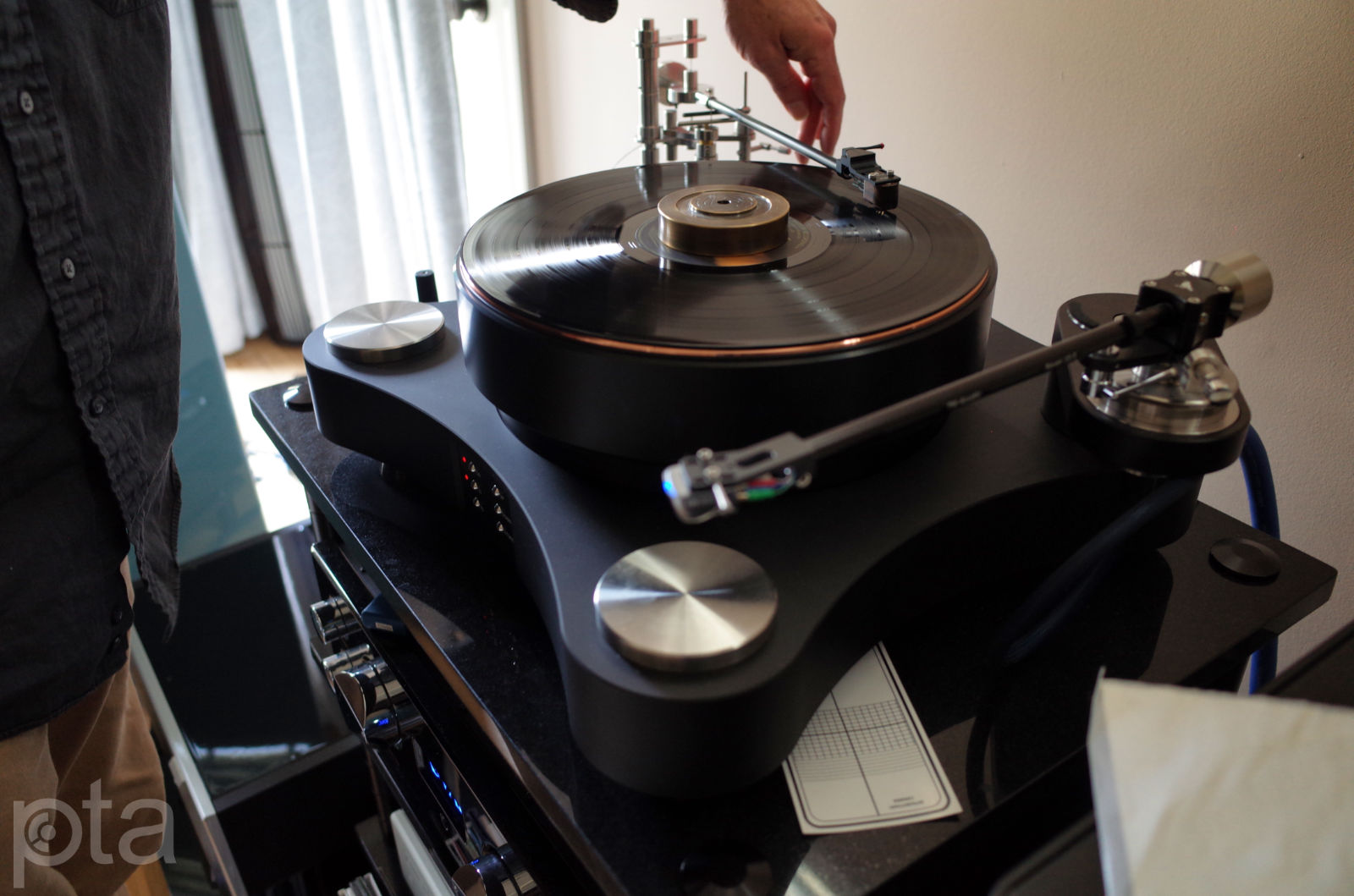 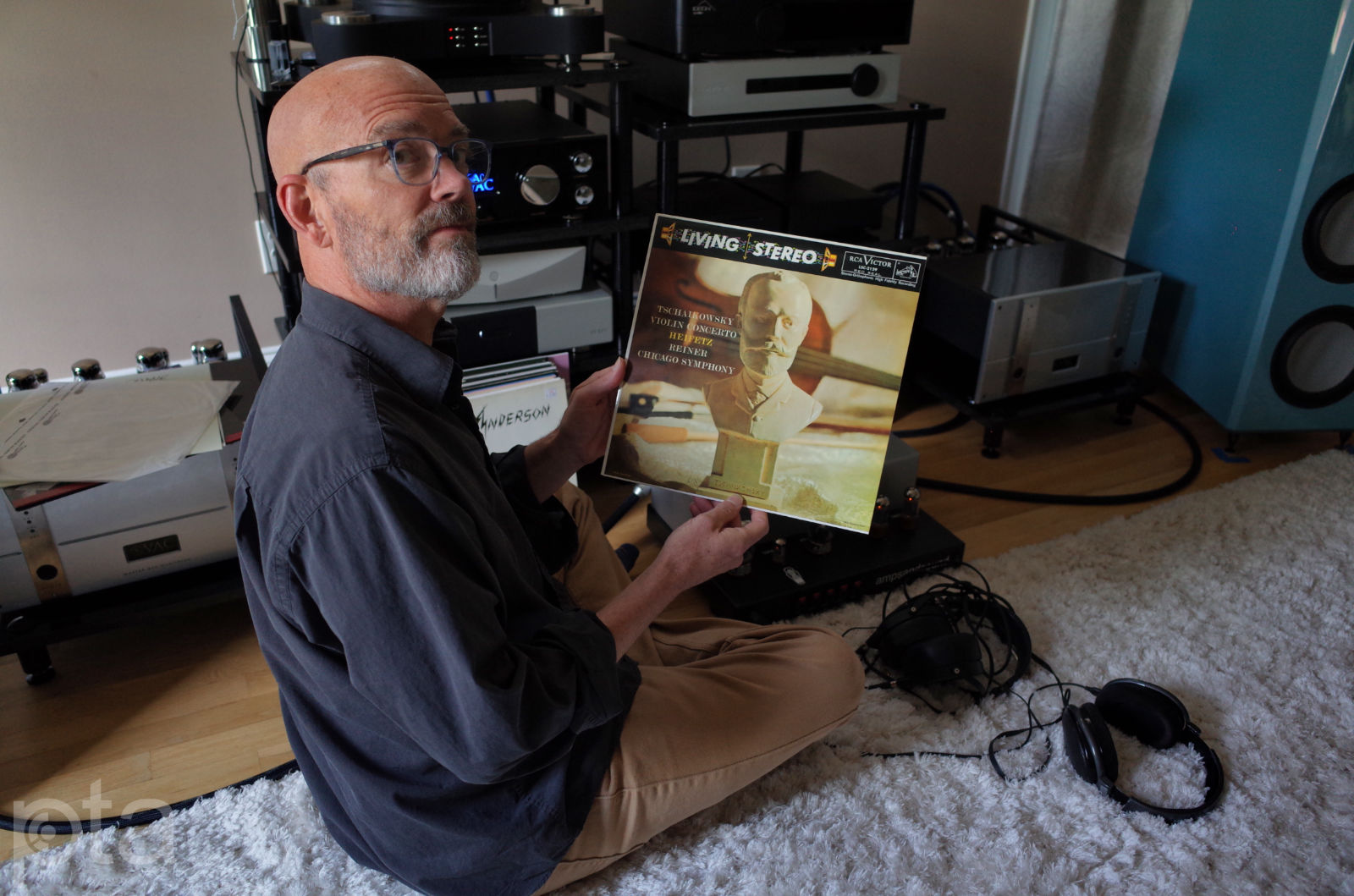 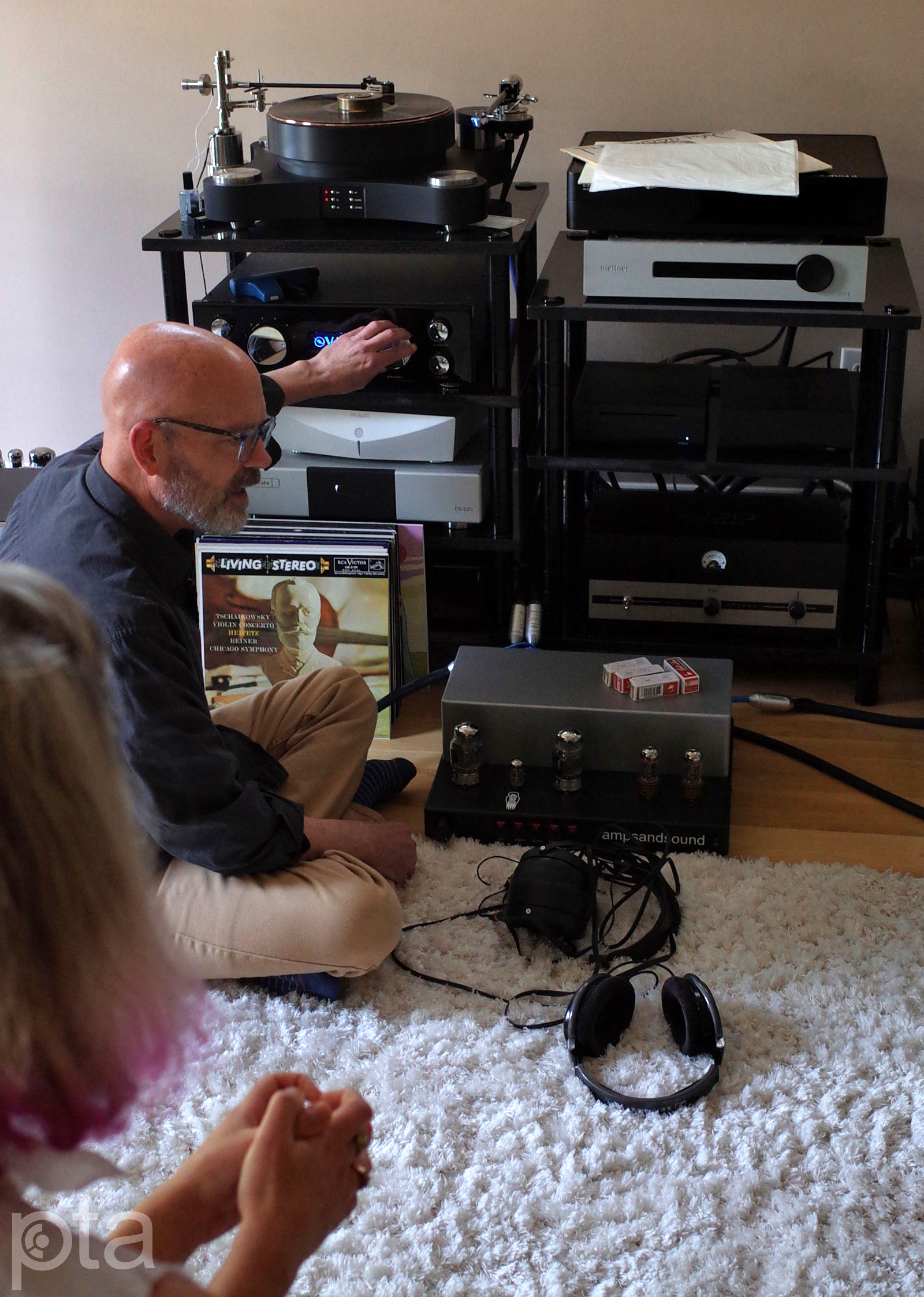 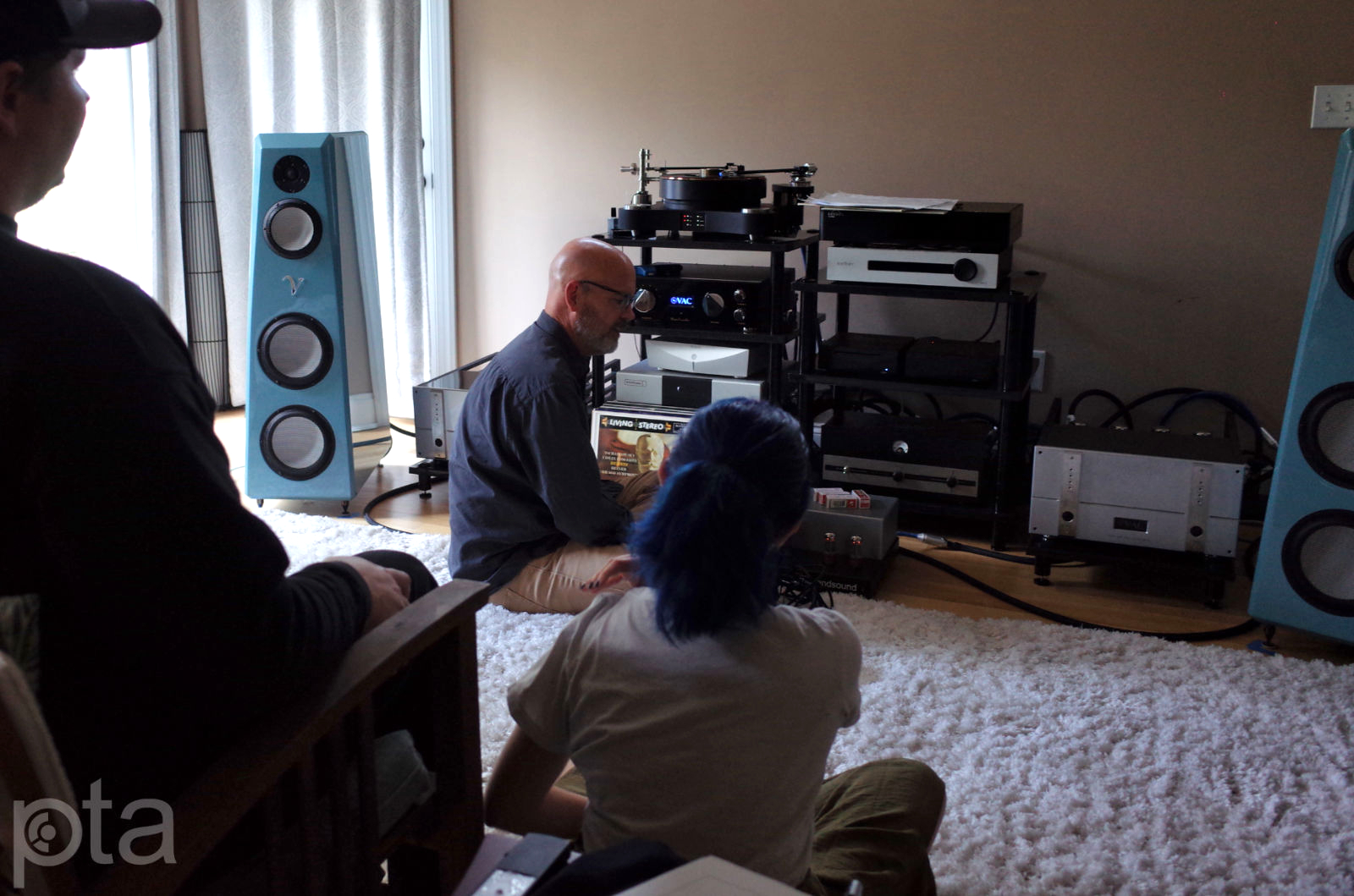 Being a mastering engineer, it’s not uncommon in today’s music industry, whether right or wrong, for a client (musician) of Dave’s to be sent a test pressing from the label.

The issue with that is, quality control should be in the hands of the pressing plant, and not the artist. Most artists don’t even have turntables or the requisite QC experience when it comes to divining whether or not a test pressing meets the mandatory criteria to proceed with production pressing.

Luckily, Dave can sometimes lend a helping hand in these matters. But it’s still rather odd for the pressing plant to thrust such duties onto the artist. Again, another insider lesson we’ve learned from our visit today. 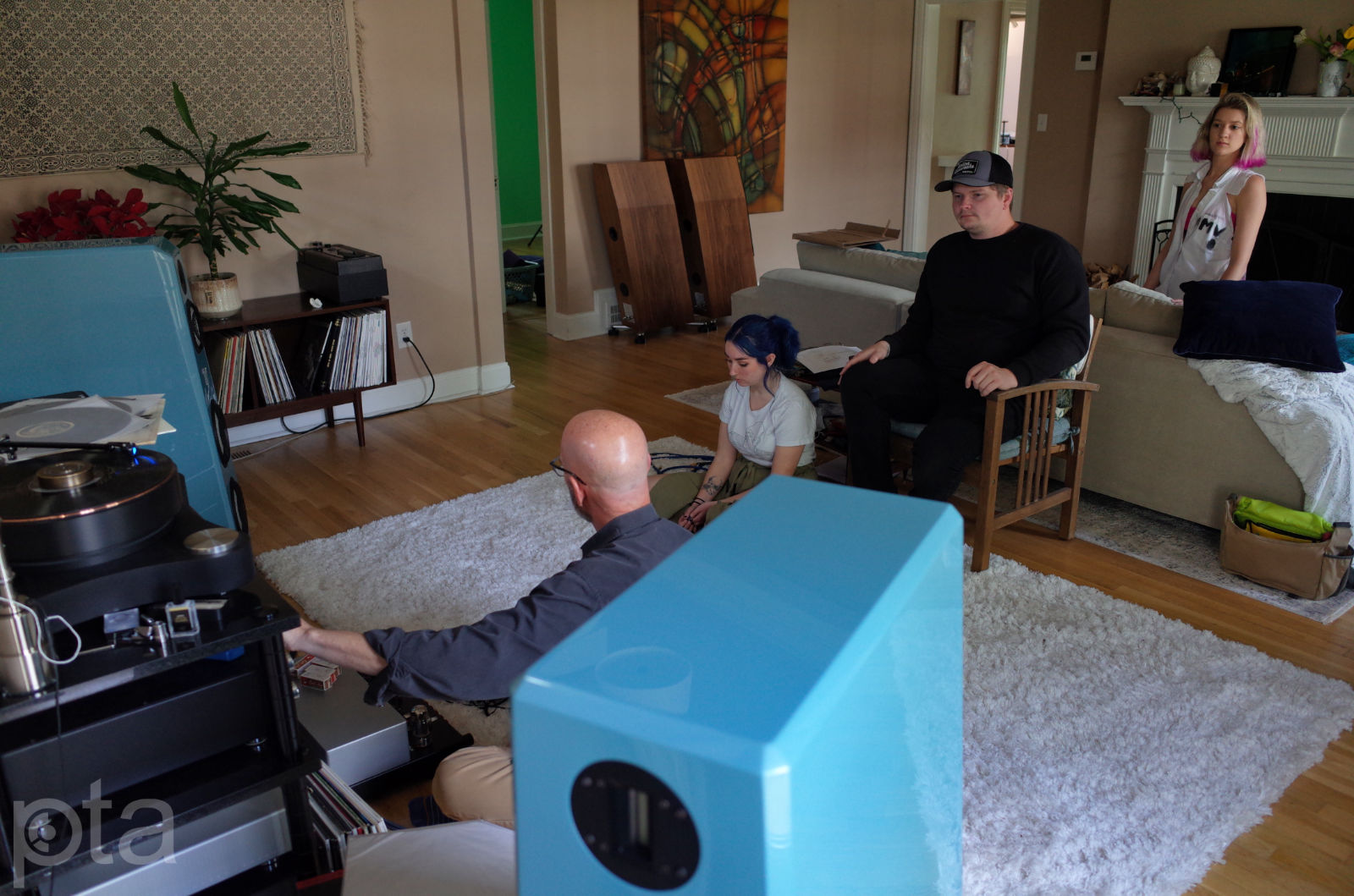 Back at The Studio

Dave, McKenzie, and myself, along with a client, head over to the studio to empower the artist with some tools for sussing out the test pressing, and making a quality case for quality control. 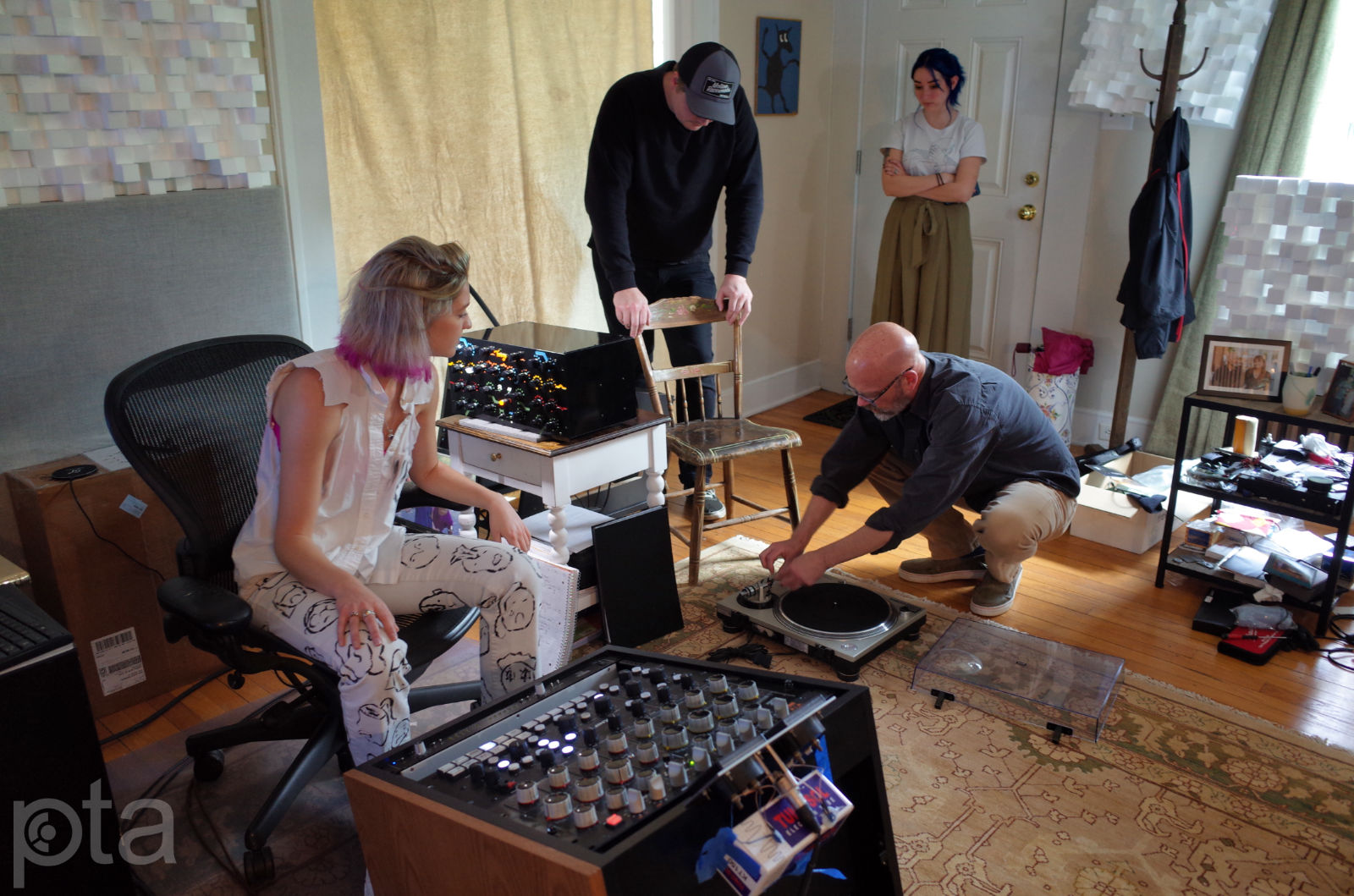 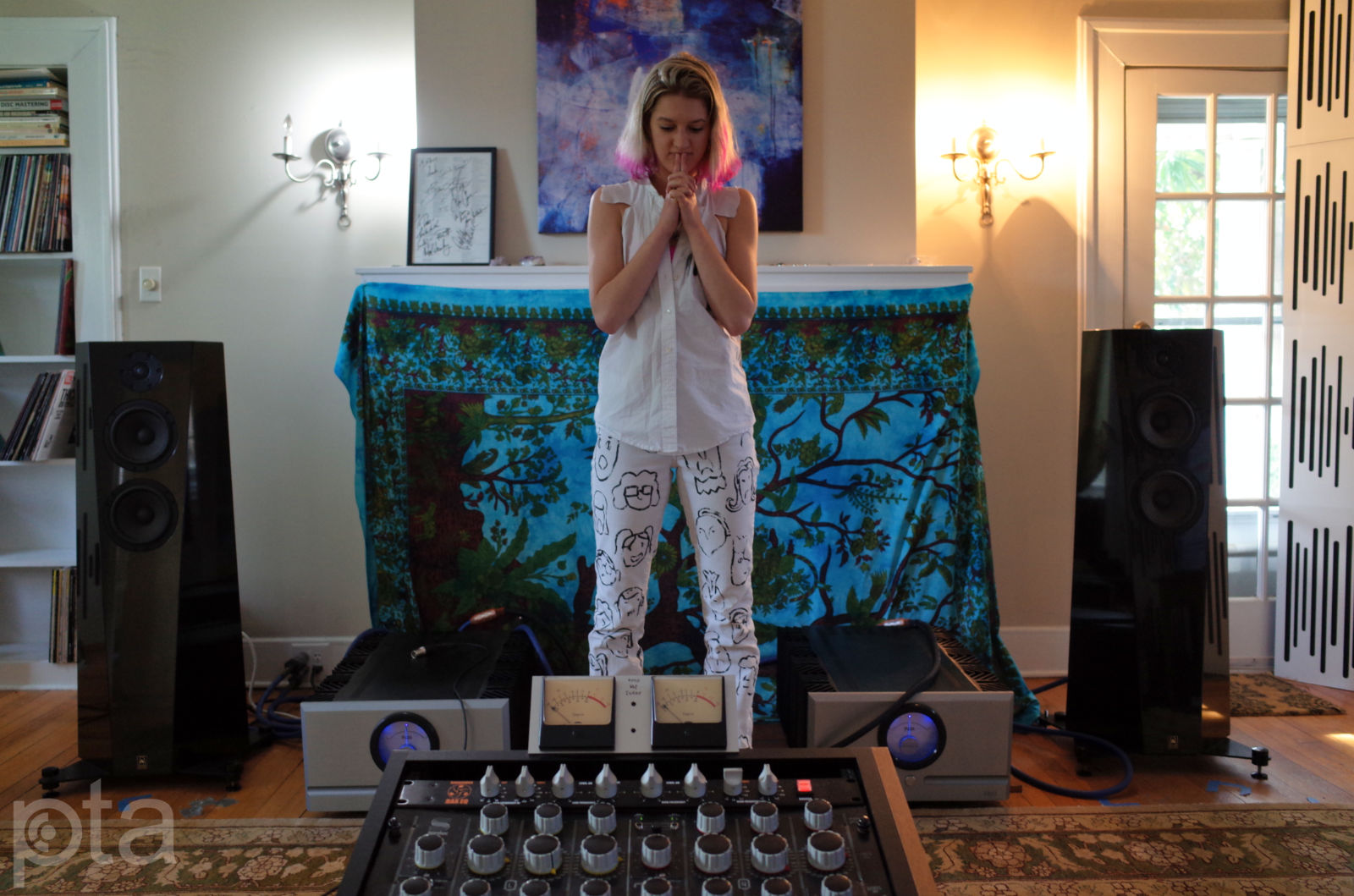 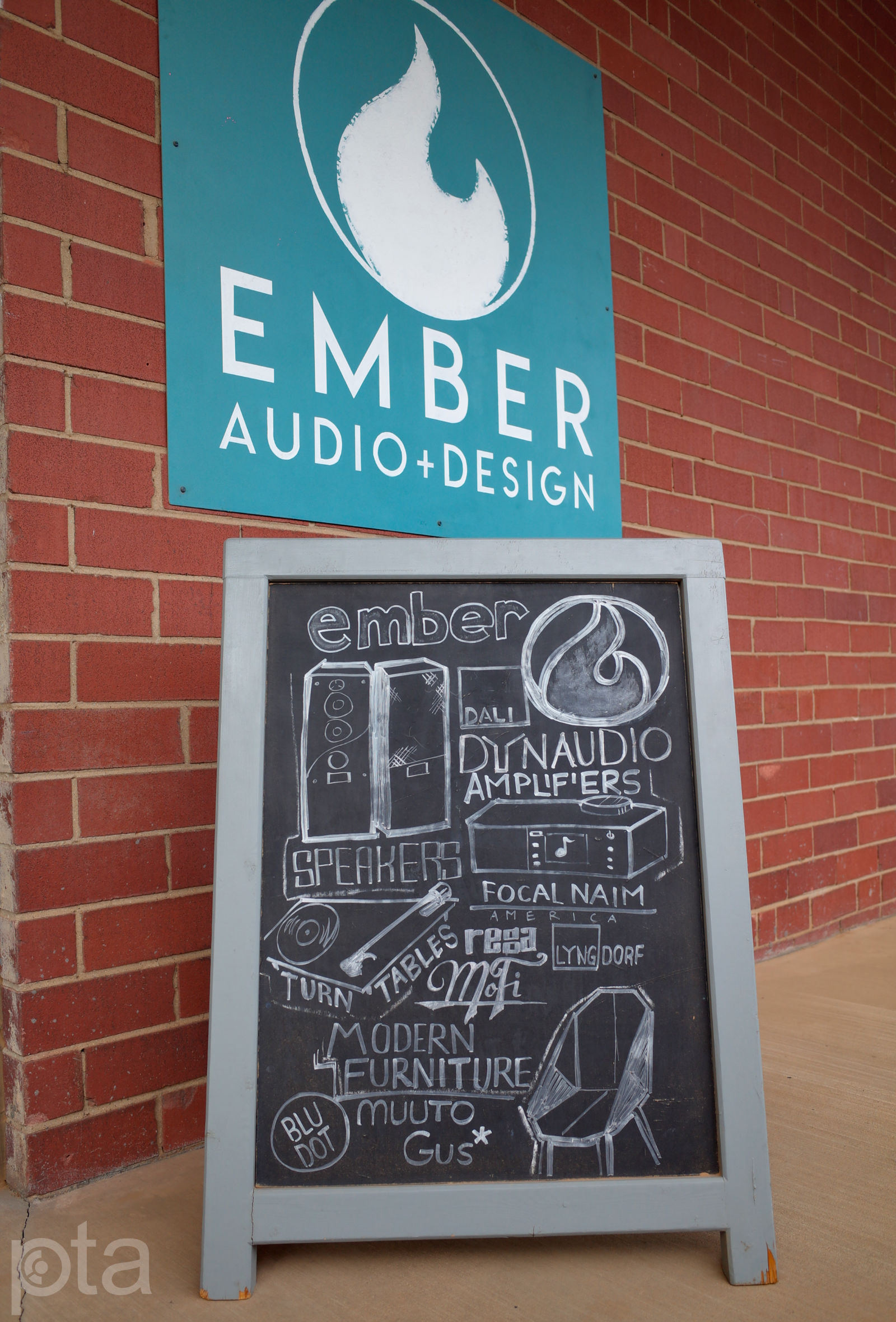 What would a trip to Winston-Salem, NC be without dropping in at Ember to visit with Christopher Livengood and listen to what’s new.

McKenzie yet again, blown away by the way audiophiles live.

Christopher was a great host for an unplanned visit, and furthermore for taking both McKenzie and I on a tour of early ’90s alternative deep cuts. Mostly quirky and fun by nature, definitely what the early ’90s alt-rock scene was known for.

Most knowledgeable about the “nightmare-circus-sex-funk-rock” genre as he is, once we played McKenzie’s latest single Grocery Store for Christopher, he lit up with excitement. It was easy for him to identify for us some unintentional influences found in McKenzie’s music. Think of Liz Phair, meets Cindy Lauper, meets Weezer–and you have the McKenzie Van Oss sound. 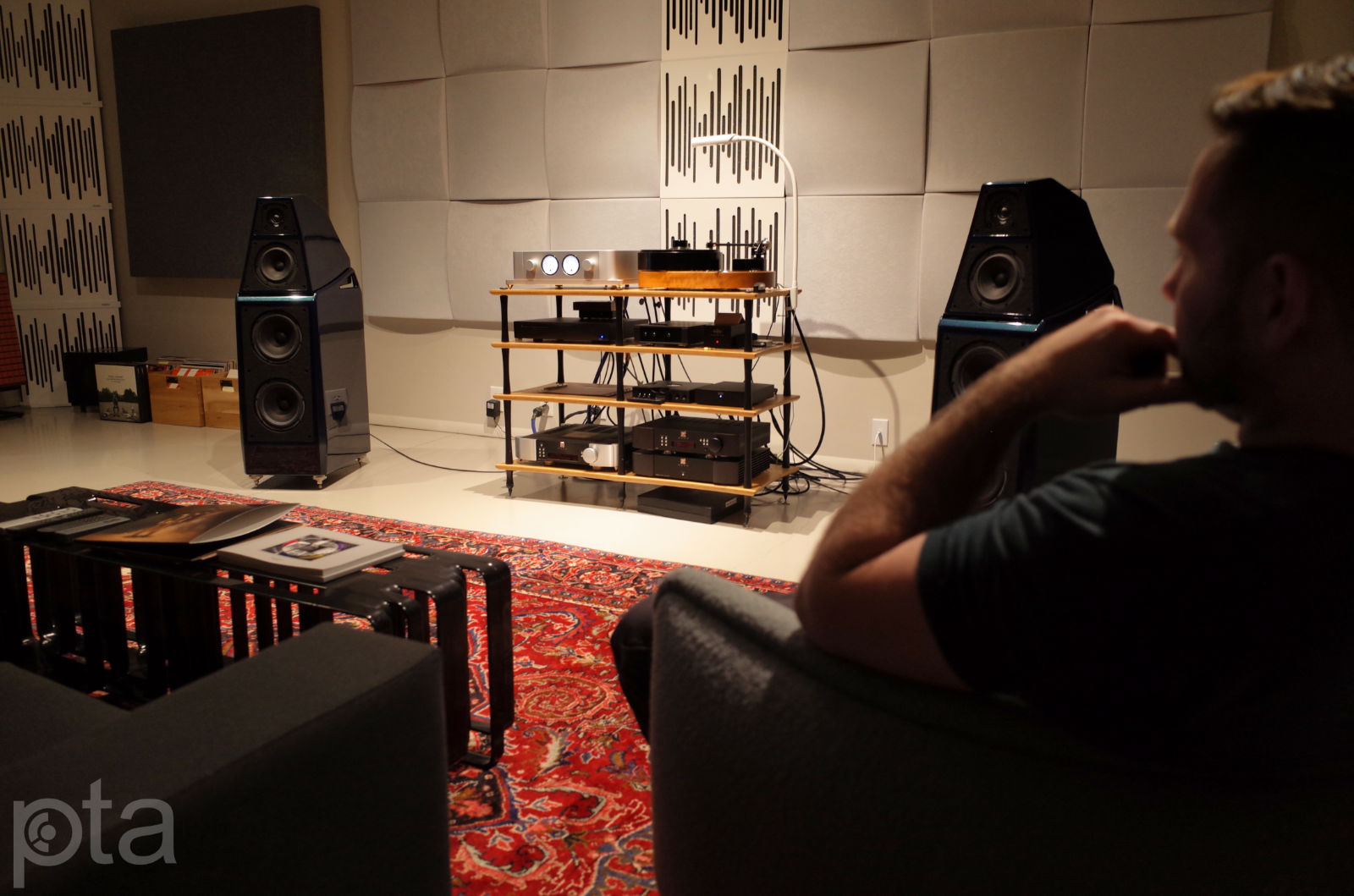 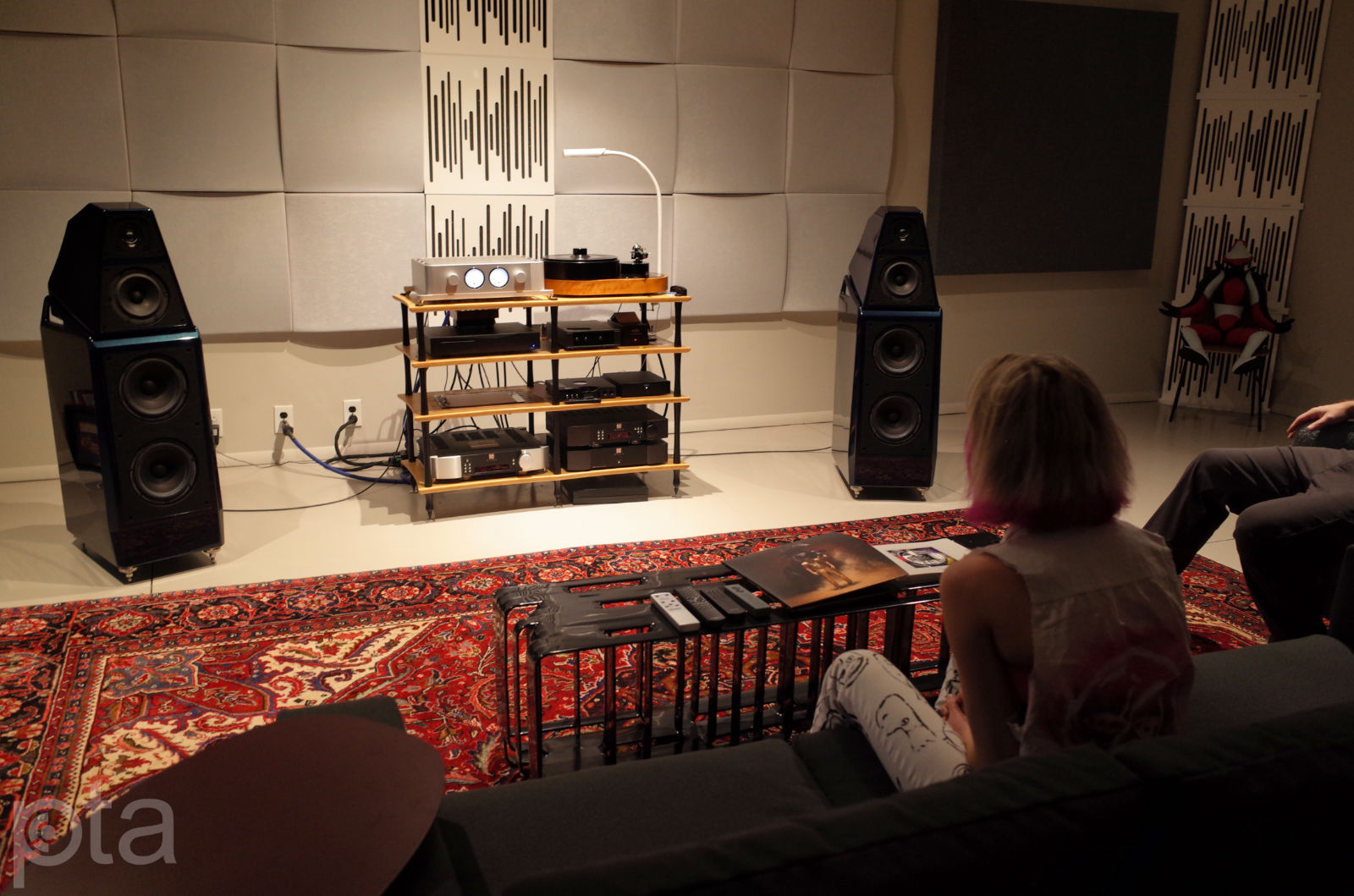 AXPONA 2014: High Water Sound and the session that wasn’t

Jeff Catalano is a wizard. This is known. He routinely pulls a maestro-level performance out of his setups, even if it sometimes feels like he’s having to get extra mojo from pulling things out of […]

Reported by Dave McNair When I walked into the Joseph Audio, Doshi Audio and Cardas Audio room at the 2020 Florida Audio Expo, I heard Jeff Joseph playing Brubeck’s “Take Five” and instantly thought, “It […]