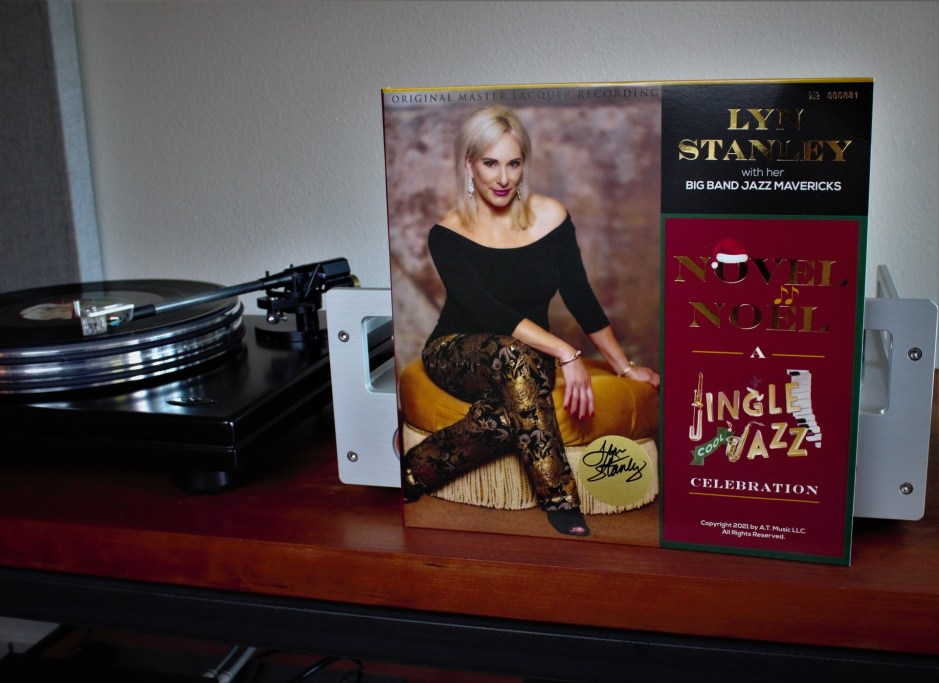 What are my neighbors thinking about me right now, with me playing Lyn Stanley‘s Novel Noel over and over in September? I thought that guy didn’t like the holidays, man he never puts up decorations. It’s true, I usually lament the idea of reviewing Christmas music every year, and yet I do it, probably because holiday recordings are important in the world of jazz and I’ve been concentrating on that genre for the last few years. Every year I get holiday stuff to review, and every year I swear will be my last.

But this is Lyn Stanley, and that means a few things. First, this is an album for audiophiles. There aren’t a lot of jazz artists who care more about ultimate sound quality than she does, so it’s probably gonna sound awesome any time of year. But here’s another somewhat surprising aspect–Novel Noel isn’t Lyn trying on a few holiday covers to see if they fit. Lyn Stanley and her Big Band Jazz Mavericks–an impressive gathering of jazz performers–have some “novel” ideas about song selection and arrangements. So while you may identify a few elegant classics here and there such as “Have Yourself a Merry Little Christmas,” “Merry Christmas Darling” and “The Christmas Waltz,” this album takes a journey down some strange and wonderful avenues that aren’t necessarily covered with gaudy, impersonal decorations.

My neighbors may not know this is a holiday album, in other words, but they’ll sure know it’s jazz. 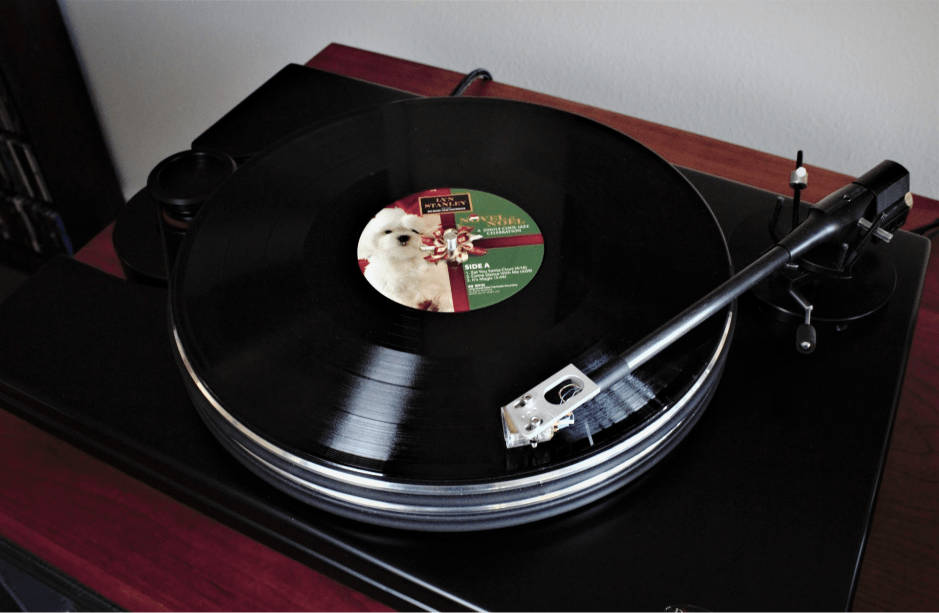 It’s been more than three years since I spent an afternoon with Lyn in Los Angeles, visiting Ocean Way Studios and heading down to Bernie Grundman’s studios and sneaking into Capitol Records. At the end of the day I asked her what was next. She’d just delivered several outstanding albums as part of her Julie London project, culminating in the incredible London with a Twist: Live At Bernie’s, a direct-to-disc treasure that I still use faithfully as an LP reference.

“A Christmas album,” Lyn replied, and I thought oh sure, that makes sense. Even though I’m not that fond of holiday music, outside of A Charlie Brown Christmas, I thought it was a smart move for a singer who has that deep and rich voice, one that can be both playful and comforting at the same time. At least it’ll sound fantastic, I thought. But that was 2019 and this is now, and there’s a lot of extra layers of context to everything we’ve done. That’s one of the reasons why Novel Noel is even better than I expected, and I expected it to be really good. 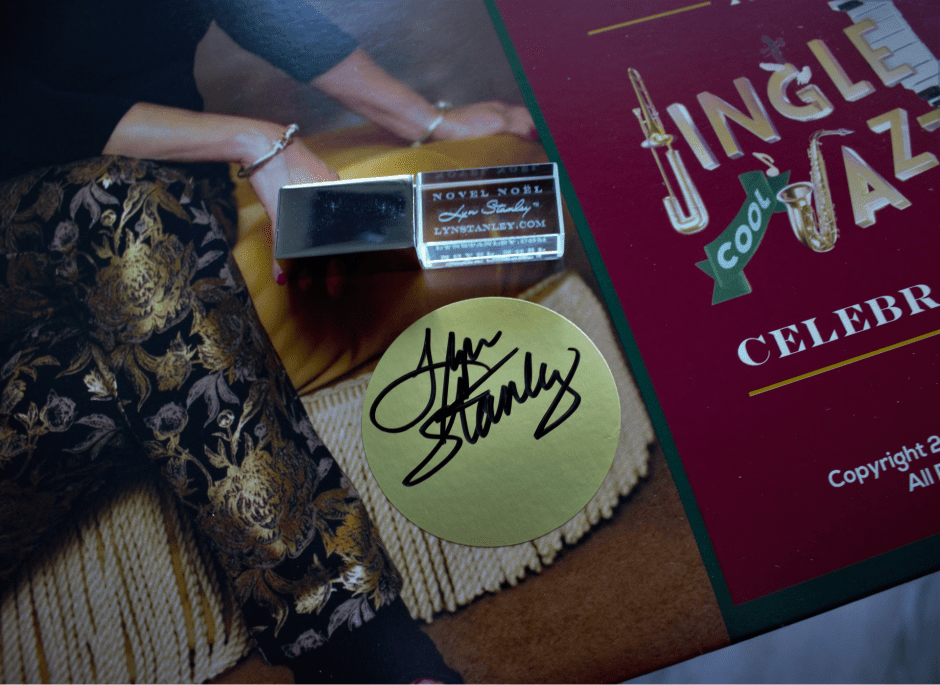 I prepared to hear Novel Noel at its best, which included assembly of a very special analog rig–my New Pear Audio Blue Kid Howard turntable with Cornet2 tonearm, the ZYX Ultimate Airy D and Koetsu Urushi Black cartridges with the Koetsu Stepup Transformer, and the Allnic Audio H-6500 phono stage. The perfect loudspeaker for listening to Lyn Stanley? That would be the Qln Signature monitors that I fell in love with at AXPONA 2022. They’re warm and open and one of the most engaging two-way monitors I’ve heard.

I was not let down. First of all, this LP pressing sounds pristine, as usual for this performer. Even though Lyn Stanley’s music is usually available in multiple formats–LPs, CDs, R2R and digital downloads (Lyn did include a gorgeous little USB thumb drive with the LP as well)–her vinyl pressings tend to be on the magnificent side anyway. On Novel Noel, I kept thinking about how silent the pressing was, and how I had to periodically remind myself that I was listening to vinyl and not some fancy hi-rez digital download. If anything, I was reminded of how this probably sounds on R2R, and how I was getting unusually close to what was on the master. 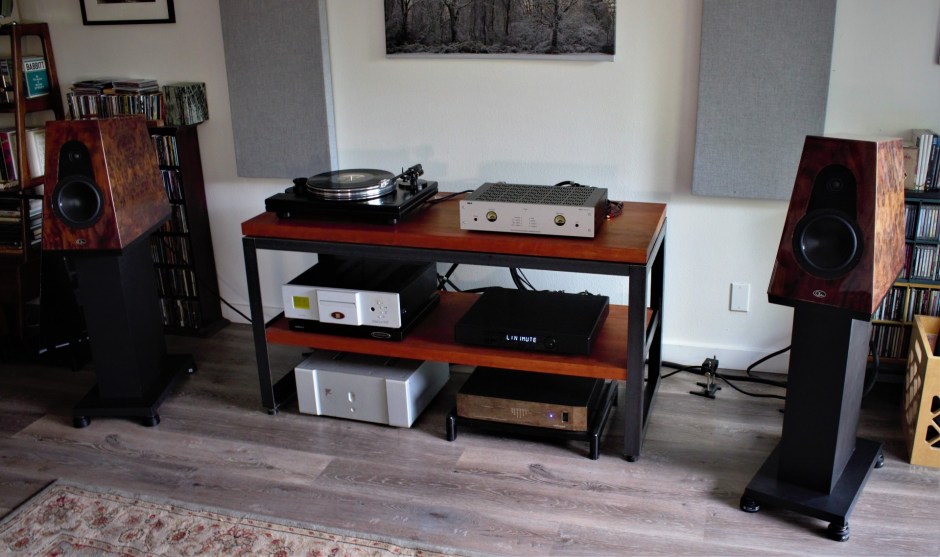 Second of all, the arrangements on Novel Noel are stunning. Lyn is usually inventive and doesn’t mind a little genre-hopping, but here she’s indulging in some truly creative choices, such as mashing up “The Little Drummer Boy” with Brubeck’s “Take Five,” and finding out how naturally they meld together.

You may notice that she’s shifted the Jazz Mavericks to the Big Band Jazz Mavericks, since the arrangements here are bigger and require more flexibility. That means Novel Noel still sees Lyn with her devoted and veteran ensemble with guitarist John Choidini leading the way. But 66 musicians play with Lyn on this album, including a lush string orchestra that lends a magical sense of scale to the album.

But I think what makes Novel Noel even more noteworthy and memorable is something in Lyn’s voice, and added layer of sadness. When I met Lyn it was just before the pandemic, and three years later I can hear new depths to her vocals, which are tinged with loss yet reinforced with the desire to press on and survive. She’s still fun and swinging when she needs to be (as in the opener, “Zat You, Santa Claus?”) but with a profound sense of gratitude for still being here, performing her music with the same high standards and relentless precision along with some of the most legendary musicians in jazz. We’re all still here–let’s play like we mean it.

So I will play Novel Noel during the holidays–for other people who may be stopping by, and for myself. Surprisingly, this holiday music will mean something to me, which might be a first.

“All the world’s a stage.” The blending of jazz and William Shakespeare’s prose seems both logical and a little daft, especially when you think of all those cool jazz tropes that are based on a […]

Welcome to the Best Phono Preamplifiers section of the Part-Time Audiophile Buyers Guide for 2022. The Guide is more than “We heartily endorse this [fill in the blank ].” This collection represents our enthusiasm. Every product […]