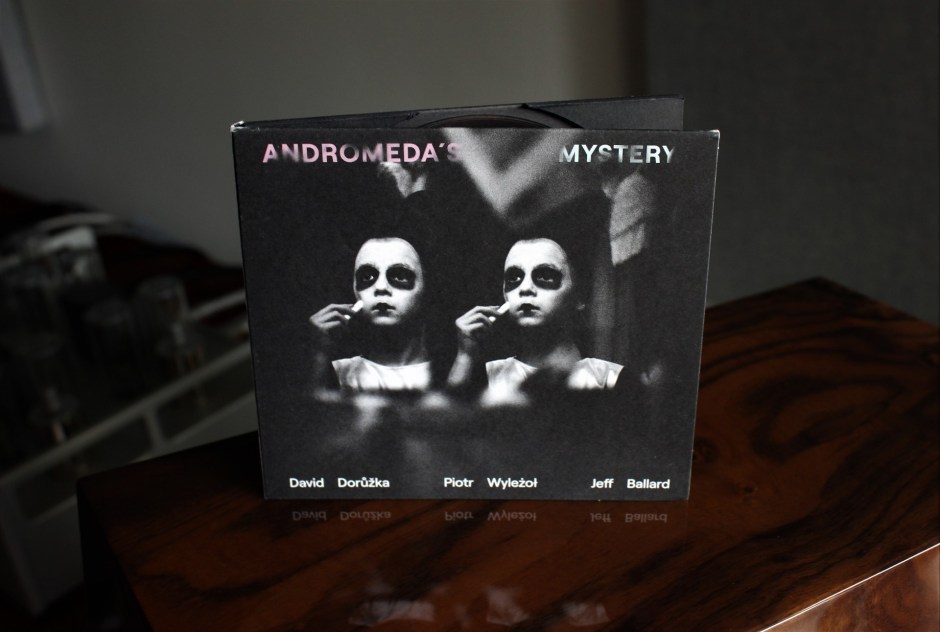 While it’s true that I’m trying to take a break from contemporary jazz these days–I really needed to poke my head out and see what else is going on–there’s still contending with that wild card, these European jazz CDs that tend to appear out of nowhere, sometimes straight from the artists with a heartfelt handwritten note enclosed. It’s been a little while since I’ve received a small padded manila envelope covered in postage stamps from faraway lands such as France, Russia and Switzerland, but Andromeda’s Mystery is now here, reminding me that I still love all types of jazz as long as something new is brought to the table.

Andromeda’s Mystery comes from the trio of David Dorůžka (guitar), Piotr Wyleżoł (keyboards) and Jeff Ballard (drums), who met last year and decided to create a jazz sound that drew equally from each of the three members’ diverse upbringing, and to suggest new links to the worlds of rock, pop and other types of music. Their first performance together, recorded by Czech Television, led to a six-hour recording session the next day, and the result is Andromeda’s Mystery.

Andromeda’s Mystery is one of those jazz albums that sneaks up on you after repeated listens, and it does sound different each time as some ideas emerge and others make their point and leave discreetly. There is traditionalism at the guitar-piano-drums core, somewhat sad and melancholy and measured, but deeply melodic, and yet there’s a rhythmic component, based on Slavic folk traditions, that keeps the performance lively. The icing on the musical cake, so to speak, is the addition of analog electronic instruments such as a Fender Rhodes and a Moog. There’s a lot of history in those old keys, and not everything is running at original factory specs, which is sort of the point.

If Andromeda’s Mystery sounds like another exercise in lo-fi experimental music, fear not–it’s a beautiful recording, with solid borders between the electronic mischief and the intimate performances from the trio. At one point, David Dorůžka repeats a few higher notes on an electric guitar and the individual tones start crossing each other and interacting far into my listening room. There are moments in this album where spaces suddenly appear, and you can feel the physical presence of that recording studio and the three men who, having just met, found a lot of magic between them.

How many of y’all love The Flying Burrito Brothers’ Gilded Palace of Sin or The Byrd’s Sweetheart of the Rodeo? How about Nashville Skyline? Despite the fact that I was alive during the great California […]