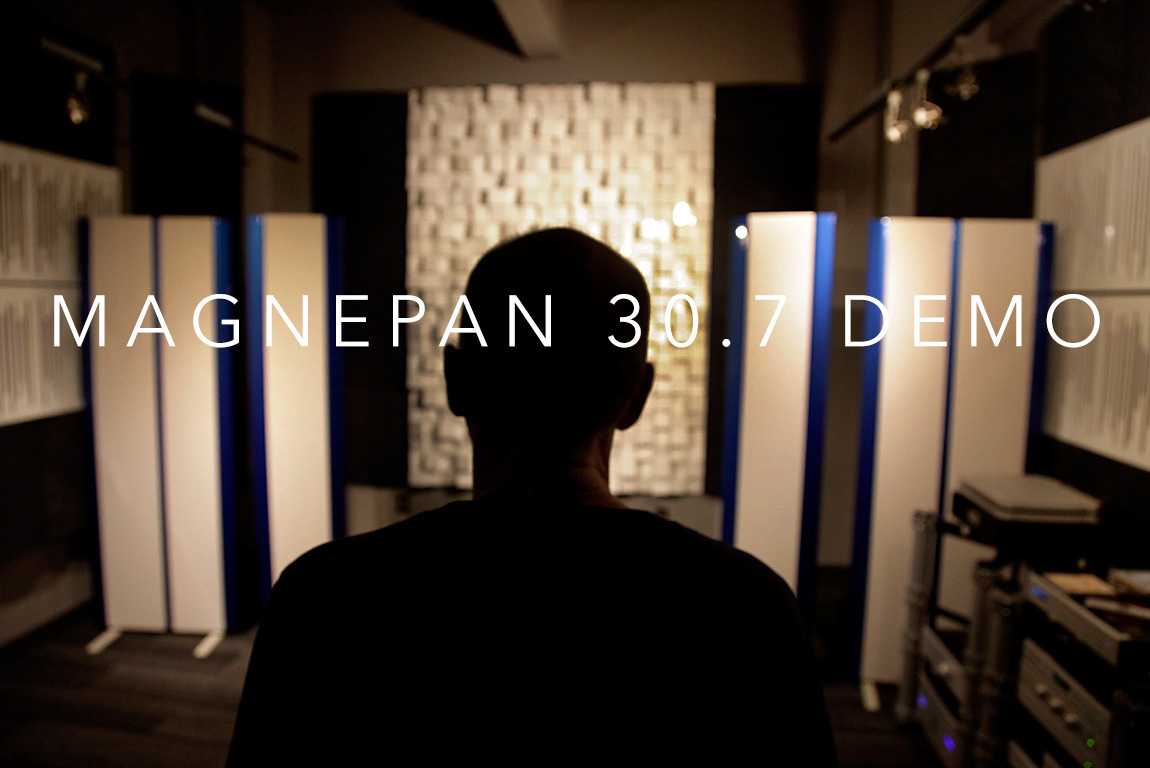 A lot of them. Walking in circles, and randomly bumping into each other.

That’s what the Magnepan 30.7 demo event at Hifi Centre in Vancouver would have looked like if you peeked through the round window in the door to the room, and didn’t know what was going on. It was where Magnepan marketing manager Wendell Diller was hosting the demo event, and it was packed.

Luckily, I had been in the room when Diller gave his introduction to the company’s new flagship magnetic-planar loudspeakers, and understood why the 20-plus people inside the room where slowly shuffling all around it with slightly confused looks on their faces. You see, Diller was having people move to different areas of the room while music was playing to impress upon them the four-panel Magnepan 30.7s dynamic abilities, which I have to say – having shuffled around with the best of them during the demo – was impressive indeed, but the lack of chairs did cause consternation for some attending the event – audiophiles like to sit down, not move, and close their eyes. The big panels were evenly pressurizing the room, and while there was still a sweet spot to experience the speakers’ larger-than-life imaging abilities, not a few attendees steadfastly returned to said sweet spot like they expected to be without a spot to stand when the music stopped. To be honest, having spent hundreds of hours at hifi demo events around the world over the last few years, there really wasn’t a bad spot in the room for listening.

Timbre, and tone from wood-bodied string instruments was tonally rich, percussion, and bass impact had density, (but perhaps not the slam many are used to from traditional-driver speakers) midrange juice was there, as were clear vocal inflections, upper-register air, detailed decay on piano, and woodwinds too – wherever you were standing in the room, even way in the back corner directly behind the 30.7s, it sounded pretty damn good. An inspiring feat in many ways, because I’d be hard pressed to name another transducer manufacturer that I could say the same about. That said, I don’t know anybody who listens to their sound system while standing behind their speakers, but since walking all around the room was an exercise to showcase dynamic abilities, it was a success in my opinion. Diller’s point did not seem to be lost on those attending this first of three demo sessions scheduled for last Saturday either. There were a lot of head nods, smiles, and raised eyebrows exchanged throughout as those in attendance came to understand what the big magnetic-planar panels were capable of.

In particular the 30.7s were capable of speed, and resolution. Attack on notes, and transients was lightning-quick, crystal clear, with no smearing, real point-source coherence, and a liquidity to the midrange that put in me mind of another box-less design: The Quad ESL-57 electrostatic speaker, albeit with much more bottom end from these huge Maggies. Now, this is what in essence sets Magnepans apart from most other transducer designs out there: There is no cabinet, no cabinet resonance, or cabinet restrictions for air volume. They’re designed around an ultra-lightweight membrane driver that acts as a dipole line source which gives them their “dynamic” or uniform power-handling capability to so evenly pressurize a room.

At about four-feet wide for both panels (there are four panels in total, two-per-channel), and six-and-a-half feet high, the 30.7s are big, but they are only a couple inches wide at best, which gives some flexibility in room placement. That said, it’s my understanding they they can be quite picky with location, so be forewarned that they are not the easy-setup Messiahs of transducers. They will be just as fussy as most other designs. But fussy or not, they produce an addictive sound, with realism, and seamless transitions across the frequency band that could get you low-whistling if you’re prone to such displays. Like electrostatics, they seem far less fanatical about amplification (Class A, Class A/B, or Class D) than many other designs, and as long as the voltage rail has plenty of current, and the amplifier’s output is of sufficient wattage (Kivritsky recommends at least 250 watts), then the 30.7s should be able to make beautiful music for the end user. MSRP is $30,640 USD/$40,000 CAN. For ordering, and more information contact Igor Kivritsky at Hifi Centre: igor@hificentre.com

Absofoxinglutely: The Delights of A Radio Fox Hunt | RADIO SCHMALTZ

RALEIGH, NC (PTA) — I usually wake up early. I’ve heard that habitual early-risers tend to be optimists. This makes some sort of sense to me because this habit shows that we’re willing to leave […]

Retirement seems to suit VPI‘s Harry Weisfeld to a “T.” Actually, lets have some fun, and say it suits Harry to a “TT.”   It seems the scion of the venerable turntable manufacturer out of […]