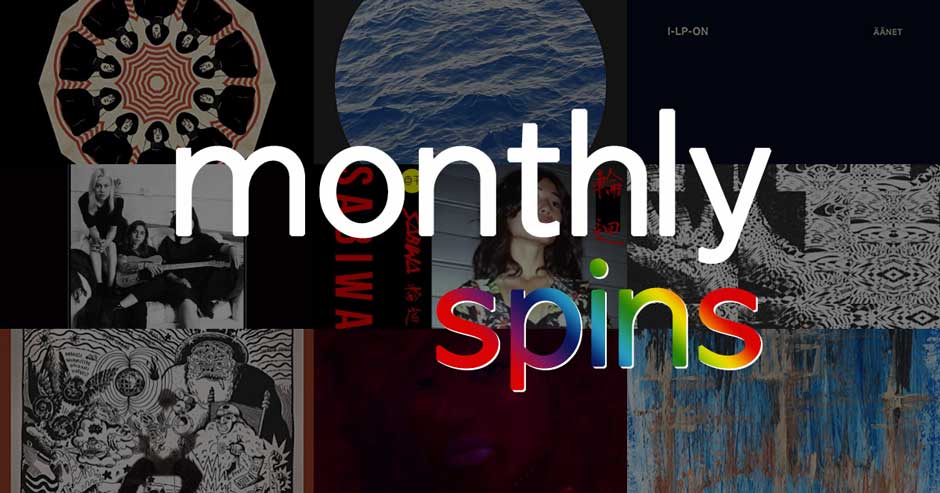 Released a couple of weeks ago this self-titled album is originally from 2000 and finds a fully-formed Athens, Georgia band that should have had a wider following given the fact that they pretty much define everything that is good about indie rock. A little Modern Lovers, a little American Analog Set. The leader and singer for The Glands is one Ross Shapiro, who passed away in 2016 from lung cancer. The surviving bandmates and fans decided a good tribute to the life of Shapiro would be to sift through the many years of Glands material and to rerelease this self-titled original offering as well as an album of 23 related songs released as Double Coda.

Certainly way up there with the discovery of the month. Cee Haines aka Chaines has probably found a place on my Best Albums of 2018 list (which will arrive shortly), If you are a Mica Levi, Scott Walker or Ghédalia Tazartès fan then you might find this recording pleasantly innovative and enrapturing. You could call these abstract torch songs, via Eraserhead. Haines has collaborated on this release, and over the years with the London Contemporary Orchestra and has performed and been commissioned by Roundhouse, Union Chapel, and Tate Modern, to name a few. Other major contributions come from Oliver Coates and Mary Stark, who add their styles to what is nothing less than one of the most beautiful and enchanting albums I’ve heard all year.

Sean Canty and Miles Whittaker aka Demdike Stare have been at this deconstruction project for a while now and left a trail of dissolute dance-floor tears as they take things apart and forget how to put them back together again. Splinters of garage, grime, jungle, ambient, industrial, noise soundscapes samples that have been stretched and shattered into new shapes. I’d like to keep it simple now and quote my good friend Michael when he said “This record kicked my ass!” And don’t EVEN try to dance to this stuff because you’ll end up hurting yourself.

File Under: If this is hip hop then why is it so rarely I hear it?

Although its permutations are vast and it’s popular effect on the culture dominant, hip hop rarely surprises, let alone moves me. Hip hop evolved out of disco and funk, became popular when it started sampling hardcore and metal riffs. The Golden Age before you had to be rich enough to sample other artist’s work. A humble beginning that soon turned political and was telling stories of what life was like on the Black Planet. So here is Ambrose Akinmusire, bringing chamber music and spoken word, jazz and other genres into the hip hop universe. I never imagined it could sound like this and I’m happy that it has been done.

Colin Self is a composer and choreographer who splits his time between Berlin and NY. He’s a very productive and passionate artist who enjoys creating new venues and forms of expression. In 2012 he co-founded the performance collective Chez Deep. His first album, Elation became part of a performance piece. He has collaborated with dozens of people, including Holly Herndon and Amnesia Scanner. He started the vocal/choir workshop Choir, which is an organization open to all comers. What you will hear on Siblings is a wonderful amalgamation of sonic worlds from choral, club, noise, string quartet, folk and techno. Somehow it all works.

Fred Sandoval is the person behind this sprawling Manila-based project called Auspicious Family. He is a part Chinese, part Filipino and a sound and visual artist with two previous releases under this name. Sandoval says that Manila is full of noise, from generators, motorbikes, people on the street and sirens blaring. He uses field recordings in his mixes to great and haunting effect. This is a memorable and astounding effort and comes from a virtual wasteland of original ideas or any sense of commonality. He says of the current state of the Manila music scene: “I believe that there is a prevailing aversion in individuality and the unfamiliar in Filipino culture from centuries of indoctrination. This I think has also resulted in the loss and revision of out own history.”

I’ve honestly never heard much modern electronic and experimental music from Taiwan so it comes with little context or history. The album is very of the now when it comes to electronic DJ affirmations. Here subject here is reincarnation. She says of the album: “Its about the circle of life. With this album I left my previous form to transform in to something
new. It’s like jumping into the void and not knowing what will be next.” Well said, and a lovely piece of music.

They’ve shared stages and record labels and generally fit into a folk-like singer-songwriter vibe so it wasn’t a stretch that Julien Baker, Phoebo Bridgers and Lucy Dacus decided to put out this Ep together using the sly moniker of boy genius. They all met together in LA to record the record in just four days. The only thing I disliked about this is that it is only 27 minutes long, way too short for such a talented group.

Lipo Vaisanen, is one half of Pan Sonic, a two decade old electronic outfit that has produced some of the most minimal and provocative music within the liminal guise of electronic music. The album is dedicated to Mika Vaino (1963-2017), Vaisanen’s collaborator, who died suddenly last year. Almost an epitaph of sorts, AANET stays within the industrial, ambient, avant-garde realms. They really were a thing onto themselves when they produced music together, singular and like a moon orbiting way out there, gathering energy from the home planet but remaining unto itself a unique celestial body.

I’ve followed her short career and Sligter is as talented and uncompromising as it gets. I want to include a quotation from Noel Gardner’s long review from the Quietus because I think that it gets succinctly at a truth about this artist: “Before hearing this album, I’d bracketed Sligter as a frustratingly marginal artist – frustrating in that her music, somewhere between psychedelic folk and Laurel Canyon, was among the richest and most moving of its kind, but with no apparent prospect of this being recognised by the audience it deserved.” Such is the world we live in that such talent remains at the fringes, and here on Polycrises.yes! we have nothing less than an epic focus on the probable dissolution and how this half-Norwegian, half-Dutch artist, who spends her time between Oslo and Berlin feels about what appears to be a slow-motion destruction from within of this once promising idea of European union. All this and a new singing style very much indebted to Scott Walker.

She has a few things up on bandcamp but otherwise the only thing I know about this musician is that she is half-dutch, half-Welsh, who recently relocated to rural Camarthenshire in Wales to work on and finish her new recording. She lived in a caravan parked outside a medieval mansion her friend was house sitting. She sits comfortably within that very French pop tradition of the late 60’s and early 70’s, and is slightly eccentric, to say the least.

File Under: 48 seconds long and it should have been 20 minutes

File Under: simple and lovely

File Under: new album from these two improvisers

File Under: drummer be good

File Under: One of greatest opening sequences in film history. The camera work and long shots are astounding.

A lot of rock this month, in various forms. I have to admit that finding new music each month has been something of a relief, given the relentless onslaught of obfuscation and horror in the news, […]

I guess you could call my quest for new music an obsession. I’ve had it since I was ten and often feel transported outside of myself by certain albums. It is a never ending quest […]

The in-between month with a steady bunch of tasty releases. I’m hearing all these Trout Mask Replica influences and this is a welcome development. Perhaps we’ll agree, or maybe you’ll find no sense to any […]