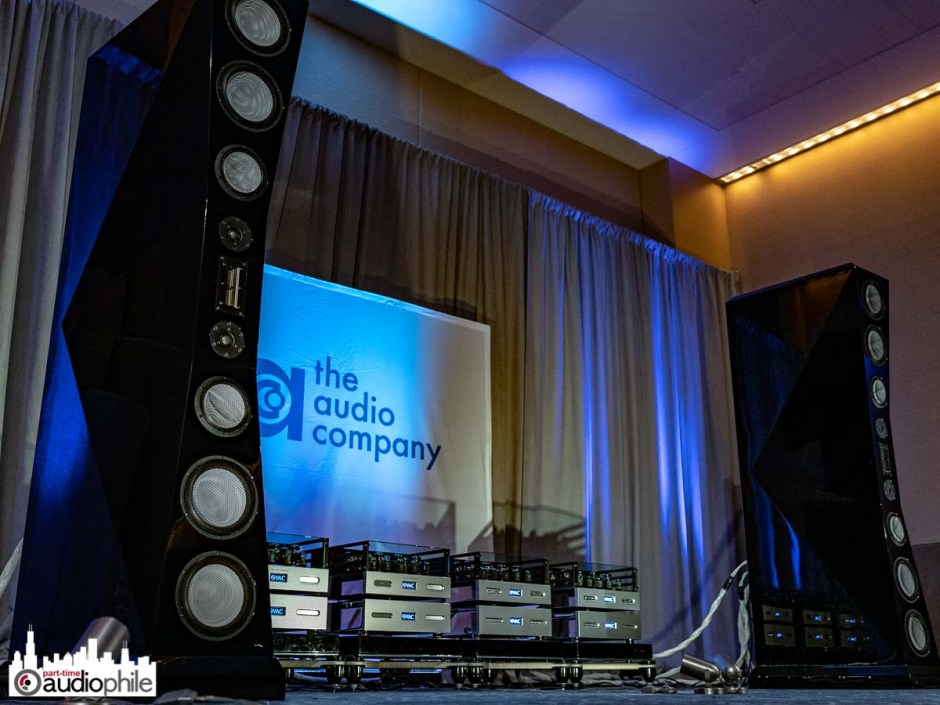 Occasionally, you get lucky. Like falling into step with vinyl evangelist Michael Fremer as he’s on his way to a do an exploration of some “interesting recordings” on a mega-system. Like many of you, I’ve known of Mr. Fremer for my entire “career” in high-end audio, but it’s been a pleasure to actually make a friend of him — and that (more or less) started several years ago at AXPONA. He’s sneaky, clever, disarming, charming, funny and can pull stories out of his suit jacket like and Audio Anansi. Seriously. The man is an encylopedia of odd facts and odder tales.

Much to my good fortune, it turned out that The Audio Company had asked for a reprise, apparently, on their highly successful mini-event from the Florida show. Huge speakers from Von Schweickert. An acre of glowing glass from VAC. A wall of Estoeric electronics and a massive turntable from TechDAS. And Michael Fremer’s curated set of LPs.

First up was a test-pressing of a recording done by Rene LeFlamme of Nagra Audio of “Mars: Bringer of War” from Holst. Not an orchestra, just a brass quintet and organ, and trust me, that was full. Next followed one a pressing of “Live at the Village Vanguard” even more rare (and expensive) than the sold-out run from MoFi. And disc after disc followed.

This was an incredible listening experience. Wall-to-wall sound, with epic percussion, delicacy and deftness, and an eerie ease with the recreation of space. This is why we mere mortals come to audio shows, folks — so that we can, if only for a moment, dance with gods.

Tip of the hat, once again, to The Audio Company and the team at VSA and VAC for once again pulling together some of the best-in-show sound on display at AXPONA. Just outstanding.

I kinda let the cat out of the bag with the pre-show teaser, but you have to admit, pairing 110dB horn speakers with kilowatt Class-D amplification is something of a head-scratcher. Seriously. Who does that? […]

Kharma and Constellation Audio teamed up on a pair of rooms at AXPONA, and if you were a fan of hi-fi sound, they would have been like manna from heaven, weaving webs of light and space […]