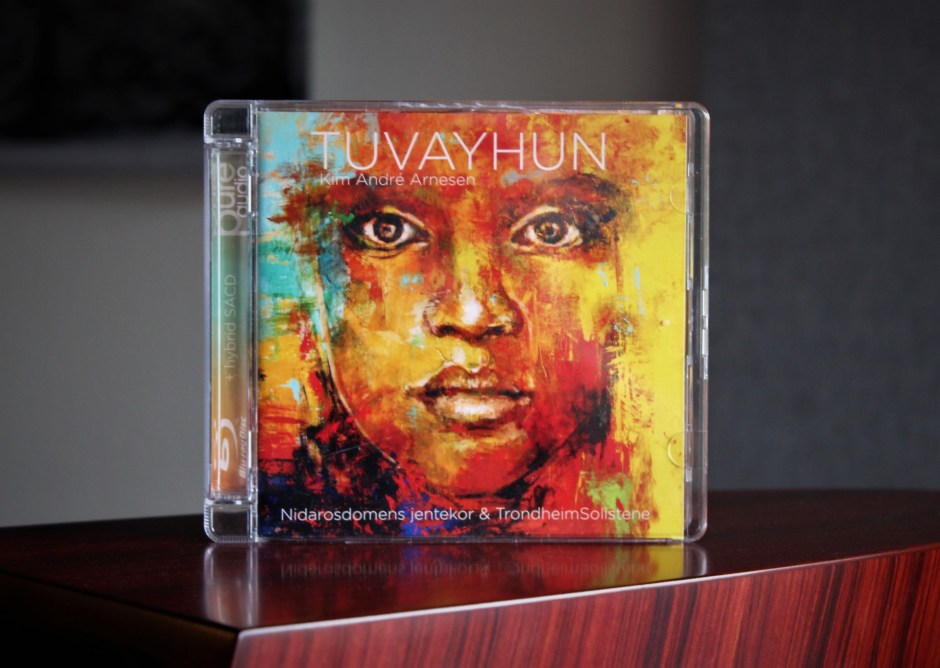 I’ve talked about chameleon recordings before, ones that sound completely different on the second or third listen, and how I sometimes wonder if someone sneaks into my house at night and swaps all my new CDs. There isn’t a big mystery about music like this; sometimes it’s just layers of meaning that slowly reveal themselves on each run-through. When I first heard Tuvayhun, the latest recording from 2L in Norway, it sounded like something completely different than it does now, perhaps more so than any recording in recent memory. That’s why I’ve been obsessed with this recording more than most 2Ls.

Tuvayhun, subtitled Beatitudes for a Wounded World, operates on the serene notion that we shouldn’t be consumed with the “cracks” in our troubled and unstable world when there’s so much beauty at its core. It’s an inspirational work that focuses on blessings, but seems to circumvent organized religion through the integration of both sacred texts and modern poetry. The music is written by Kim Andre Arnesen, with lyrics by Charles Anthony Silvestri, and that suggests a structure like a stage musical, which it strongly resembles. But on that first listen, it sounded like a summary of everything 2L Recordings has done–and done well–over the last few years.

I’m talking, of course, of church choirs and sacred hymns, the kind recorded in spacious churches using the latest recording technologies, and I’m talking about folklore and history and world music and, finally, the TrondheimSolistene, the small Norwegian orchestra that first introduced me to 2L Recordings. That first listen to Tuvayhun? Well, it sounded almost like a sampler disc, not unlike last year’s 2L MQA-CD. But it’s not. Not even close.

The scope of Tuvayhun expands and contracts like any stage production, with a revolving cast of vocalists from all over the world, a sweeping and romantic score for TrondheimSolistene, and a few exotic musical solos from harpist Ruth Potter, percussionist Hans-Kristian Kjos Sorensen and many more. The songs themselves are memorable–“Forty Days and Forty Nights” “Rachel’s Song” and others have lyrics and melodies that will stick in your mind for days. This is no dreary recitation of hymns, but rather real humans discussing their inspirations.

“But I wonder/will the God I see/Look at all like me?” Tuvayhun isn’t as secular as I’ve implied, but the musical scope here is far beyond something you’d hear in an ordinary church, or even a Broadway stage. This is haunting yet accessible music, strong on melodies that sound oddly familiar, richly varies in its approach. It’s even cinematic to the point where I want to see Tuvayhun on film, boastful of its timeless qualities, even though I don’t like musicals at all unless I love the music first and foremost. It’s obvious, however, that I love the poignancy as well as the big questions asked.

But what’s strange about this recording is I still don’t believe I have a handle on it, and I think it’s going to keep evolving in size and shape every time I listen to it. And I will keep listening to Tuvayhun, over and over. It’s designed to make you feel better, and to give you some hope, and I think it worked.

When I attended High End in Munich in 2019, the big Living Voice room really stood out for me. First of all, it was like a forest in there, with plants everywhere and a huge […]

Gretje Angell, In Any Key | The Vinyl Anachronist

Gretje Angell’s new album, In Any Key, makes it two days in a row of fabulous woman singers–including, of course, Lauren Henderson’s warm and beautiful Alma Oscura. Both women have that seductive quality in their […]