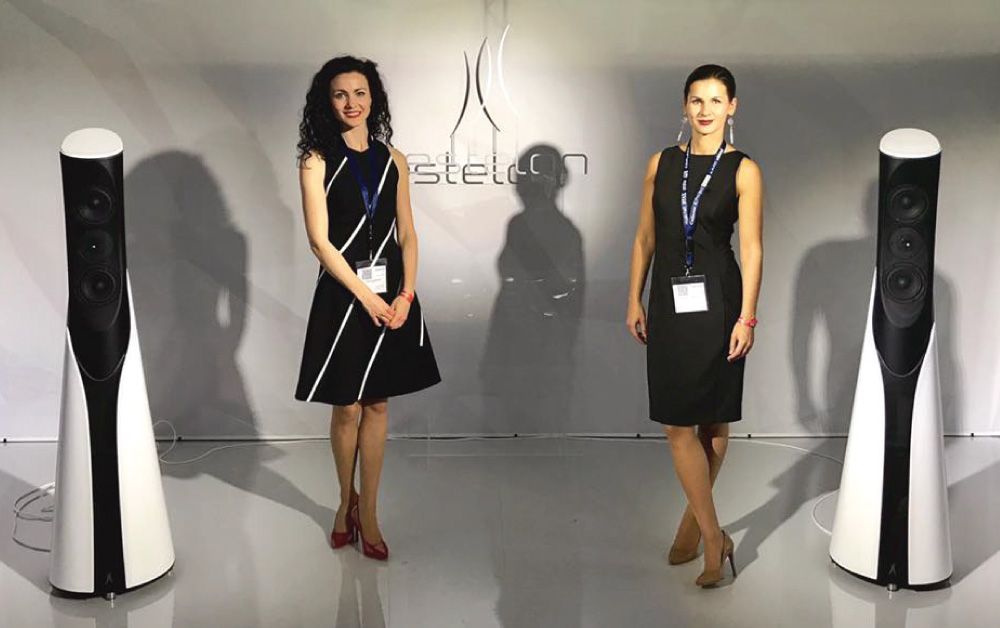 Estelon has been on a hot streak for years and 2017 was no exception, they introduced a new, all in one speaker system called the Lynx. The Lynx offers an M-T-M configuration with two 5″ midrange and a 1″ tweeter enhanced by a 10″ woofer, all wrapped under a gorgeous, sci-fi cabinet. During the press conference there was one point that intrigued me the most, the system does not pack an amplifier. I had to ask Andrus Aaslaid, chief technology officer of Estelon for additional details. This is his “down to earth” explanation:

Estelon LYNX speakers are essentially a marriage of all the best technology in the field of digital audio we could imagine. The core of the audio is HQPlayer from Signalyst that works as a DSD rendering engine, converting everything to a DSD64 stream. An Integrated Roon streaming player acts as a user interface for playback from NAS or Tidal streaming service.
The final frontier of the Estelon Intelligent Audio technology is its powerdac – or the absence of it, actually. Estelon LYNX speakers have the DSD stream driving speaker elements directly. As one of the fundamental features of DSD bitstream is its capability to have analog signal reconstructed by simple analog low-pass filtering, Lynxes can get away with no signal processing at the amplification stage whatsoever.
The phase and amplitude accuracy of DSD is comparable to best analog recordings, while the
digital domain allows the lossless transport of the data. At any point, by simply re- clocking the bitstream to DSD bitrate, one will get a mesmerizingly close rendering of the original recording (if it started its life as DSD, of course). The audio data transport in Estelon LYNX takes place wirelessly, over the 2Ghz and 5Ghz Wi- Fi network while a dedicated radio chipset constantly aligns the phase and timing of the DSD clock pulses on all the speakers connected to system. In Estelon Intelligent Audio, reclocking of the DSD data is done with sub-picosecond jitter precision, while the synchronization between the channels over the air is approaching the sub-microsecond domain. This signal is then run through a precision FET driver bridge connected directly to the speaker’s analog crossover. It is difficult to imagine a shorter and more lossless signal path in the analog or digital world of audio. This approach to digital audio is the most suited to the hardcore audiophile there can be, and the sound you get this way is in some sense even closer to analog than analog itself.

Listening to the Lynx I could immediately perceive the typical Estelon house sound, a detailed and refined presentation with excellent imaging and natural timbre. The Estonian company remains a pinnacle of innovation and aesthetics.

Living in Estonia, designer Alfred Vassilkov and business-partner Alissa Vassilkova of Estelon don’t do a lot of North American shows. If you haven’t met them, they’re a charming story, this father-daughter pair, and a delightful exemplar […]

High End 2017: Munich’s massive systems and what they can mean

I felt small. I’m six-foot-two-inches tall, but making your way around The High End Show at the colossal MOC in Munich can be a humbling experience in spatial ratios. While some system set ups were of […]

I first ran across Estelon at RMAF last year, and I remember being instantly smitten. And not just by the sound. With three Accuton drivers, the $64,000 X Diamond is lightning fast, with detail retrieval […]