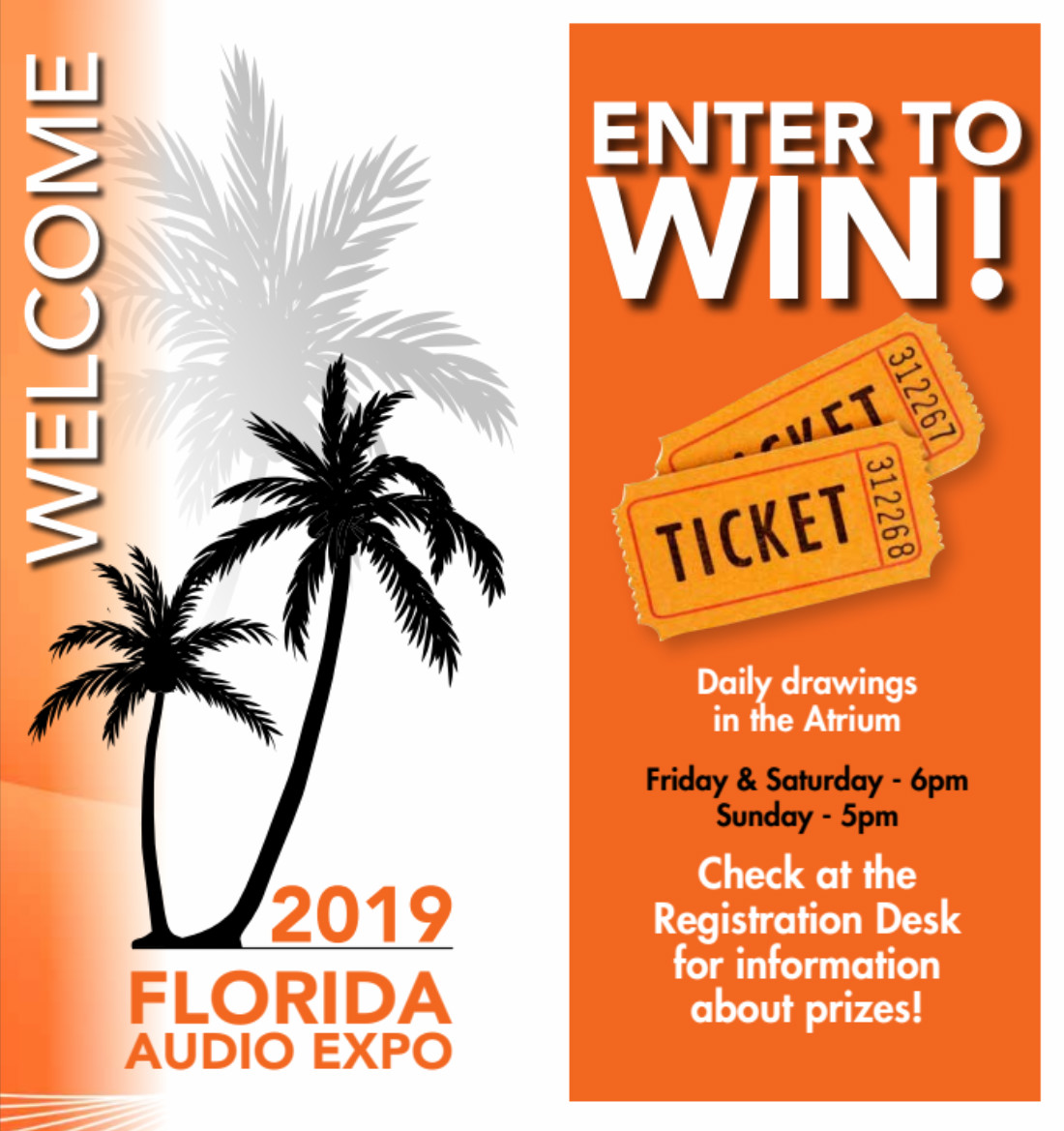 To wrap things up, I think the major question of the show was answered. If the Florida Audio Expo was indeed an experiment, I think the results have given us a proof of concept. Attendance at the show was solid from hour-one on Friday through Sunday close. Exhibitors brought their A-game. The efforts from local dealers and manufacturers afar combined to offer up an especially engaging in-room experience. In some ways, all the factors of what make a great sounding and informative listening session were ticked. Show-goers had the time and space to take in an unusually longer listen than at the bigger shows. Viva la regional shows!

The Best of The Show

In many ways, writing this feels like being a judge in the Miss Universe pageant…They’re all fine.
But as my experience grows and my coverage broadens, stand-out rooms do indeed begin to… stand out. 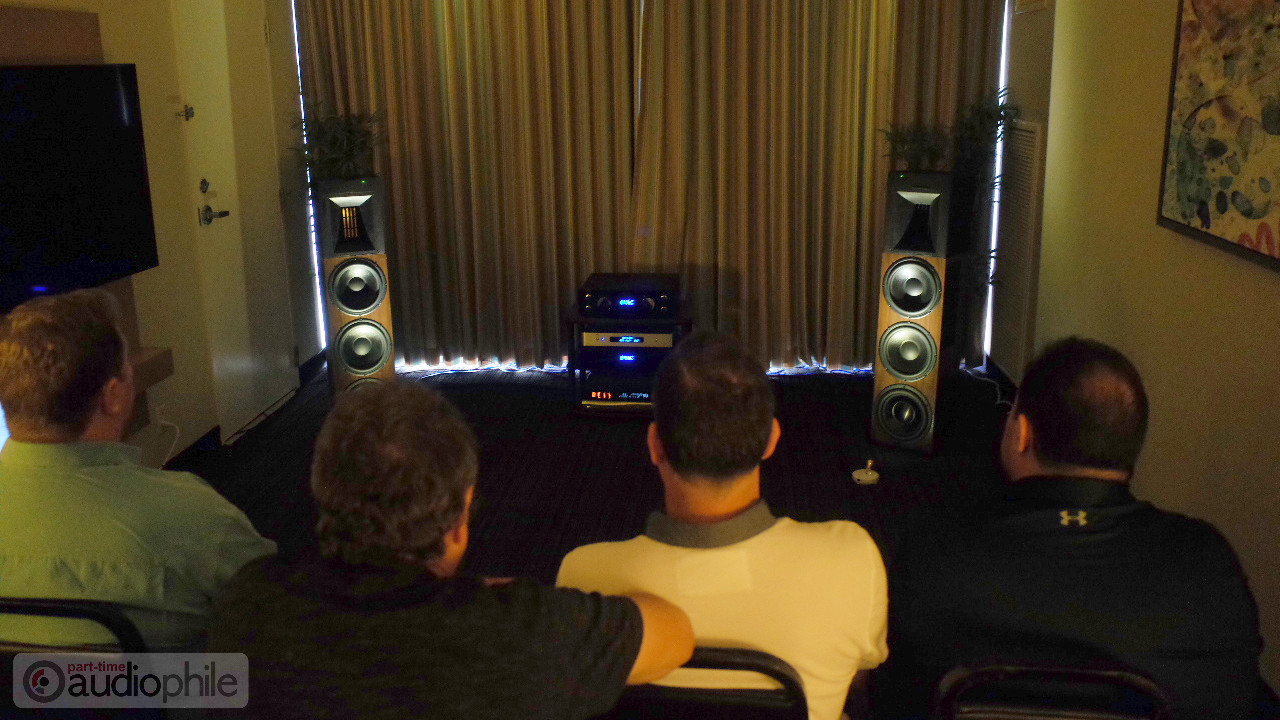 Ammar Jadusingh (founder of Soundfield Audio) has really done away with convention in designing his active tower loudspeaker, the Soundfield Audio CTA1. Some details: three-channel (250w x2 and 100w x 1) Hypex NCore power, three front mounted ten-inch woofers — the upper two are loaded in a “cardioid enclosure”, an 11″ high x 9″ wide planar magnetic horn mid/tweeter, a rear firing 1″ neodymium compression horn (6”x6”) firing into a geodesic diffuser mounted on the rear inside wall of the speaker cabinet, fully-active and DSP processing with customizable presets. Without pictures, what would you have imagined? 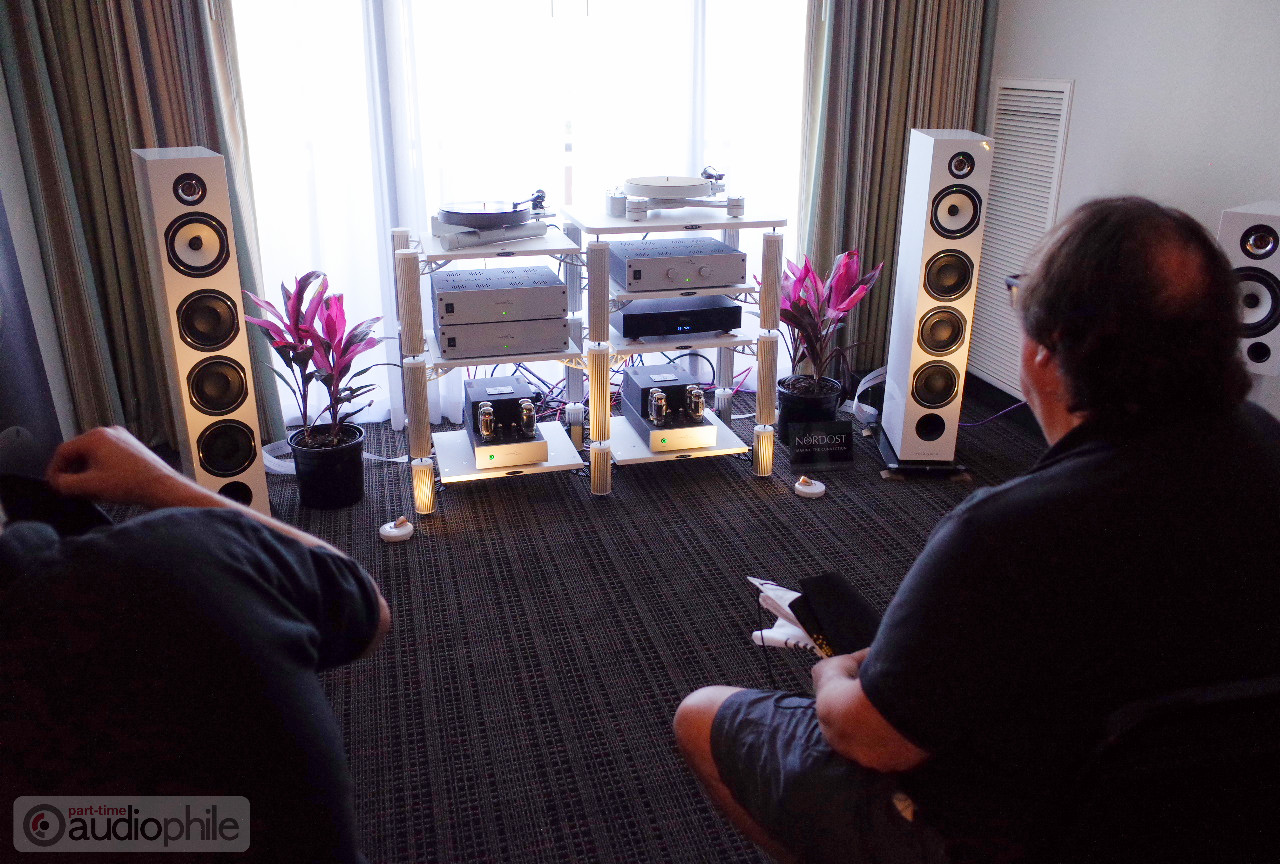 The bulk of the value in this room was carried by Tsakiridis Devices, a Greek company founded in the early 1980s and known for producing fantastically valued and acclaimed tube electronics. I could point to a whole rack of electronic components where most were under $1,500 USD 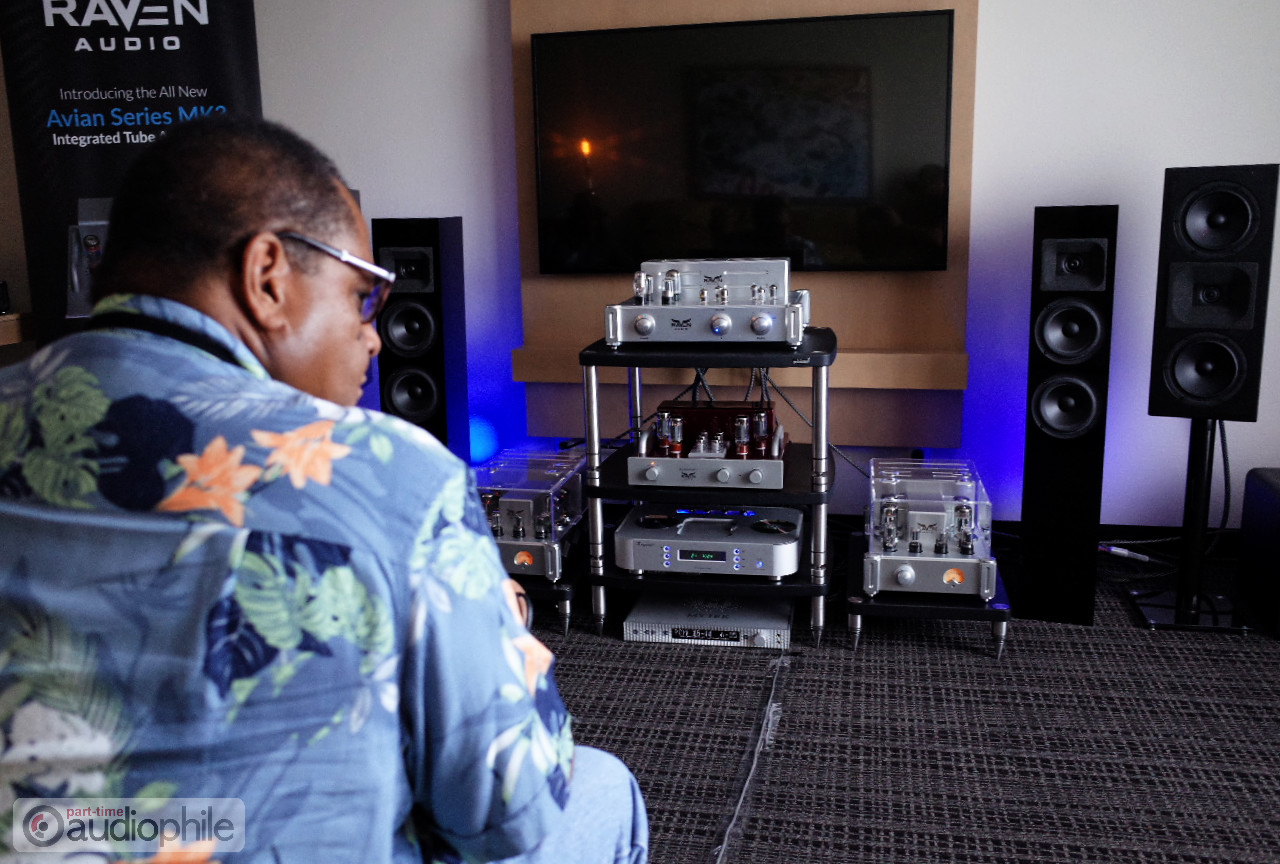 Best Debut Product: Raven Audio and their foray into loudspeakers

Never before had Raven Audio shown with speakers, and yet here were a pair of towers, and a pair of MTM monitors. Stepping into a new product category isn’t supposed look — or sound — this easy. Yet, they’ve done it. Call it beginners luck, Raven Audio speakers are already my “rookie-of-the-year” component, and 2019 has ten more months of shows left. 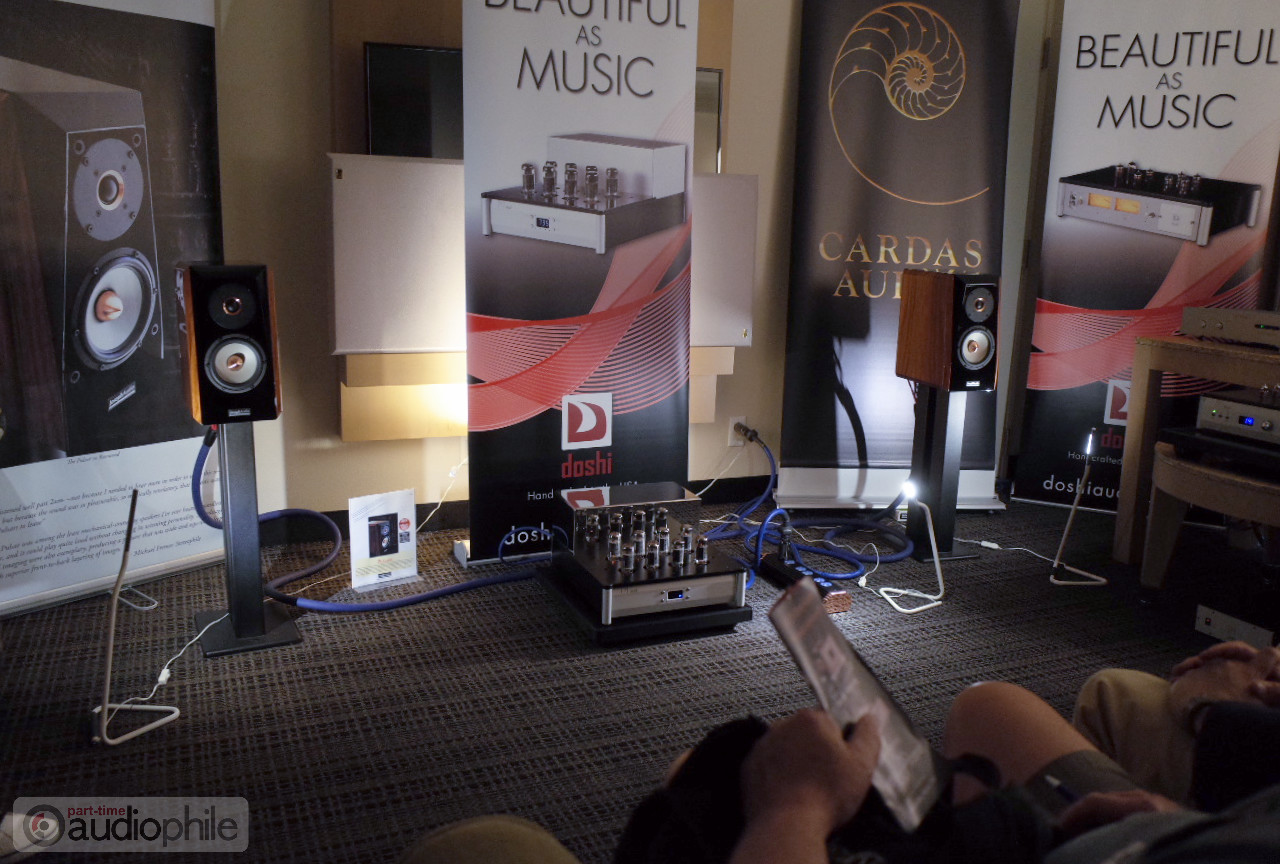 Consider this a tie for best sound (against Merrill and Muraudio) that had to be broken by size. Though if I were given the option to own either systems, I would likely just flip a coin. We often talk about best-in-show systems or components. Seldom do we ever distill our show going experience down to a best-in-show moment. Playing Toots Thielemans’ live version of his Urban Cowboy Theme was revelatory, as far as the Pulsars are concerned. Magic poured out of them.

When Nick Doshi fired up the Studer tape machine and let the songs flow, nothing else in the world felt more right coming through speakers. This was a hallmark moment for me that I will carry on for many years. I’ll always remember that sound, that experience, and how moving the music was during such a high-resolution performance. 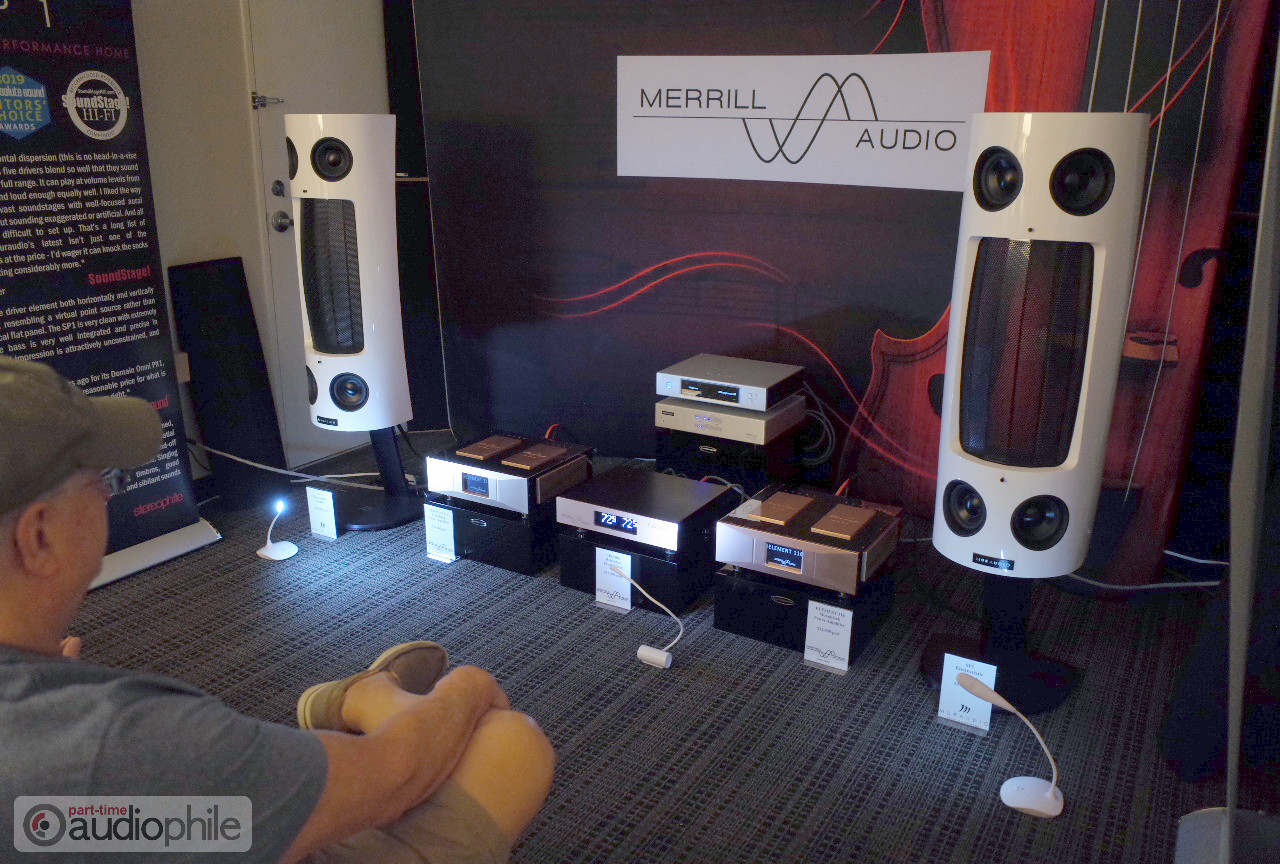 I’m hearing this music from outside the room, and I’m sprinting through the door frantically looking for a front row seat. I’m in disbelief that Merrill Wettasinghe has chosen Def Leopard’s Pour Some Sugar On Me, but even more so that this dumb song — which I thought was once held together with spit and chicken wire — now sounds fresh, refined, and scaled up like never before. Before me is the most powerful wall of clean force and control. Merrill has the volume cranked and I’m not the only one in the room with mouth agape. I’m in love. The presentation is beguiling in it’s realism.

With the Merrill ELEMENT 116s and Muraudio SP1s, while dialing through numerous tracks and genres it becomes clear this pairing is as strong in synergy, soul, dynamics, and detail (SSDD) as anything I’ve heard at the show. I’ve heard the SP1s before and they were stunning, but this is an awakening.

Nobody exemplifies ultra-high-end audio like these guys do. Their perfect in every aspect of the execution, even down to the “how-to-be” bits. If ever I had to try to explain to someone out in the real world what this idea of audiophilia can ultimately lead to, I’d start and end here.

For this show, the big news was the introduction of the newest Von Schweikert Audio Ultra 55 loudspeakers. Similar to the Ultra 11’s and Ultra 9’s we covered at Capital Audiofest, these are similar in design philosophy, but with a “smaller” footprint and price tag. I say “smaller” because these are still ultra-high-end audio products we are talking about. They are built to ultra-high-end standards and carry with it the appropriate price tags.

Welcome to the Best Integrated Amplifiers section of the Part-Time Audiophile Buyers Guide for Summer 2022. The Guide is more than “We heartily endorse this [fill in the blank].” This collection represents our enthusiasm. Every product […]

LOS ANGELES (PTA) — I met with Jim Whithorne of Butcher Block Acoustics on Sunday afternoon, just before the wrap of the show. During my visit, Mr. Whithorne gave me a guided tour through their […]