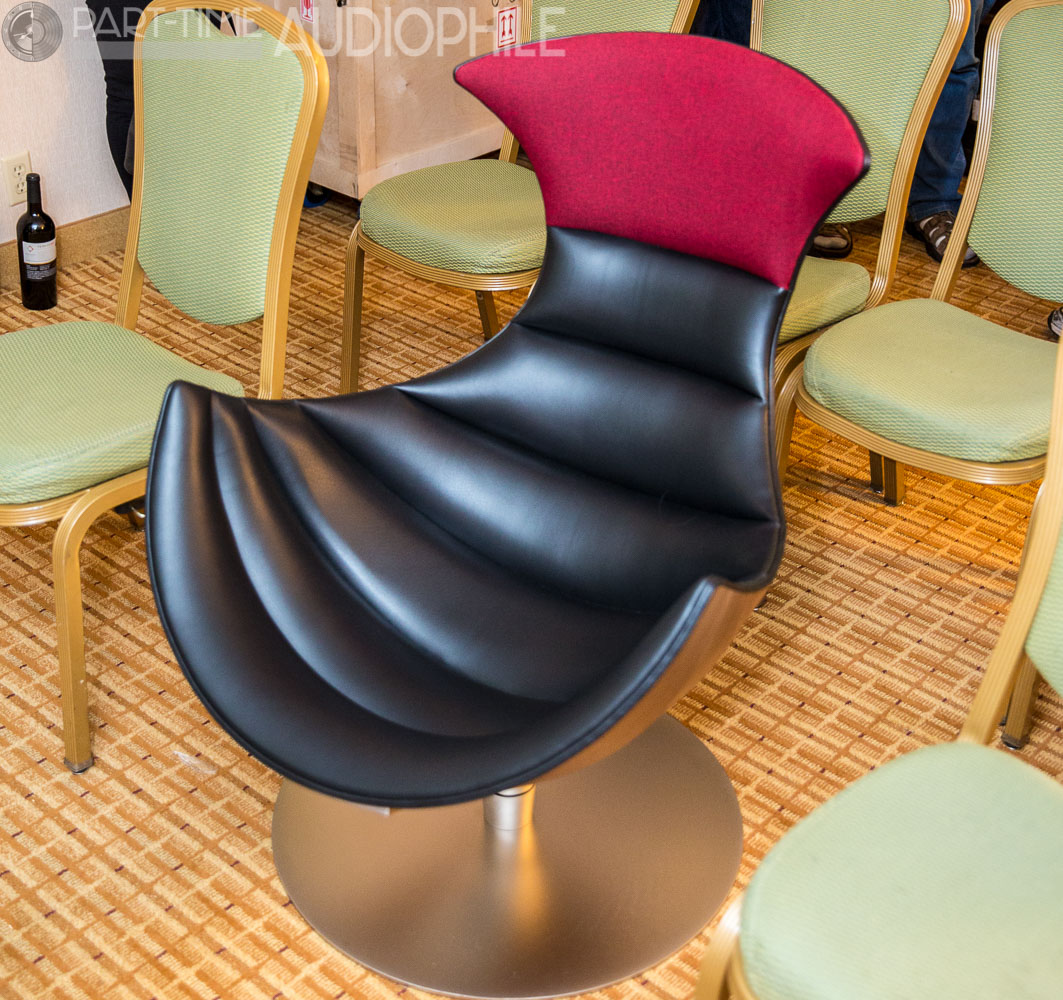 A visit with Benno and Michael of GamuT Audio is mandatory. Why? Three reasons. First, they’re great guys and very easy to be around. Second, they’re very blonde. Third, the sound they manage to evoke from their setups is always some of the very best I’m likely to hear.

That is truth and I’m testifying, brother. Can I get an “amen”?

Their “schtick”, as some would call it, is the sound — warm, non-fatiguing, wildly musical. Here at RMAF this year, we got ourselves a double helping of that, too.

The first room featured Benno and a pair of the monster RS7 ($39,990/pair), a tremendous 3-way floor-standing speaker. It’s size is a little deceiving — it’s reasonably tall, at just over 4′, but it’s unusually deep at almost 2′. That cross-sectional shape, a long “boat-tail”, is very sexy, and aside from the whole no-two-walls-are-parallel, it gives the shape of the speaker a very elegant, SCAN Design sort of look — modern, natural, IKEA-plus-50. In other words, it’s furniture, or if you prefer, functional art. The speakers are available in a variety of finishes, but none of them will look like something other than wood. The sidewalls are textured the cabinet is fashioned out of 21 different layers of differing kinds of wood. The result? An instrument, and yes, it’s tuned like one too — don’t expect a fully-inert ultra-mod robotic thing from these guys.

The driver complement is also unusual — the double-ring radiator tweeter is probably familiar, but the sliced-paper mid is less so. The woofers? Oddest of all — they’re wood fiber, with a wooden dust cap, dyed (or otherwise finished) to match the rest of the cabinet. Here, that was a rich cranberry red, but I’ve seen in au naturel (my personal favorite) and in a subtle black.

The speakers can dip deeply into the 20Hz region, probably not an ideal match for such a small room, but there were no apologies necessary nor on offer — the sound was fulsome, lively, dynamic, delicate … in short, it was an effort — as usual — to not start babbling “take my money!” My great friend Jeff Dorgay at TONEAudio has reviewed them, and favorably, so I’ll simply offer that they’re on my short list for retirement speakers.

The hidden star, here — I want to submit — may well be the amplifier, however. I’ve seen this amp, the M250i ($12,990 each), in several iterations/variations, and each time I’ve been impressed by what the room has been putting out — regardless of the speaker playing. This has happened enough times that I’m now beyond suspicious — I have become convinced that the amps are magical. I’d love to get some extended time with them! 250 watts into 8Ω and doubling into 4Ω … well, that should be enough for just about anything … and I’m probably going to need to rob a college fund at some point here. Hmmm.

But with all of that lusciousness creating dense sonic fabrics to fall into, what caused the most interest — and lines — was the Lobster.

More properly, the Lobster Chair. This iconic cradle is all about that Scandinavian look — sculpted, natural, and minimalist. It’s also $5,590. What’s different with this one, however, is the head-rest — the fabric of the headliner is acoustically dampening, which means an increase in acoustic focus. It’s a nifty effect — settling in, music up, and the improvement to clarity and tone is immediately obvious. The chair is not adjustable, unfortunately, so you either fit or you don’t — I recommend a trial, if you can arrange it, prior to bringing one home. That said, I have no doubt it’ll be the most interesting-looking (and sought after) seat in your home, regardless. It’s gorgeous.

In the other GamuT room down the hall, I found Michael and a whole lot of wine, being liberally shared. Shazam! Ahem. Anyway, in the front of the room, I was faced with a pair of RS3 stand-mount loudspeakers ($19,990). These speakers are essentially the middle part of the RS7; they’re a two way, with the sliced-paper woofer and dual-ring radiator tweet, with the real-wood 21-layer cabinet. I’m pretty sure these come with the stands (as in, they’re integrated), and at 46kg inclusive, they’re hardly lightweight — though, it would have taken exactly three notes to have realized this during playback. Small, maybe, but they play plenty big.

This second room also featured the stereo (but fully dual-mono) version of the mono block amps, the D200i ($13,990), but the same pre from the other room, the (also dual-mono) D3i ($8,290). Cabling and the analog front-end were the same across both rooms.

Which speaker you’d prefer depends more on your room size, in my opinion, but there’s something to the big speakers’ fulsome presentation that I find particularly attractive. This is a room, and a set of gear, that starts and ends with the descriptor “musical” — and that may be the best way to leave it.

One of my favorite stops on the tour, one of my first Best-In-Show contenders.

I’ve gotten so used to seeing and hearing a “certain something” from High Water Sound’s Jeff Catalano that it’s almost a shock to see him deviate from it. Stunned, actually. I mean, I never would […]

I got lucky. When I finally managed to swing by the Vandersteen/ARC room, it was nearly empty. Which means yours truly got some serious quality time in the sweet spot. The $50k Vandersteen Model 7 […]

I have a confession: I almost missed this one as I stumbled upon it after seeing Steven Stone in the hallway waiting to get in and someone said, “free breakfast!”.  Music to a journalist’s ears. […]