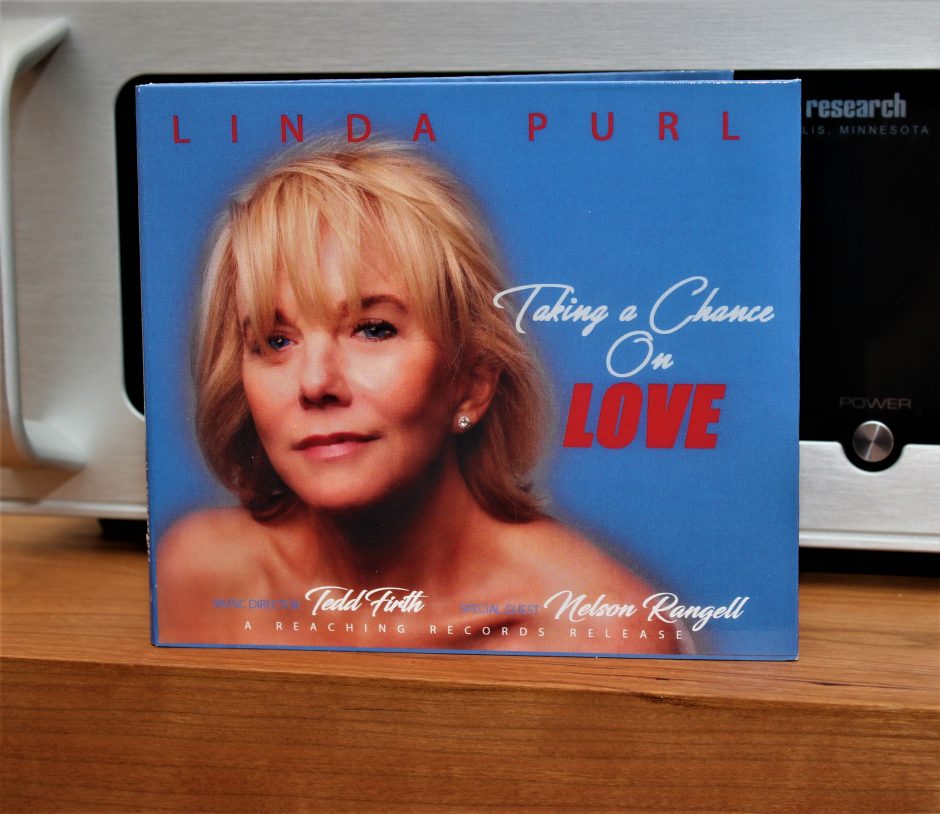 Just a few weeks ago I had to come clean about a former Hollywood crush, Gloria Reuben, when she released her surprisingly beautiful album For All We Know. Now I’m going much further into my crush history with Linda Purl‘s Taking a Chance on Love. Linda Purl was a TV star back in the seventies, when I was a teenager, and is probably known best for playing Richie Cunningham’s girlfriend on Happy Days. I thought she was adorable, so very girl-next-door, but I have to admit that it’s been so long since I’ve seen her face that I didn’t put two and two together when I received the CD in the mail. Linda Purl? That sounds familiar.

I had some trepidation about the Gloria Reuben album–I was hoping it wasn’t a vanity project, the kind we’ve seen all too often over the years. (A friend of mine still owns copies of albums from John Travolta and Eddie Murphy, and let’s just say they haven’t held up.) Gloria’s album astounded me because it was so original and exciting and well-executed. Linda Purl’s Taking a Chance on Love isn’t quite as shocking and intimate–her style is very much based in jazz chanteuse traditions–but man, she has a powerful and impressive voice that’s flawless and excellent. There’s a reason why she deserves to perform in a jazz club, surround by the best.

It’s unfair to talk about Linda Purl as if she suddenly decided to become a jazz singer. This is her fifth album, and she’s been performing at such venues as Birdland, Lincoln Center Jazz, Catalina Jazz Club and Tokyo’s Satin Doll. She’s been on Broadway as well, and she still appears on TV. (That part about not seeing her face for decades? I was wrong. She was Pam Halpert’s mom on The Office.) As with Gloria Reuben, I was so initially taken with the richness of her voice, the carefully honed professionalism, the difficult-to-master jazz intuitions that separates the good from the great, that I felt rather foolish for not knowing Linda Purl’s a widely respected jazz singer all over the world.

Linda Purl is also gifted at choosing the musicians around her–bassist David Finck, pianist Todd Firth and drummer Ray Marchica, with reed instruments played by Nelson Rangell. Where Gloria Reuben primarily shared the stage with one person, keyboardist Marty Ashby, Purl’s trio/quartet sounds much larger than it is, and I suspect that has a lot to do with her dynamic voice. This is where I should stop comparing Linda Purl to anyone else, because there’s one word, one feeling I get from Taking a Chance on Love–class. This is a beautiful, classy affair that can only come from someone who has lived the jazz life and understands all the deep layers of its history.

3D Jazz Trio, I Love to See You Smile | The Vinyl Anachronist

I Love to See You Smile is indeed another piano trio recording in a season obviously focused on jazz trios. But this one is different. Oh, you might think, I always say that this particular […]