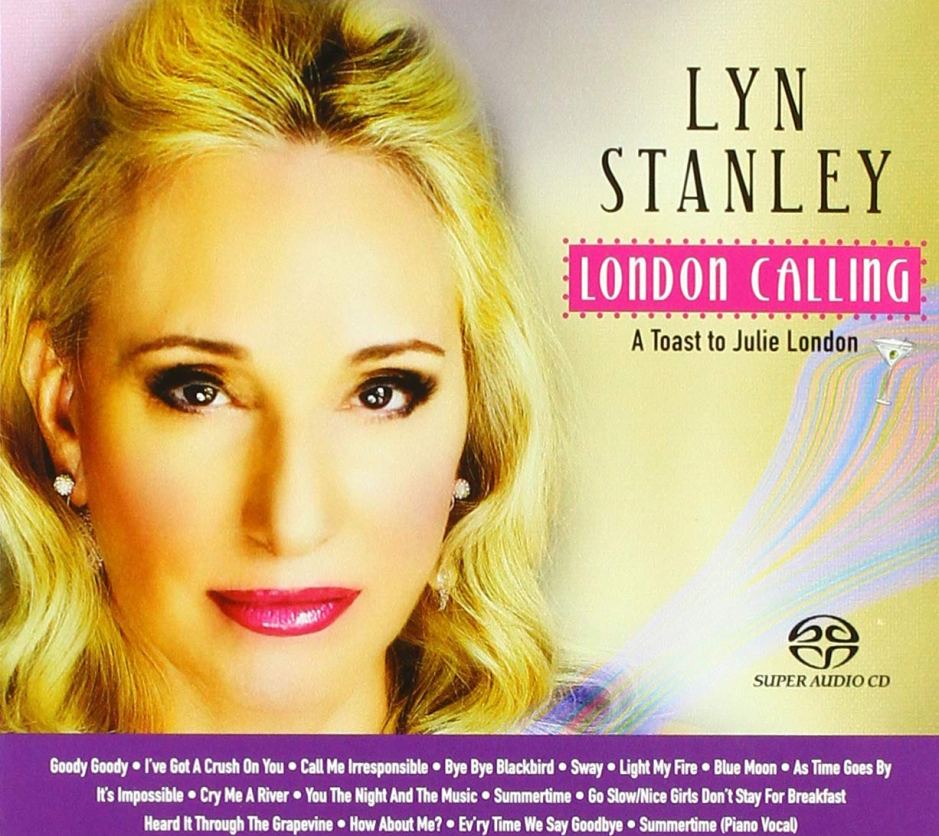 It seems like I’ve had Lyn Stanley‘s London Calling: A Toast to Julie London on my review pile forever, probably because I’ve known about this project since I reviewed The Moonlight Sessions, Vol. 2 for Positive Feedback in November of 2017.  (I also reviewed Vol. 1 on my blog back in August of 2017.) After I raved about that album and its sublime sound quality, Lyn emailed me to thank me and we started an email exchange that continues almost to this day. That review process was also prolonged since I listened to Moonlight first on a redbook CD, sent by publicist Jim Eigo, who probably didn’t know my audiophile connections at the time. After that, Lyn sent me the album on vinyl, then reel-to-reel, then another reel-to-reel. I found it fascinating to explore the album this way with Lyn’s constant involvement bringing a new depth to the review process.

After I was done with The Moonlight Sessions, Lyn immediately started talking about her next project–a tribute album to Julie London. I was in the middle of an obsession du jour concerning Julie London, especially after reviewing both of the Analogue Productions reissues of Julie Is Her Name, Vol. 2 and Latin in a Satin Mood. It sounded like an excellent idea to me. Lyn and I had become friends on Facebook at that point, and I witnessed the progress of the project thanks to her updates.

Then, one day, Jim Eigo sent me the redbook CD of London Calling. I listened to it, thought it was outstanding in every way, and commented on Facebook. Lyn replied within a few hours and thanked me, and when she found out I only had the redbook CD, she offered to send me the CD/SACD hybrid as well as the LP when it was finished. As of this writing the LP still hasn’t been released, so I’ll probably do a follow-up when it does. But I wanted to review what I have, the CD and the CD/SACD hybrid, because too much time has passed and I want everyone to know that Lyn Stanley has once again knocked it out of the park. In addition, I kept seeing Lyn walking around at High End 2019 in Munich. I didn’t flag her down because she always seemed to be in the middle of something very important, but her presence served as a reminder.

Lyn Stanley calls London Calling a “toast” rather than a mere tribute. “I chose to honor, not mimic, jazz stylist Julie London,” Lyn explains in the liner notes, pointing out the similarities between their jazz sensibilities. London was never fond of scatting or being too stylized in her delivery–her sultry voice was incredibly natural. She also sang the lyrics as if she wrote them and infused each syllable with meaning and emotion. Lyn Stanley does the same thing but she adds a couple of layers, most notably in the attention to arrangements and sound quality. Julie London cared about the same things as well, especially when you listen to her old albums and marvel at how good they still sound. But Lyn has always taken an extra step beyond other jazz singers. She wants the arrangements to be so unusual and so revisionist that they bring a new light to the song that never existed until now.

Her dedication to sound quality is also rare among singers. She is the antithesis of the singer who strolls into the studio with a chauffeur and a bottle of bubbly and knocks out a couple of takes before she heads home, trusting that the others will do their jobs. From her social media updates, it’s clear that Lyn has unusually high standards when it comes to sound quality–it seemed like she agonized over every detail and wouldn’t give up until she was completely satisfied with the results. I wonder what kind of hi-fi system she has at home.

The answer is yes, of course Lyn Stanley’s London Calling sounds fantastic. As with her other albums, I’m really impressed by the sound of the double bass, the woodiness and the slaps and the sound of thumbs pulling stubbornly on big thick strings. (She uses two bassists on London Calling, veteran Chuck Berghofer and Michael Valerio.) Mike Garson also returns to the piano for London Calling, and if there’s a recording of him that doesn’t sound phenomenal, I haven’t heard it. He always has a light touch, and he makes such unusual and compelling choices on the keyboard. An added bonus is “featured artist” John Chiodini on guitar–his performances are way out front and fantastic, and he has the same tactile touch and sensitivity to the material as the others. (That includes pianist Christian Jacob and a slew of drummers and percussionists such as Paul Kreibach, Aaron Serfaty, Luis Conte and Brad Dutz.) If you have any doubt as to the pedigree of this album, I’ll just mention that it was mastered once again by Bernie Grundman.

What makes Lyn Stanley’s London Calling so vital and so entertaining is that true, dyed-in-the-wool Julie London fans should love it. I know I do. Lyn starts off the album with “Goody Goody” and retains that youthful anger and regret without sounding mawkish. Her “Cry Me a River” is as straightforward and faithful as it should be, since reinventing it might lose those hardcore London-ites. Lyn’s not afraid to include London’s more adventurous turns that she took later in her career, such as a searing version of “Light My Fire,” but she’s singing it with that same honesty and that same commitment to the lyrics. Not every jazz singer understands the essence of London, how her unique sex appeal grew out of a complete lack of pretense, but Lyn Stanley does, and I’m glad she recorded London Calling.

And now, I can’t wait to hear the LP!

When I walked into Jeff Joseph’s room at High End 2019 in Munich, I thought of one thing–Orange Creme. Coca-Cola has just come out with an Orange Vanilla flavor and is pushing it hard here […]

Notable Audio Products is the distribution side of Jeff Fox’s Command Performance AV dealership in Falls Church VA, and Jeff had sort of a late ’90s New York Yankees approach to RMAF 2019–stack the room […]

You’ll note that we’re not calling this the Best Albums of 2017. There are plenty of those lists out there, and they are pretty much dominated by this year’s critical darlings with some heavily promoted […]