Since the pandemic hit, most of us are just trying to make it from one day to the next. A small few of us are making it easier for everyone, through music, through the fight for social justice, and sometimes the intersection of the two.

Ezinma (pronounced eh-zee-mah) is a classically trained violinist who became a sensation when she started posting videos of her classical covers of trap hits. She then toured with Beyoncé and has also collaborated with Stevie Wonder and Mac Miller.

While I’ve enjoyed her instrumental interpretations of electronic music, her new song, and accompanying music video that dropped on August 28th, “Beethoven Pleads The Fifth” on Decca Records (Universal) was more exciting to me as the reverse: a beats-backed interpretation of a classical standard, Beethoven’s Fifth Symphony.

Few pieces are as iconic in the classical canon as Beethoven’s Fifth Symphony. Its quarter rest, four eighth-notes, one half-note motif is iconic, and as 2020 marks the 250th anniversary of Beethoven’s birthday, the classical world has been producing Beethoven albums this year with fervor. The Berlin Philharmonic, Vienna Philharmonic, and famed musicians such as Itzhak Perlman, Pinchas Zukerman, Daniel Barnenboim are just a few of the names who are releasing albums of Beethoven symphonies, violin and piano sonatas, and piano trios this year.

A beats-backed interpretation of a classical standard

But there’s a difference between celebrating Beethoven with the classical audience and championing him to the broader world. While the leading voices in the classical world are performing brilliant interpretations and deserve our attention (though Igor Levit, my personal classical crush, could probably stand to receive less of my album cover gazing), they are not releasing brilliantly crafted music videos that attract new listeners into the fold.

That’s something Ezinma is not only doing but doing brilliantly. Even the name of the piece, “Beethoven Pleads The Fifth,” clues the listener into the fact that Ezinma is making music during a political moment and that she is engaged with the movement against the unfair policing of Black bodies in the United States. In the United States, Black people are forced to learn their rights because they might be questioned, or worse by the police at any time. There’s ambiguity in the title too. Is Beethoven pleading the Fifth because his music challenged the power of the Church and the political authorities of the time? Or is Beethoven pleading the Fifth because the classical world is staying far too silent during a time of national and international reckoning about the racist systems that continue to jeopardize Black lives?

What’s for certain is that Ezinma is working on changing this by expanding who is learning the classical instruments and idioms. As COVID-19 has been raging, she has been working with New York City Public Schools to provide elementary school children violin educations after school hours, and she is developing her own non-profit that will provide children of all backgrounds the full experience of music education usually allotted to only the most privileged: their own instrument, quality instruction, and the ability to attend concerts of brilliant performers.

The video is a showcase of her deep understanding of the work she interprets, with the beats adding dimension and her violin narrating the emotional swells with perfection, but also of her belief in the ability of classical music to empower people, especially people of color. In the video, she performs in several outfits, stunning gowns, but also a black hoodie echoing the movements against police brutality where protesters have often worn hoodies to draw attention to the circumstances of some of the innocent slain. She also swims with her violin and cradles it while paint drips on it. She treats her violin as sacred, but adaptive and resilient.

While in other genres of music, this video might seem tame, in the classical world, respect for the instrument aligns to a tight script. A friend of mine faced a chorus of online criticism for painting an old harpsichord with acrylic paint: in the Baroque era, tempera would have been used, thus, acrylic is an insult. This is too often the way of the classical world, vigilant gate-keeping of anyone who dares to modernize, at times accompanied with hand-wringing over low public interest and support. But the classical world is also nuanced, international, and, dare-I-hope, adaptive. What excites me is that musicians like Ezinma prove that the classical canon shouldn’t be laid to rest, instead it should be celebrated, made relevant, and performed with unapologetic brio. 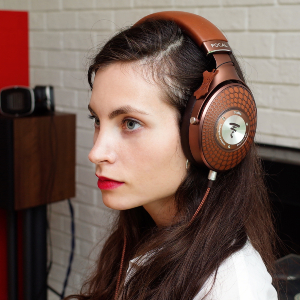 About the Author, Nan Pincus

Nan is a graduate of The University of North Carolina and Duke University. She writes about music culture and radio technology of all kinds. She DJs FM radio, operates ham radio, and got her first job in high school to save up for a belt-drive turntable. She works in classical music and theatre, but she often puts down her work to drop the needle on Scriabin’s Preludes and dream in technicolor.

Hi-Fi: Why Do Records Sound Better? | The Ivory Tower

Into The Groove Why do a lot of us audiophiles (and casual listener types) prefer the sound of records over the same music released digitally? Is it something about the inferiority of digital? Are vinyl […]

Hi-Fi: How Do We Listen? | The Ivory Tower

Recently a happy convergence in my schedule allowed me to spend several days doing lots of listening to my home stereo. Like 6-to-8 hour stretches. Vinyl only. Undisturbed for the most part except by Speedy, […]

2L Recordings, Three for the Winter Months Ahead | The Vinyl Anachronist

2L Recordings from Norway (website) tends to release its titles in clusters, and sometimes right before the holidays so that we secular folk can also have a soundtrack for the falling snow on the other […]