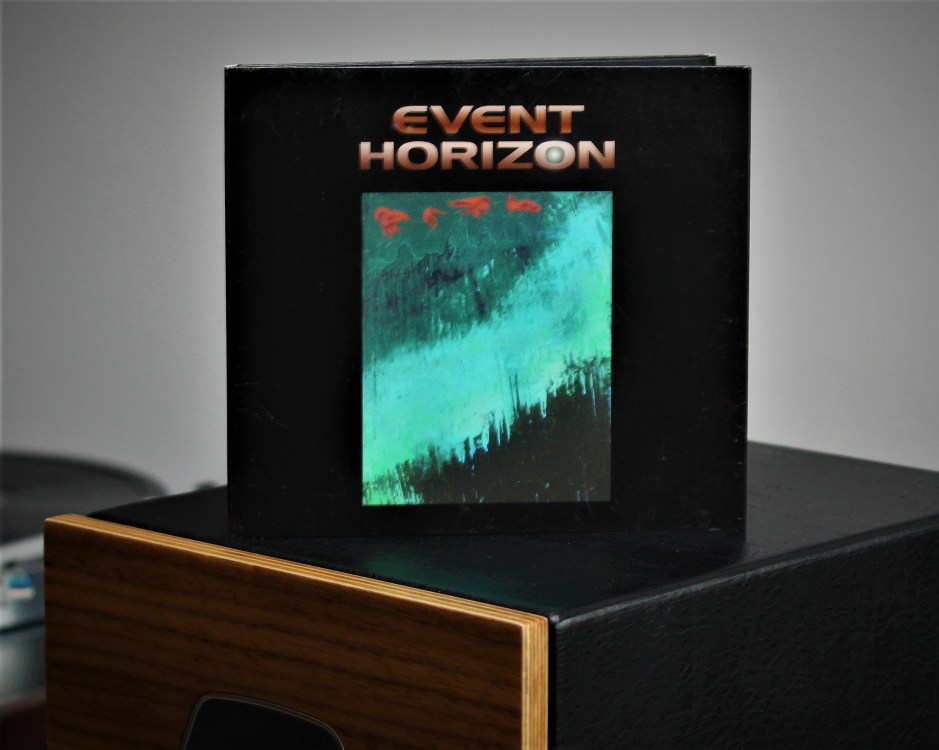 Event Horizon, the eponymous debut album from the Chicago-based quartet, arrived under strange circumstances. I had just read an article on the 1993 space-horror film of the same name, and how it has achieved cult status over the last few years because it’s so twisted and graphic and ultimately disturbing despite mediocre reviews and general box office floppage. After watching some of the more gruesome scenes on YouTube, I had just come to the conclusion that I sorta kinda wanted to see it. And then this album appeared, and I asked “Kismet?”

I wondered if Event Horizon, the jazz quartet, was as foreboding as the film–I immediately thought it would sound like a combination of Art Zoyd and Ornette Coleman. Instead, we get a lively and imaginative jazz quartet that prides itself at being fluent in several musical genres while staying ultimately true to jazz. Ostensibly led by “reed player” Jim Kaczmarek, Event Horizon is a quartet where all four members contribute equally. That’s unusual since this debut album is comprised of original compositions, which usually suggests a singular vision in the world of jazz. According to Kaczmarek, he’ll come up with an idea and the others–keyboardist Scott Mertens, bassist DonDeSanto and drummer Rick Vitek–will build upon that.

Those initial collaborations are so fluid, they bleed into the performances. It’s amazing how each member of Event Horizon is solid and assertive enough to grab the spotlight at any time. Given the space, each person commands attention. Despite these four strong individual  presences, a unity shapes these compositions into performances that are full of momentum and impact.

The synergy within Event Horizon is spectacular, but if I had to focus on one thing (like Chris Garcia’s drumming on yesterday’s Paraphernalia) it would be Kaczmarek’s expressive tenor sax. On “Guess Not,” a song about the arc of a romantic relationship, Mertens’ piano illustrates the honeymoon phase, all romantic and idealistic. Near the end, Kaczmarek assumes the lead with some angry blasting that captures those feelings of anger and regret. It takes a dizzying command of a music instrument to draw pictures that vivid, and that’s one of the many reasons why this album is so refreshing.

And no, I still haven’t seen the film. I’d rather listen to this again.

In the world of contemporary jazz, it doesn’t get any simpler than the Coachella Valley Trio and its new release, Mid Century Modern. Guitarist Doug MacDonald has joined with drummer Tim Pleasant and bassist Larry […]

Listening to Je Suis Africain, the latest album from Algerian singer Rachid Taha, I’m reminded me of one of my favorite albums of the last few years–Tinariwen’s Elwan, which I played for a crowd […]

Carolyn Lee Jones is a jazz singer, a performer who uses her rich and sultry voice to cover tunes from the Great American Songbook. I know, that doesn’t sound incredibly unique–we audiophiles already have plenty […]