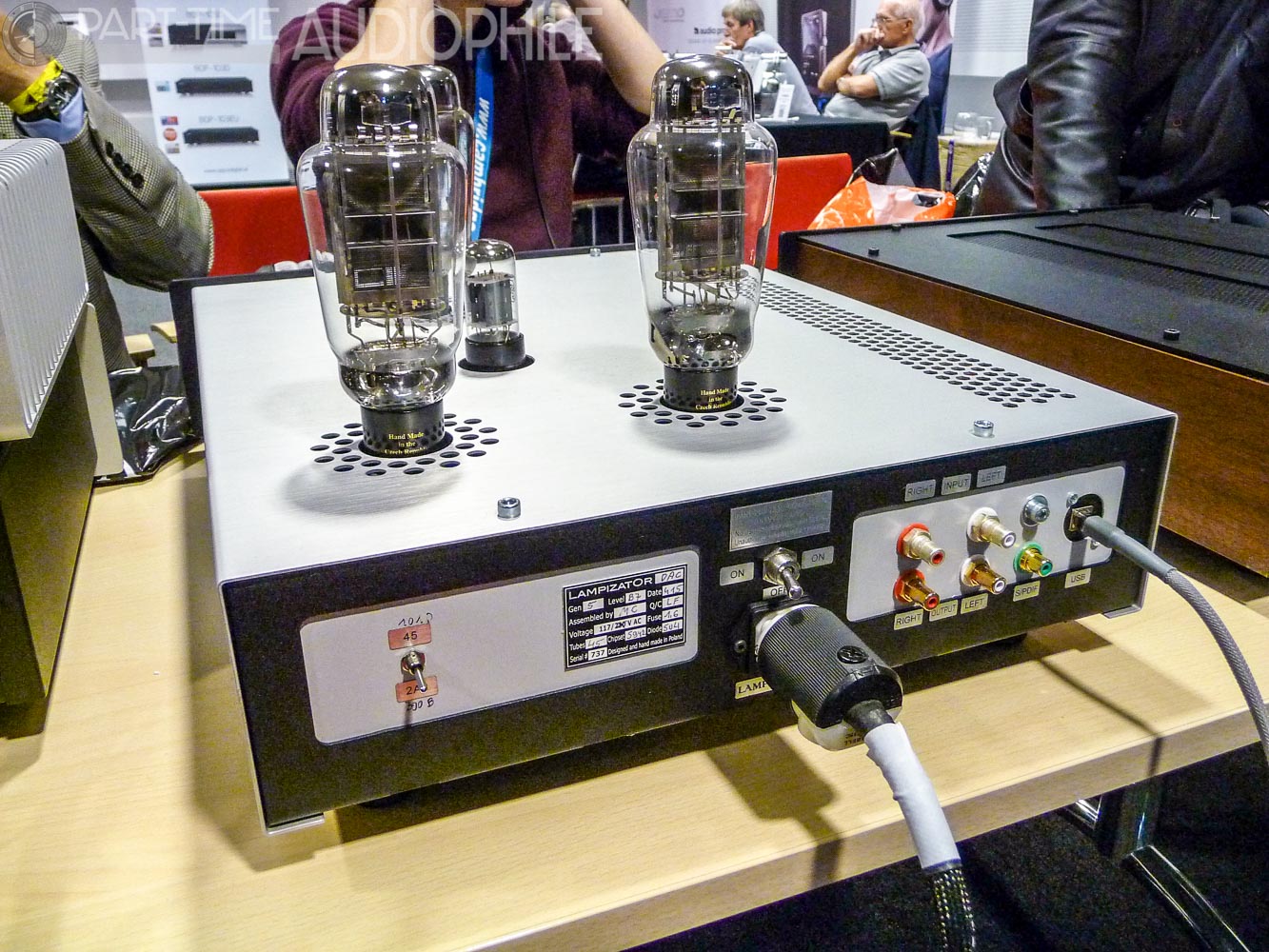 DACs have been hot for a few years now and the rate of improvement seems to be at least constant, if not actually improving. Apart from the conversion methods themselves (commercial DAC chips), obscure chipsets from non-audio applications, i.e., FPGA tech and “chip-less” low pass filtration schemes, the transport side (i.e., DAC input) seems to be currently en vogue (optimised USB/i2s/Ethernet/ST Optical, etc). Filters (closed form and otherwise) also have their fair share of attention. What does not ever go out of fashion is a high quality analogue output stage, though some now tout direct output from DAC chips, bypassing and obviating any need for a formal output stage.

With the above in mind, I want to highlight the interesting DAC rooms.

First up is the much ballyhooed and anticipated Dave (and to a lesser extent the mini-Hugo headphone DAC called the MOJO). The DAVE is a true-to-form Chord Electronics, with a funky bullet-proof over-built design. Yes, line up the Soviet tanks to take a run at this, and it will do no worse that the legendary QBD-76 did in that famous Youtube video. Solid as a rock? No … more so!

Dave employs a 28nm Xilinx FPGA that gives RW 166 DSP cores with which to do interpolation, filtering, etc. I think that 17th-order noise-shaping is used.

The designers own words:

So far early versions of Dave has been shown at a few shows and listeners have reported back about how unusual the depth perception is with Dave. Now this is due to the DAC resolving accuracy of very small signals – for some reason any small non-linearity of small signals upsets the brains ability to determine depth. What is curious is that there seems to be no limit to how accurate the linearity needs to be; Dave’s noise shapers are accurate to -350 dB and this was the performance required by depth perception. Indeed, the brain may be sensitive to even smaller levels, but 350 dB is the best I can do with current FPGA’s. But if you had said 2 years ago that one would need 350 dB performance from a noise shaper to get proper depth perception I would have said you were completely mad, as this is ridiculously small levels. But I have done thousands of depth listening tests, and always came to the same conclusion – very very small errors are significant. No doubt the sound science brigade will be on my back about this; but sound science is about observation not pet theories; and the observations are saying that something very weird is going on about depth perception (something which our understanding of how the brain achieves this level of accuracy is very limited).

By maximising the timing aspect, I got Dave to sound much faster, tighter and leaner – the perfect remedy to something sounding too soft and smooth. Now again this performance is engineering based and is fundamentally more accurate and transparent.

So what does this mean? Well against Hugo, Dave has much more depth, which you can easily perceive and you don’t need to do an AB test. If you hear depth that is deeper than anything ever heard from an audio system then you know something is better. But with Dave being at the same time faster tighter and more dynamic and also richer and darker than Hugo, then you need to do an AB test to perceive that aspect.

The DAVE sounds great with Redbook CD-quality files, and should at $12K+. It’s what I expected the Hugo to be (I am NOT a Hugo fan, but do own the Qute EX). Didn’t hear DSD on DAVE, so can’t comment, despite the new DSD filter (promising). I didn’t hear the Mojo either. The Dave was good enough to have me searching for the “lost” $75K from the MSB select DAC … at least for PCM.

BTW, the designer Rob Watts is quoted as saying that the noise floor in the Dave is and incredible -150db, and at this level, spatial info is uncovered and the brain can now sense the depth in the original recording. I don’t hear any of that in my 20+ minutes of audition, but I was still impressed with the sound quality. Dave was at the Sobieski Hotel.

Next up is the $89,950 MSB Select ( a Dac that offers direct output from the banks/modules of Dac chips themselves). To my ears, it has a typically high-end sound, as one would expect from MSB higher models, but the price does not seem justified just on a sound-quality basis. To my eyes, the design, while bomb-proof and extremely well machined/polished, is a bit uninspiring from a bling perspective. Competent and pleasant yes, attention to detail yes, but “art deco” … no. Still, I keep my flashlight handy as it was a brief demo. The DC-10 speakers they fed were looking like a downright  bargain at $32K! Maybe with more critical listening the value proposition with start to show? This was in the Stadium venue

Again at the Sobieski, showing the innards of their gear was Chinese maker Audio GD. The sound quality of the room was just decent, as I recall, but the innards of the Master 10 and amps were interesting to look at. A sea of components. It number of chips count, they are the undisputed value kings.

Moving on, I went to see the Amare room where there was some talk of their new tube DACs on the forums. There was no DHT DAC on display and the Modwright look-a-like has an ECC182 sticking out on top. The sound in the room did not live up to expectations. Not horrible, but I was prepared to be blown away and it didn’t happen. More hi-fi than high-end, but it could have just been a bad room. DHT DACs have a steep learning curve, and they have their hands full with even the small signal tube in their DAC. Their design aesthetic is nice and clean though.

Moving up the tube DAC chain, we get to the Aqua DAC at the Stadium. La Voce sounded excellent, but as they were mated to high quality electronics and speakers (Ars Sonum tube amp and standmount Diapason speakers), it hard to judge their individual quality. No cause for complaint though and the form factor is nice and svelte.The top of the Line La Scala was static display only in another room.

The Mytek room was quite welcoming as the Polish manufacturing partner and a tech support fellow were very friendly and fielded all my questions. Later I met Michael, the Polish designer and owner who was visiting from his current home in New York. I was given an explanation of the difference between the new (and cheaper) Brooklyn vs the premium Manhattan. Curiously, the Manhattan does not yet have an MQA decoder built in, but the Brooklyn does! They plan upgrades later on for Manhatten (cant have Brooklyn TRUMPing Manhatten now, can we)? They also plan a sort of turnkey ADC that will enable easy consumer vinyl ripping to high rate DSD/PCM for about €2K retail (software included). All sounded excellent through the (unfamiliar to me) Lipinski standmounts which seem pricey at €20K a pair, but I hear they weigh a TON and carried a big name in pro-audio before hitting the consumer market.

Finally, in one of the stadium CanJam rooms, I found the Lampizator Big7 HeadDaC, and a new prototype Amber POWER DAC with headphone jacks. They were mated with BeyerDynamic DT990 pro (250ohms) and T-90 (Tesla tech) headphones, as well as a mid-lower range Audio-Technica headphones. Speaking with Lukasz Fikus, the Lampi designer, he was thrilled at the feedback he got from the public who universally gave him a thumbs up. I am not really a headphone guy, so while I did enjoy the experience, I actually preferred the less expensive DT990 to the pricier T90 … which were clearly more detailed. I already am familiar with the Lampi sound, as I have a Lampi DAC, as well as iFi and Chord DACs to go with my LH “Geek out” and DSpeaker unit with its own PCM DAC section. The HeadDac was tops, but the PowerDac (12wpc EL84 tube integrated amp with built-in DAC) was not far behind. Chocolate to vanilla kind of thing.

Review: HiFiMan Susvara headphones, assault on the state of the art

February 24, 2018 Panagiotis Karavitis Headphones, Review Comments Off on Review: HiFiMan Susvara headphones, assault on the state of the art

This is not for the faint of heart, or wallet. If you think headphones have reached overwhelmingly high prices spare your time and don’t read this review. You have been warned. Walking down the Munich […]

There are over 400 brands exhibiting here at Rocky Mountain Audio Fest. Making this event one of largest audio shows in North America. For some this can seem overwhelming. and cause a bit of anxiety. […]