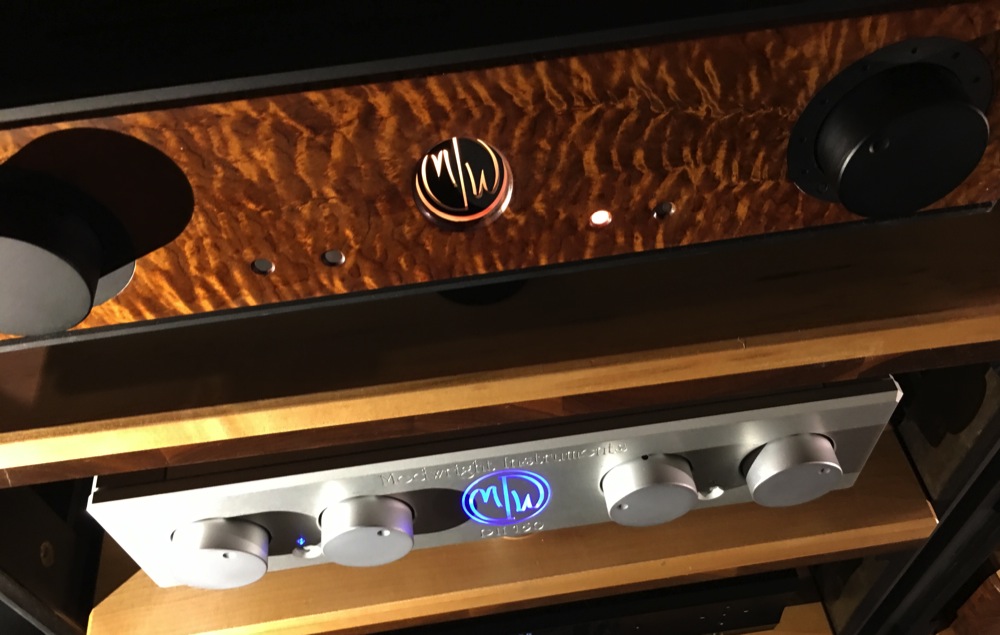 The 74-inch-tall transducer, the flagship of the Apollo line, features a narrow top unit containing two 10-inch woofers, two five-inch midrange drivers and two one-inch soft-dome tweeters. That module looks like it’s sitting on top of a slightly wider and deeper sub cabinet, but in fact the lower box is empty and is bolted to the tower. The base has a hole to allow air being pushed above by the woofers to enter, adding to the air already in the bottom box, which then exits via a port.

“This increases the volume of air the woofers can move,” Daedalus president Lou Hinkley told me during a demo at the Rocky Mountain Audio Fest, where the Zeus made its debut. “I could have left the speakers without the bottom unit, but they would not have been as smooth.”

That liquid presentation was joined by impressive detail, a wide soundstage and bass that was both deep and nimble.

Those attributes were gleaned from a couple of test tracks. The first was an unreleased recording of mandolinist and A Praire Home Companion host Chris Thile giving a workshop. The performance was part of the personal collection of The Absolute Sound reviewer Steven Stone, who was finishing up his audition when I arrived. Thile’s voice and instrument sounded like they were in the room. A good start.

I followed with a request, the Cowboy Junkies’ laconic cover of Lou Reed’s “Sweet Jane.” The version Hinkley found for me was live, from the 200 More Miles LP, an early period when lead vocalist Margo Timmins still was practically whispering the lyrics. On the Zeus speakers, Timmins’ hushed delivery was distinct and textured. It also was enjoyable to listen to the swirl of instruments around her, as each seemed to receive its own aural spotlight. Pacing on the track was excellent as well, with brother Michael Timmins’ rhythm guitar locked in with bassist Alan Anton and drummer Peter Timmins.

Overall, there was a cohesiveness to the presentation that reminded me of a single-driver, point-source design. I quit listening to various parts of the frequency spectrum and just absorbed the music as a whole. 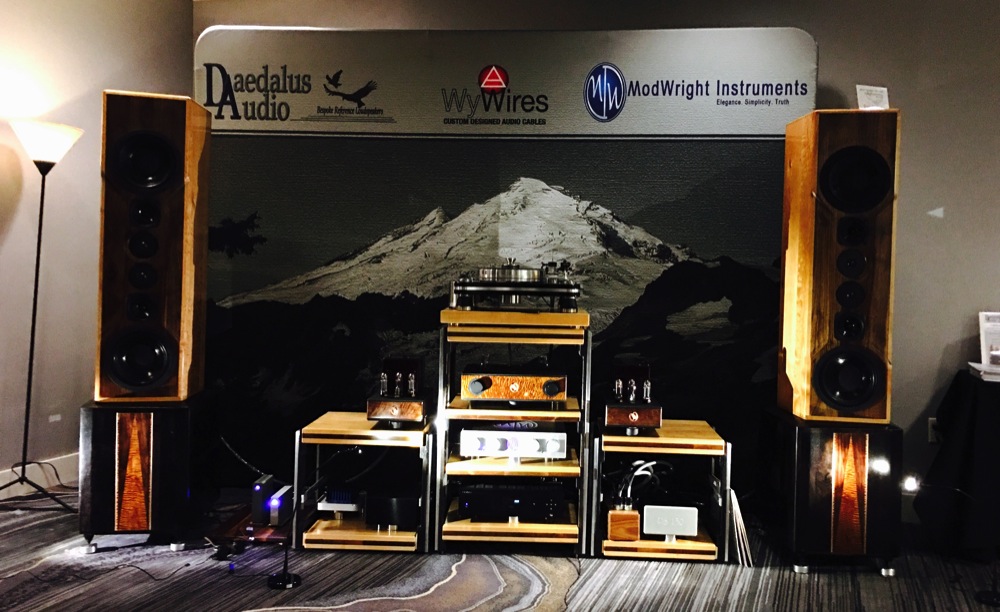 The Daedalus Zeus speakers (price TBA) were no doubt aided by their associated equipment, which included four components from tube stalwart ModWright Instruments. Dan Wright was showing his new Ambrose One, an artisan-built, balanced, Class-A line stage ($12,000 USD), his Ambrose A30 monoblocks ($16,000 USD/pair as displayed in a specialty wood trim), PH150 phono stage ($7,900 USD) and tube-modified OPPO UPD-205 disc player/DAC ($2,500 USD for the modification, plus $1,320 USD for the stock player).

The woodwork on both the Zeus speakers and ModWright’s components was beautiful. The Zeus speakers had gorgeous inlays and were coated in a deep lacquer finish. The transducers were so new that the exteriors still were slightly sticky to the touch, as I found out when I clumsily grabbed a cabinet edge as I tried to climb out from behind after taking some photos. Luckily, Hinkley, who had wedged himself behind the speaker himself, did not seem too bothered. “Yeah, it’s still fresh,” he said with a welcome smile.

Hinkley is a big believer in vibration control, which undoubtedly plays a role in his speakers’ excellent solidity and imaging. AT RMAF, he was using his DiD-SPK isolation devices on each Zeus tower (starting at $80 USD each) and DiD supports for the electronics (starting at $480 USD per set). 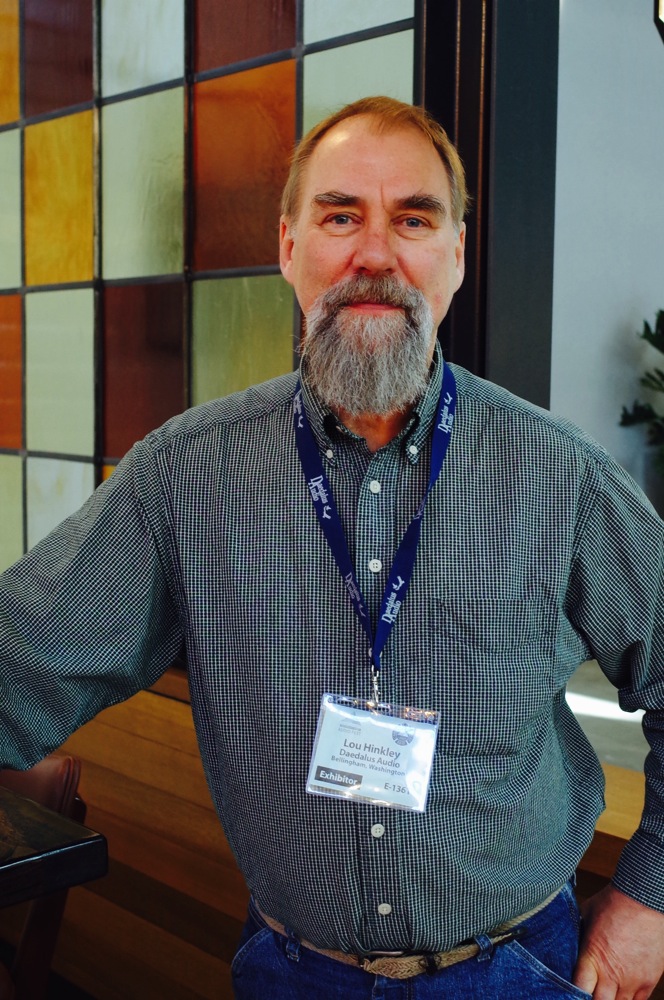 Hinkley introduced the Apollo series last April at AXPONA in Chicago. He showed the entry-level model there, a three-way tower. Since then, Daedalus has added the Apollo 11, a larger design with one 10-inch woofer and dual midranges and tweeters. The Zeus ups the ante with its additional woofer and base cabinet.

Daedalus has been making particularly good sound at shows for a while now. With the development of the Apollo series, Hinkley’s company has taken another sonic step forward and should be on the short list for anyone looking for a reference-level, full-range speaker.

A photojournal by Eric Franklin Shook You can’t just say “It’s awesome, buy it.” Eliciting a gut reaction of confidence in consumers who speak your name in conversations of top tier service and products is […]

Fans of the site know that Bricasti Design has been an in-house favorite for years. Contributing reviewer John Richardson recently reviewed the M1 Classic, an experience that set a highwater mark for reference sound in […]

Aesthetix has always intrigued and perplexed me, in pretty much equal measure. By many reports, Jim White & Co. make some of the most sophisticated tube gear on the planet, and the heroic lengths they’ve […]