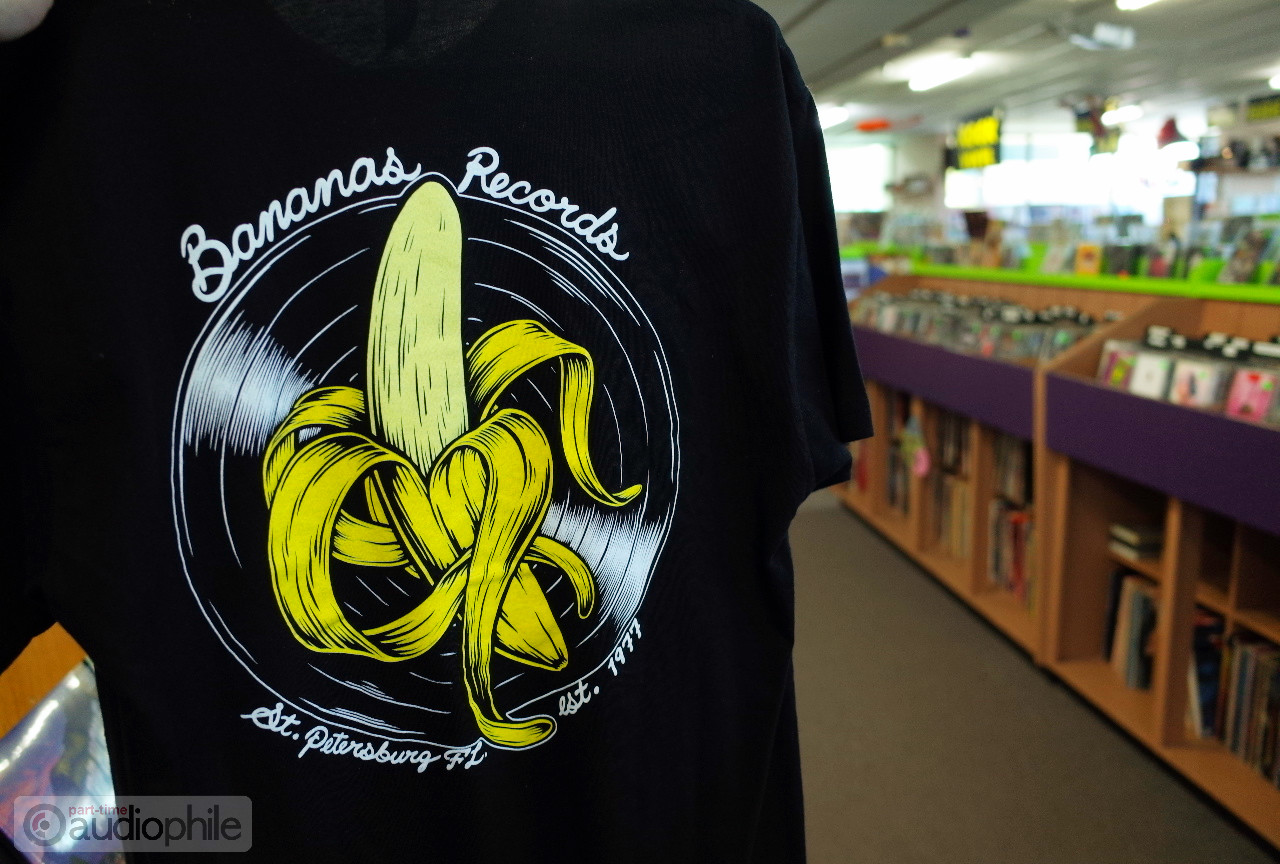 Originally opened as a book store in 1977, by founders Doug and Michelle Allen, things quickly escalated into the store selling more and more records, while eventually stepping away from book sales altogether in just a few short years. Fast forward to present time, and you’ll find that Bananas Records more than lives up to its claims to fame. But let’s dive into one detail. Bananas Records is actually three locations in St. Petersburg, Florida.

They are as follows…

Knowing that the Florida Audio Expo wouldn’t have to drag me kicking and screaming into sunny February skies of Tampa, stepping outside of the audio show to soak up some rays was not only warranted, it was mandatory. A quick google search revealed that Bananas Records CDs, DVDs, & Vinyl was just a twenty-minute Uber ride from the Hilton Westshore that was hosting the audio show.

They say, great minds think alike. So it was no surprise to me when the “vinyl aficionado supreme”, the “senpai of vinyl records”, Michael Fremer (Stereophile and Analog Planet) approached me in the hallways of the Florida Audio Expo and asked me about going with him to Bananas Records.

Michael and I do share a small record shopping past. A few years ago in Charlotte, North Carolina a small group of industry folk went record hunting at the local Manifest Disc, which itself is a vinyl lover’s sight to behold. We had so much fun that day, it had to become an article.

Read here: Manifest Disc, Like Kids in a Candy Store 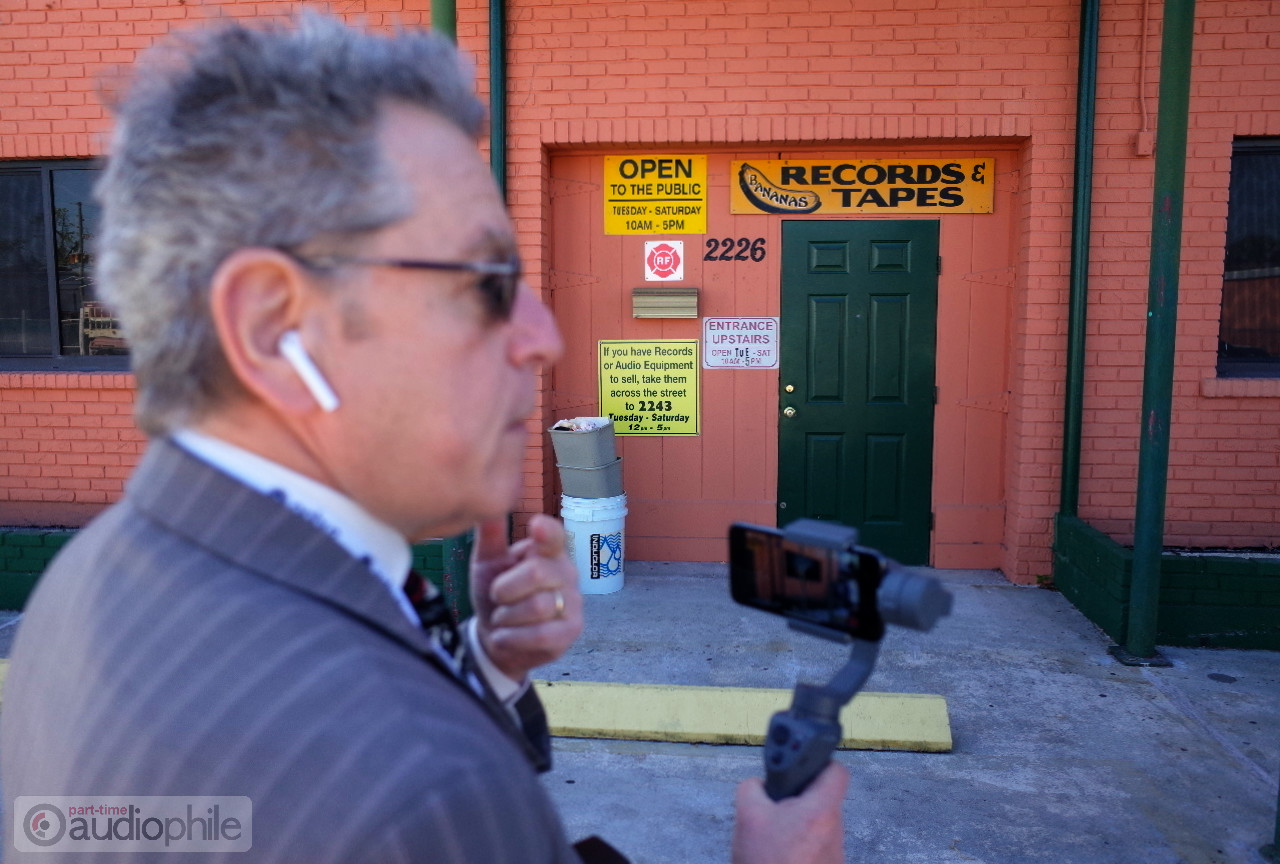 Our first stop was the Bananas Records: Vinyl Warehouse, which is open to the public and easily lives up to the three million record inventory boasts made before. It however, is as it sounds, a warehouse. Nothing about this location screams retail, as it more resembles a library, especially considering that some shelves are off limits to the general public and marked “Staff Only.”

Our second stop was across the street at the Bananas Records: Audio Equipment Sales and Service warehouse. Again, a warehouse (also open to the public) jam packed with stereo receivers, turntables, integrated amplifiers, speakers big and small. One could get lost in there, if not careful enough to leave a trail of breadcrumbs leading the way out.

Our final stop for the day, should likely be your first — Bananas Records: CDs, DVDs, & Vinyl. This is the ideal Bananas Records experience. Imagine a record store that took over an entire city block. Retail in every way, this is the record store experience I was looking for. A entire stage for live performances almost goes unnoticed for the sea of records shelves that litter the landscape. If that isn’t enough, there are alcoves galore with more records by genre, and a room dedicated to audio equipment sales.

And just when I thought I had seen it all… another warehouse?

More warehouse, but with a true retail appeal and open to the public. At one point I heard Michelle Allen (co-owner/founder) of Bananas Records say, “$1 Records” and my eyes lit up.

Once the cameras were down, and Michael and I were free to roam the store, it was apparent just how big Bananas Records truly is. Prices were more than fair, in fact, plenty were a downright steal. The curation was strong, and organized. Records I thought I’ve never see in a store were on the shelves with multiple copies.

Is it worth the pilgrimage? Undoubtedly, YES!

Almost every time I go to a hifi show there they are. Like peas, and carrots: Classé and Bowers & Wilkins. Now, there’s a reason this pairing has been going on so long, and it’s […]

The French wunderkind of advancing digital amplification is at it again. Devialet is getting into television audio in a big way. Having smashed into the audiophile world head-on, this time they are targeting the cocoon […]

I may have misspoke, or left a few of my earlier proclamations about the newest VIMBERG speakers less than acutely defined. If you are a listener of our Occasional Podcast, or reader of our little […]