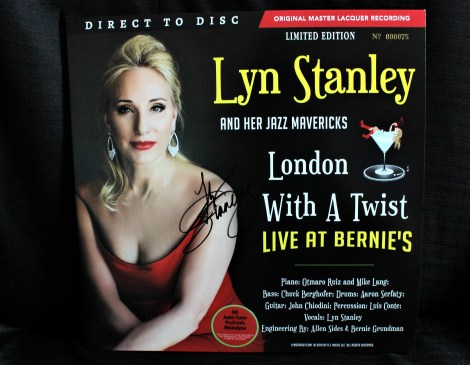 When I received my LP copy of Lyn Stanley‘s London With a Twist: Live at Bernie’s, I got the Super Primo Ultra Edition. Many of you will only splurge on the numbered Limited Edition LP, a two-LP direct-to-disc 45 rpm set that was not only mastered at Bernie Grundman‘s studio but recorded there as well. Your copy might even be signed by Lyn, something she’s dedicated to doing for her fans. With the Super Primo Ultra Edition, however, you get to meet Lyn at Ocean Way Recording with recording engineer Allen Sides and then get driven by Lyn to Bernie Grundman Mastering where Lyn will show you how and where everything happened. As you listen to this album for the first time, both Lyn and Allen will give you insights into what happened during the recording and how difficult it is to pull off a direct-to-disc recording in this day and age.

That’s the version I got, anyway. They might be sold out now.

London With a Twist isn’t just a reference LP for audiophiles, something I’d bring along to high-end audio shows back when I was an exhibitor and wanted to wow the attendees. (Although I’d totally do that.) This is almost as pure as it gets for audiophiles like me, unless you have access to the master tapes. London With a Twist is, to quote the back cover, a “Live to Metal Lacquer Recording. There have been no alterations to any part of this music during the post production stage.” This album, an offshoot of her now ambitious Julie London project that began with London Calling, was recorded by Allen Sides and his assistant Steve Genewick, with the lacquer mastered by Bernie Grundman. Lyn isn’t afraid to discuss the technical aspects of such an endeavor: “Reel to reel capture was as recorded to Recording of The Masters (RMGI) Studio Master tape 468 at 30ips. PCM file was also captured at the time of recording to 192/24 bit.”

I waited a few weeks before I listened to London With a Twist at home. My analog rig has been going through a few changes–I’ve been using the Technics SL-1200G turntable for a few months now–the review in The Occasional is coming soon, I promise–and I just bought the ZYX Bloom 3 cartridge and I wanted to give it a chance to break in. In addition, I’ve just added the Lab12 Melto2 phono stage from Greece and it’s made a heck of a first impression. I’m finally ready for this LP.

Here’s what you get with London with a Twist–four sides, three songs per side, all performed live in a single take. These are all songs you know, everything from “Route 66” to “Blue Moon” to “Lover Man” to “In the Still of the Night,” some inspired by her work on London Calling and some an extension of that inspiration such as Springsteen’s “Pink Cadillac.” Lyn’s gathered some true legends for her Jazz Mavericks such as pianists Otmaro Ruiz and Mike Lang, drummer Aaron Serfaty, guitarist John Chiodini (who acted as band leader) and percussionist Luis Conte. You can almost hear Lyn say “I need only the best for this.” And she got it. 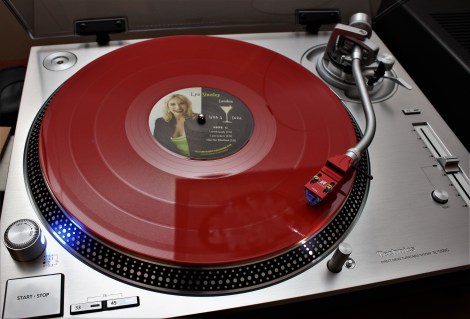 This recording sounds as stupendous as it, er, sounds, with a very warm and natural balance and tons of air around the performers. With the Super Primo Ultra Edition, you get Lyn pointing out intriguing details such as the fact she had a slight sore throat that day and you can hear it in a couple of places (I couldn’t, but I trust her ear and her knowledge of her own voice), and that you can hear the cumulative energy and elation when the band gets toward the end of the album on “In the Still of the Night” and they know that they’ve almost made it to the end. You hear that live, realistic presentation all through the performance, which carries over into the space between the songs when you hear the shuffling of sheet music and the muffled sounds of people getting ready to start the next track.

As for the quality of the LP pressing of London With a Twist, wow. Just wow. You know you’re listening to a great pressing when the dead wax is almost completely silent. When each side runs out, you hear only the slightest bump. That’s not as important as the actual music, of course. But it does tell you how low the noise floor is, and how much music is going to make it to your ears. I do have a tip for people who have purchased this LP–give it a good wash before you play it for the first time, something you should do anyway. I noticed some red curly-cue vinyl shavings in the grooves. It wasn’t a big deal–in fact, it gave me the feeling that this was fresh out of the oven, so to speak.

I do own quite a few direct-to-disc LPs, and the vast majority of them sound quite spectacular. It’s a great recording approach that should never die, despite the difficulty in pulling it off successfully. Lyn Stanley, Allen Sides and Bernie Grundman, along with everyone else involved, took a big risk with London With a Twist, but it paid off. It sounds exquisite and as real as Lyn Stanley sitting next to you, providing you with her illuminating commentary as you listen. Highly recommended.