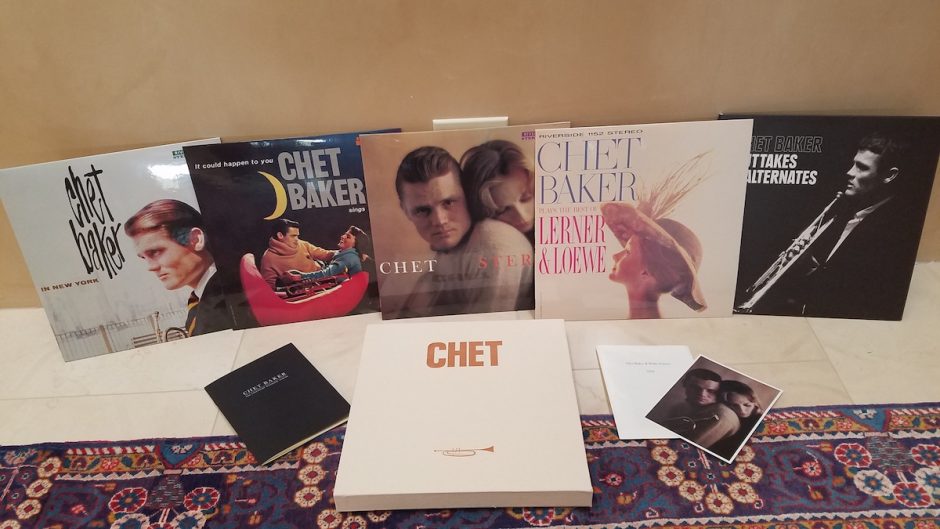 It was early October and I was on vacation in Europe when, through the wonders of modern technology (a.k.a. my smartphone), I learned that Craft Recordings would be releasing a five LP box set of Chet Baker The Legendary Riverside Albums.  Given that the two Chet Baker discs in my collection were in execrable condition, it took me about a nanosecond to check out the website and order a set.  How could I pass it up, especially since early orders also received a free Riverside t-shirt?  What an inducement!  I don’t know about you, but I can always use another t-shirt—and more LPs, of course.  The site indicated that the set wouldn’t be shipped until the first week in December, but it didn’t arrive until December 20th:  smack dab in the holiday season, and a perfect time to receive a gift—from me!

Since I wasn’t remotely familiar with any of the discs in the Legendary Riverside Albums set (my own Baker LPs are from later in his career), there was always the possibility that I might not cotton to the performances or the sound or the pressings or the t-shirt or some combination thereof and wind up with buyer’s remorse.

No remorse here!  Both the set and the t-shirt met my musical, sonic, and fashion expectations. 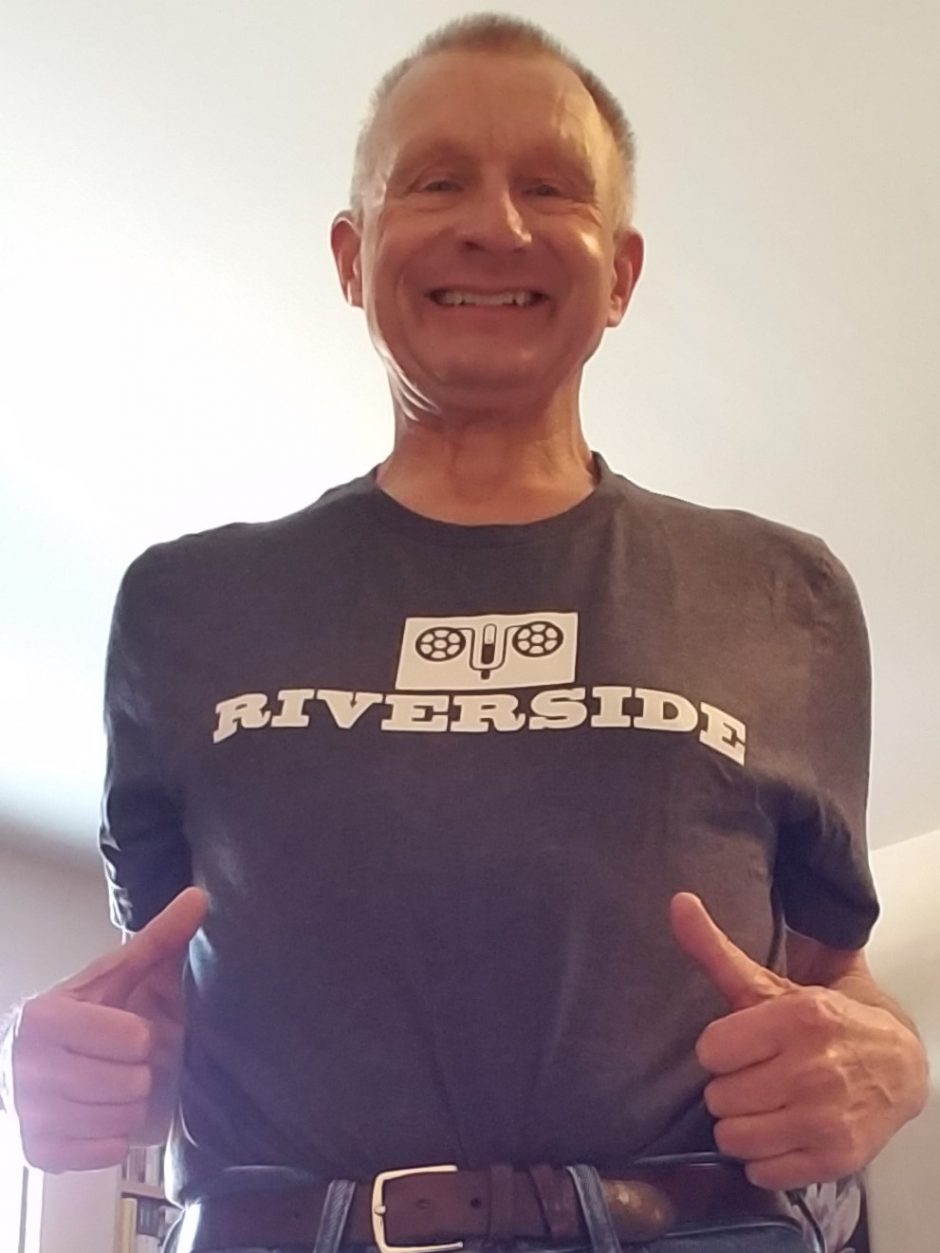 If you don’t know Baker’s story, it’s probably best summarized by saying that he was obviously talented and just as obviously self-destructive; the classic—and too frequently told—tale of a gifted but flawed artist that ends in tragic circumstances.  For Baker, the end was on the street underneath his second-story Amsterdam hotel window on May 13th, 1988, the victim of what was officially described as an accidental death.  To his credit, he managed to sufficiently come to grips with his demons and mishaps (e.g., his front teeth were knocked out as a result of a beating in San Francisco) that he was able to ply his art until the day he died.

I’ve always enjoyed Baker’s trumpet work and, even though he’s not my favorite tooter (that would be Dizzy Gillespie), his style always struck me as a relaxed, thoughtful, and ingratiating mix of non-schmaltzy lyricism.  And yes, the style mostly on display here is what was known as “cool jazz” or “west coast jazz,” as opposed to bop, hard bop, or “east coast.”  But let us not obsess on categorizations.  However you classify him, Baker’s talent was evident to fans and critics from the beginning, which is why he won the New Star award in DownBeat’s first International Jazz Critics Poll in 1953.

The Legendary Riverside Albums set provides a heaping helping of Baker’s years immediately after his breakthrough work with Gerry Mulligan, to wit, the four Riverside discs released between 1958 and 1959:  Chet Baker in New York (RLP 1119); It Could Happen to You:  Chet Baker Sings (RLP 1120); Chet (RLP 1135); and Chet Baker Plays the Best of Lerner and Loewe (RLP 1152).  Chet’s the leader on each of these records and is backed by various combinations of some heavy hitter sidemen, including Bill Evans, Pepper Adams, Kenny Burrell, Paul Chambers, Kenny Drew, Johnny Griffin, Philly Joe Jones, Herbie Mann, Zoot Sims, and others.  The set is rounded out with a bonus LP of outtakes and alternates.

Spin any random LP from this set and you’ll immediately know why Baker was so highly regarded.  And, if you happen to start with the earliest (Chet Baker in New York), you’ll find that Baker’s style extended beyond the west coast school.  This disc demonstrates that he had the chops to cover some edgier stuff (“east coast”) than he typically recorded, while still maintaining his distinctive style.  And that style—assuming it appeals to you—along with the support the outstanding collaborating musicians provide is what makes these LPs so eminently listenable.

When it comes to Baker’s vocal work (Chet Baker Sings), I wouldn’t say I find it totally captivating, but it is, for lack of a better word, intriguing and, most importantly, appropriate to the material he’s singing.  Frank Sinatra or Mel Tormé he ain’t; nevertheless, he has an almost artless style that vaguely reminds me of a male version of Astrid Gilberto. Whatever minor artistic reservations I may have—and remember, I’m no expert—they certainly haven’t stopped me from playing (and enjoying) the Sings album a number of times already.

Sound-wise, these LPs are totally excellent.  And very few allowances need to be made for late-fifties early stereo.  There’s still a bit of muffled piano sound on some of the cuts (but not all) and I noticed a few odd variations in the soundstage and instrument placement.  For example, on the It Could Happen to You disc, the position of Kenny Drew’s piano is on the far-left side of the image on some cuts, while on others it’s on mid-right side—almost like an “enhanced mono” presentation.  On the Lerner and Lowe disc, it appears that the engineer had just discovered the reverb control, which was promptly dialed up to 11.  Baker’s trumpet sound survives this treatment reasonably well, but it was annoyingly overused on the sax, especially Pepper Adams’ baritone, which was reduced to murky, muddy blats.  The Outtakes and Alternates presents a curious sonic picture, especially the first cut, “It Could Happen to You”, where the image is squashed and less colorful compared to the version used on the Chet Baker Sings LP.

However, none of these nits takes away from the musical enjoyment of this set:  merely idiosyncrasies inherent in many of the recordings of the era.  And what recordings from any era don’t have a few idiosyncrasies?  The bottom line is that the quirks that I heard on playback were certainly not a function of the pressings, mastering, or attention to the other myriad details that are involved in producing these outstanding reissues.

And, speaking of attention to detail, the packaging and accompanying materials are first-rate, too:  beautifully laminated record jackets, cloth-covered slipcase, etc.  Although I found the 24 pages of notes by Doug Ramsey mildly interesting, the notes on the album backs were far more compelling to me because they capture moments in time, as opposed to a look in the rearview mirror; but, as always, your mileage may vary.  Also, the inclusion of the photograph of Baker and Wally Coover was a head-scratcher:  what exactly am I supposed to do with it?  Moon over Wally or Chet (or both)?  All in all, though, I applaud Craft Recordings’ determination to put together such a comprehensive package.

Finally, I’d be remiss if I didn’t say that this set is quite reasonably priced—even without the t-shirt.  And I’d also be remiss not to say that Craft recordings deserves our support, along with others who keep the vinyl flame burning.  So, do yourself a favor and buy this set, even if you’re only vaguely interested in Chet Baker or 1950s jazz.  I don’t think you’ll regret it.

You can order Chet Baker, The Legendary Riverside Albums here on Amazon. If you want the “t-shirt” version, be sure to order from Craft Recordings.

Darryl Lindberg is a retired executive living in Santa Fe, New Mexico. Although he gets a good deal of exposure to live music via season subscriptions to Santa Fe’s various opera, orchestral, and chamber music groups, Darryl believes a great sound system is the only practical means invented by modern technology to experience the work of long gone (i.e., sleeping with the fishes) or simply inaccessible artists and their performances—at least in his current temporal existence.  And he has plenty of software to stimulate his auditory contemplations, given that he’s amassed and continually adding to a vinyl collection of well over 10,000 records.

Audio being a hobby (this is the Part-Time Audiophile, right?), Darryl spends much of his non-listening time volunteering for various worthy—depending on your point of view—organizations.  In addition, he hosts a weekly program, “Tuesday Night at the Opera,” on Santa Fe’s public radio station, KSFR (7:00-10:00p.m. Mountain Time; streaming live on www.ksfr.org). Further background may be obtained from his parole officer.

As I stood mutely at the front of the crowded room I couldn’t help but wonder if I’d stumbled into some kind of church, or worship service by accident. There was powerful keyboard music with thunderous […]

DVL Audio Album of the Month for August – Julius Lester

This is the second in a monthly series of album reviews I will be doing for DVL Audio here in Canada. I’ll be heading out to a local record store in Vancouver, digging through the bins, and […]

by Paul Ashby In late September Parlophone and Rhino partnered for release of a Tony Visconti-remastered box set of Bowie’s “Berlin Trilogy” (and beyond) albums, and the project’s been getting a lot of press — […]