I’m not seeing a lot of hands, and probably with good reason. There’s not a lot going around, and those that are around (and in good working nick) are so prohibitively priced to make even hardened, cash-rich audiophiles pause before clicking “but it now.“
These 1952 NOS, black plate 300B matched pair were going for a cool $5,000.

Also, there are the fakes, copies, knock-offs, etc. Some people swear the the original WE 300Bs are the pinnacle of this tube type, others say “not so much…”

Regardless, there’s no denying an air of the exotic, and mysterious surrounds the tube which is now the stuff of legend. Apparently WE is threatening to start production of the vaunted 300B once again (they’ve been doing this for years apparently), so be forewarned, even though this is a press release, and they are claiming the tubes will be shipping in September 2018 for $1299 a matched pair, I wouldn’t hold your breath. That said, it would be great if they did, and the new ones sounded as good as the old ones… might take the wind out of prices.
The return of the 91A should be interesting as well, but again, any “updates” or “improvements” over the original circuit, or changes to materials may not necessarily mean an improvement in sonics. 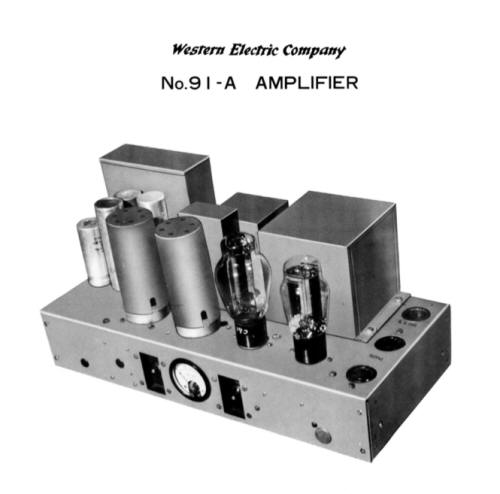 Charles Whitener  (President, Western Electric) writes:: “It is my distinct pleasure to announce that the WE 300B electron tube will re-enter production this year, in time for its 80th Anniversary. The famous triode was developed at Bell Labs in 1933 in the form of its predecessor, the 300A, which was modified, patented, and then produced at many historic works facilities beginning in 1938. The 300B has journeyed from the original New York tube shops, to the legendary Hawthorne Works, Allentown Works, Kansas City Works, then the Huntsville Works. The sparkling new tubes that will roll off the line this September will be assembled here in Rossville, Georgia at a new and reimagined electron tube works facility. Furthering our commitment to manufacturing excellence, we are installing new hydrogen reduction ovens, automated cathode cleaning lines, new laser welding systems, a state-of-the-art water deionization plant, and an updated testing system with improved accuracy. However, the 300B will still be manufactured from its original tooling and assembly specification standards.”
Although we’ve invested in a modernized production line, many of its aspects will of course remain true to tradition. For example, the core material, the so-called “secret sauce” embedded in each cathode is derived from an original Hawthorne Works 1963 melt. Western Electric’s attention to each delicate detail and historic promise of quality place the WE 300B in a category of its own.
The new 300B’s will be priced at a reasonable rate of $1299 per matched pair or $599 for a single. They will also be available in quads and octets. Each tube ships with our peerless 5-year limited warranty starting September 1, 2018. By internal estimates, this is a conservative timeframe we can easily achieve, barring any unforeseen setbacks. A complex process like this involves many moving parts—literally—and we appreciate your patience.
In addition to announcing the availability of the 300B, I’d like to share some of our adventures in product development. Continuing our 80th anniversary celebration of the 300B, we are unveiling a new single-ended amplifier called the 91E, as an homage to its famous predecessor the 91A, first introduced in 1936. The 91E embodies a new proprietary Class A2 parallel feed current source topology (patent pending), combined with toroidal output transformers, and microprocessor controlled automatic bias. It will achieve in excess of twenty watts per channel—a never before realized level of performance for the 300B in a single-ended circuit.
Be on the lookout for a limited edition mono block set of this amp topology called the 91C Metropolis. Only 500 of these beautifully designed 300B amplifiers will be available.
Western Electric has been working hard to give our followers big things to look forward to in 2018. This is just the beginning! The best way to stay in the loop is to subscribe to our exclusive 300B mailing list and by following our newly launched social accounts. Or maybe we’ll see you at the shows, starting this April at Axpona.”

Periodic Audio makes a terrific set of inner ear monitors at very reasonable price points. Roger Skoff and I awarded their Be IEMs an Alfie Award at the LA Audio Show. And let’s be honest, […]

Some equipment just speaks your language. Pass Labs designs have always been a favourite of mine on the audio-show circuit. They construct incredibly musical components with real sonic muscle that never sacrifices air or detail, so […]

DENVER (PTA) — It was exactly one year ago at Rocky Mountain Audio Fest 2018 where we first encountered the Kanto Audio TUK self-powered loudspeaker system. The all-new TUK did impress widely with many of […]